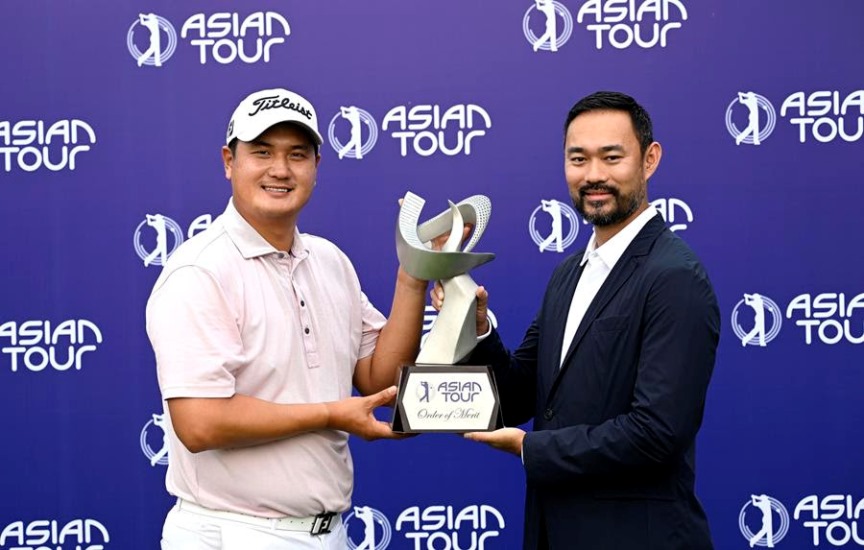 American Sihwan Kim completed the finest season of his 11-year professional career today when he wrapped up the Asian Tour Order of Merit title, appropriately on the day he turned 34.

Kim finished equal 28th in the Asian Tour’s season-ending BNI Indonesian Masters presented by TNE which was enough to repel a number of players in with a chance of catching him.

Vincent, Chinese-Taipei’s Chan Shih-chang, Canadian Richard T. Lee, and Thais Jazz Janewattananond, Phachara Khongwatmai, and Sadom Kaewkanjana, all had a chance of toppling Kim if they won today but their challenges faded on the back nine.

“It feels good, finally the season’s done and I can’t wait to get some rest,” said Kim.

“You know it’s been a long week with you know restarts and stuff like that. I’ve been traveling a lot, this is my 28th event of the year and I think my body needs some rest. I just felt it today where my whole body was just off sync and just couldn’t get anything done.

“Of course [finishing first] was on my mind, but I tried to not let that get to me too much. Been just kind of struggling with my putting all week this week and, and just barely made the cut after my Saturday restart. And yeah, it’s been tough, it always comes down to the last tournament and you know, Jazz [Janewattananond] and James Chan [Shih-chang] they were all up there, and Richard [T. Lee] was up there for a little bit, and if they had won they had a chance to chance to overtake me.”

He followed that up by winning the Trust Golf Asian Mixed Stableford Challenge, also in Thailand, in April.

A mid-season loss of form, when he was battling some swing demons and a stray driver, saw him relinquish top spot on the Order of Merit to Bio Kim but a third place finish in the International Series Egypt last month saw him regain first place.

Prior to this year Kim had been a perennial nearly man and had recorded eight top-four results on the Asian Tour since 2018, including two runner-up finishes, and had come close to winning on Europe’s Challenge Tour.

But all that is a distance memory for a player full of confidence for the 2023 season.