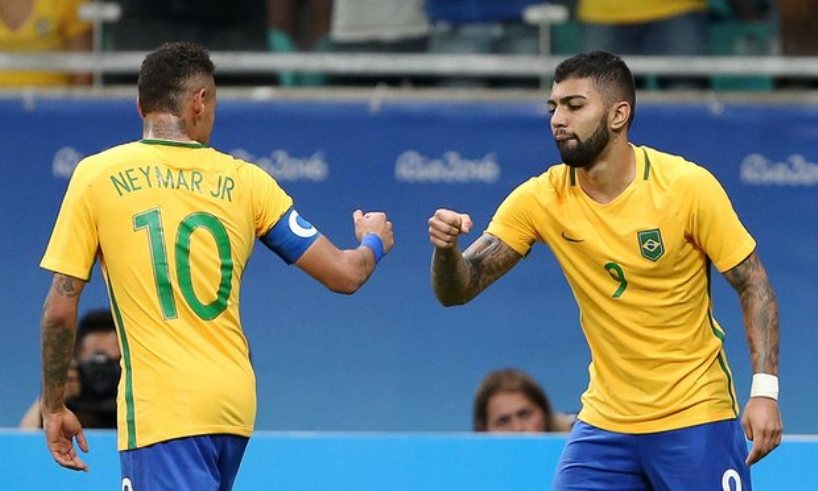 Sought-after starlet Gabriel Barbosa struck twice as Brazil’s footballers finally got their Olympic campaign rolling with a 4-0 demolition of Denmark on Wednesday, while their arch-rivals Argentina crashed out.

Barcelona star Neymar is still yet to hit the net, but he played the role of facilitator as Gabriel Jesus and Luan were also on target to end a run of over 200 minutes without a goal after stalemates with Iraq and South Africa raised fears of an embarrassing early exit.

Brazil’s much-needed victory sealed top spot in Group A to set up a quarter-final meeting with Colombia on Saturday.

“We showed a lot of patience, that was important and the fantasy arrived,” said Barbosa, a top target for a host of European clubs including Premier League champions Leicester City.

“It was a beautiful win. The first two games we didn’t play badly, but the goals didn’t come and sometimes the fans focus solely on the result.”

Crisis-hit Argentina didn’t survive a sluggish start as they were dumped out by Honduras, whilst 2012 gold medallists Mexico were also sent packing.

Colombia moved into the knockout stages by beating Nigeria 2-0 with captain Teo Gutierrez and Dorlan Pabon on target.

The Africans had already done enough to top Group B, rendering Japan’s 1-0 win over Sweden meaningless.

Denmark progressed despite defeat in Salvador as Iraq and South Africa played out a 1-1 draw in the other Group A match.

Portugal secured top spot in Group D with a 1-1 draw against Algeria in Belo Horizonte to set up a last eight meeting with Germany on Saturday.

South Korea face Honduras and Nigeria take on Denmark in the remaining quarter-finals.

Manchester City’s new recruit Jesus said before the game he didn’t care if Brazil’s sought after goal came “off a belly or a bum” and A Selecao got the luck they needed when Barbosa’s opener trickled into the far corner off his shin.

Jesus and Luan put the game beyond doubt either side of half-time before Barbosa fired in a deflected fourth 10 minutes from time.

Argentina needed to win to secure a place in the quarters due to their inferior goal difference with the Hondurans.

However, the Central Americans sprang a huge surprise as Antony Lorenzo’s penalty 15 minutes from time put them in front in Brasilia and, despite Mauricio Martinez’s equaliser deep into stoppage time, Argentina bowed out in embarrassing fashion.

The Albiceleste’s chances were severely hampered by chaotic preparation for the Games.

Coach Julio Olarticoechea, who had been coaching the Argentine women’s team, took charge just weeks before the tournament after Gerardo Martino resigned citing power squabbles at the Argentine Football Association (AFA) and clubs not releasing players.

“Honduras can’t beat us. A country for which I have a lot of respect, but they play baseball. They don’t know anything about football,” he told Radio La Red.

Argentina’s conquerors in the 2014 World Cup final, Germany, remain on course for another Brazilian party at the Maracana on August 20 as they brushed aside the hapless Fijians in Belo Horizonte.

Fiji benefited from New Zealand’s disqualification to qualify for the Olympics and conceded 23 goals over the course of their Group C games, having also been smashed 8-0 and 5-1 by South Korea and Mexico respectively.