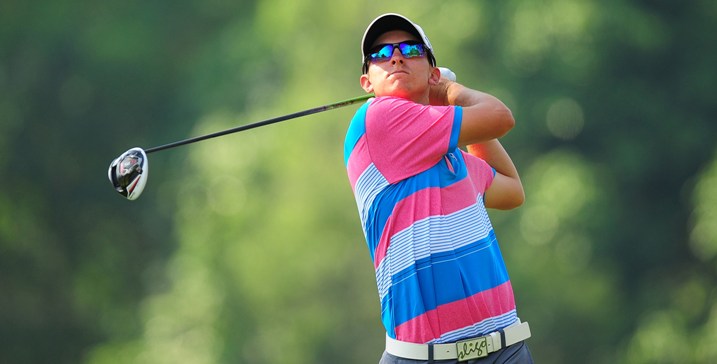 American John Catlin surged into a share of the penultimate round lead after posting two birdies in his closing three holes to sign for a superb six-under-par 66 at the PGM Darulaman Championship on Friday.

The 25-year-old, chasing for his maiden Asian Development Tour (ADT) victory, fired seven birdies against a lone bogey to lead by one on 10-under-par 206 total alongside local duo Irfan Yusoff and Airil Rizman, who carded matching 68s, at the Darulaman Golf and Country Club.

Overnight leader Panuwat Muenlek of Thailand slipped with a 73 to sit in fourth place on 207 with India’s Shubhankar Sharma, who returned with a 67, at the RM200,000 (approximately US$46,600) event.

Catlin, who joined the play-for-pay ranks in 2013, credited his hot putter for putting him in a share of the lead for the very first time on the ADT, which was inaugurated as a gateway to the premier Asian Tour in 2010.

“I found something with my putting and I just let it go from tee to green. Putting was key. I made a big breaker on three from above the hole. I was 202 yards to the hole and I hit a six-iron long of the pin before sinking a 25-footer for birdie,” said the Bangkok-based Catlin, who hails from Gold River, California.

“There’s still a long way to go. I will play it one shot at a time tomorrow,” added the young American, playing in his second year in Asia.

The PGM Darulaman Championship, jointly sanctioned with the Professional Golf of Malaysia (PGM) Tour, is the ninth leg of the 2016 ADT season and also the Tour’s seventh stop in Malaysia this season.

Like all other ADT events, the PGM Darulaman Championship will also offer Official World Golf Ranking (OWGR) points, which will be key for players vying to qualify for the Olympic Games in Rio de Janeiro this August.