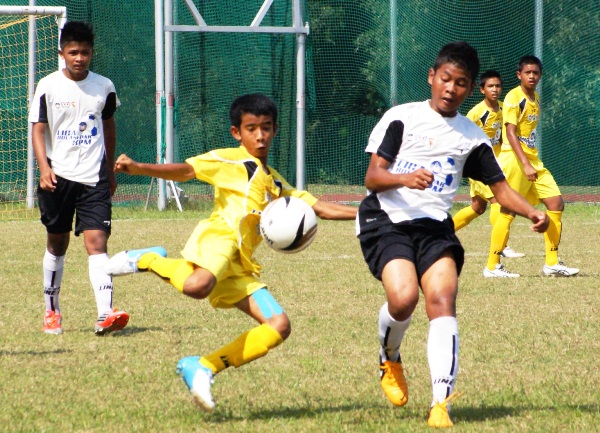 Action from the Ministry of Education Under-17 League.

DEFENDING champions Bukit Nenas of Terengganu need to put their season opening defeat behind them against Tunku Anum of Kedah in the second round of the Ministry of Education Under-17 League 2014 on Saturday.

The east coast did not fare well in their travel to the Malaysian capital last week when they fell 2-0 to the Under-15 side of the Bukit Jalil Sports School.

Noor Azmierul Hakimi Mohd Noor gave the younger Bukit Jalil boys the lead after 34 minute before Muhammad Zahril Azri Zabri then made sure of the full points in the 75th minute.

“It was certainly not a good weekend,” said Zainuddin Mohd Zain, the coach of Bukit Nenas. “But still it was just the opening game of the season. There were lessons to be learned for sure and we have to perform better in the second match.”

Bukit Nenas could not have asked for a harder opponent to overcome than having to face triple champions (2010, 2011 and 2012) SMK Tunku Anum on the road again at the Mini Stadium of the Tunku Anum.

The northerners had a banging start to their season when they thrashed neighbours SMK Syed Hassan of Perlis 3-0, with Mohd Yusri Mohd Farizat scoring a brace in the fifth and 75th minute as Muhammad Adam Akmal Khairol Faizi then added the other deep in injury time.

But the match was marred by two red cards – one each on Tunku Anum’s Mohammad Fairuz Zakaria and Syed Hassan’s Muhammad Nazrul Najmi Mohd. Noor – and also a further five yellow cards.