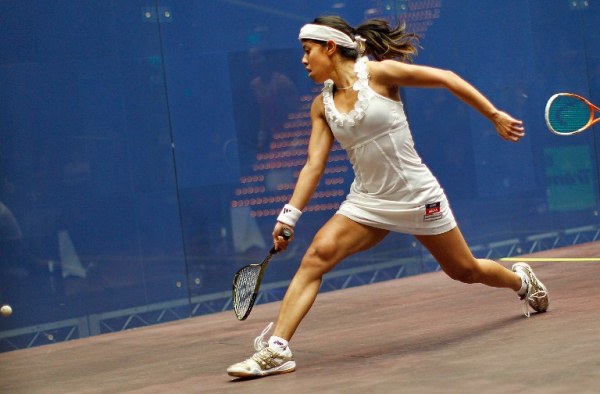 FAVOURITE Nicol David barely broke out of first gear as she cruised into the quarterfinals of the world Women’s Squash Championships after an 11-6, 11-3, 11-4 win over Egyptian qualifier Heba El Torky.

Nicol’s all-action game was just too much for Torky to handle, as the top seed raced to a 7-0 lead in the first game before wrapping things up at 11-6.

The seven-time world champion continued her relentless assault in the second game, forcing the Egyptian into numerous unforced errors to win 11-3 and kept the same tempo to clinch the third game 11-4.

The world No. 1 was well pleased with the victory she racked up in just 24 minutes.

“Having a day off gave me the chance to practise, and I was feeling the ball better and my movement was also fluid. It was a good performance from me today,” said the 30-year-old, who brought a 40-match unbeaten streak into the match.

“I knew it was Heba’s first time in the second round of the World Championships, and if given a chance she would take it. So I was happy to keep it tight and solid throughout the match.”

Nicol will take on Camille Serme in the last eight, and hopes to keep her good record against the Frenchwoman.

“I want to make sure I take this form to the quarters and be focused, but no doubt she will be a tough customer and I am looking forward to the match.”

Nicol also praised her fellow Penangite Low Wee Wern, who joined her in the next round after an 11-8, 11-3, 11-9 win over Canada’s Samantha Cornett.

“It’s great We Wern has also got through in convincing manner. We have two Penangites in the quarters and we’ll definitely be out to put on a good show tomorrow,” she promised.

There were no major upsets on the third day of the championships as England’s second seed Laura Massaro brushed aside compatriot Jenny Duncalf 11-9, 11-6, 11-4 to check into the last eight.