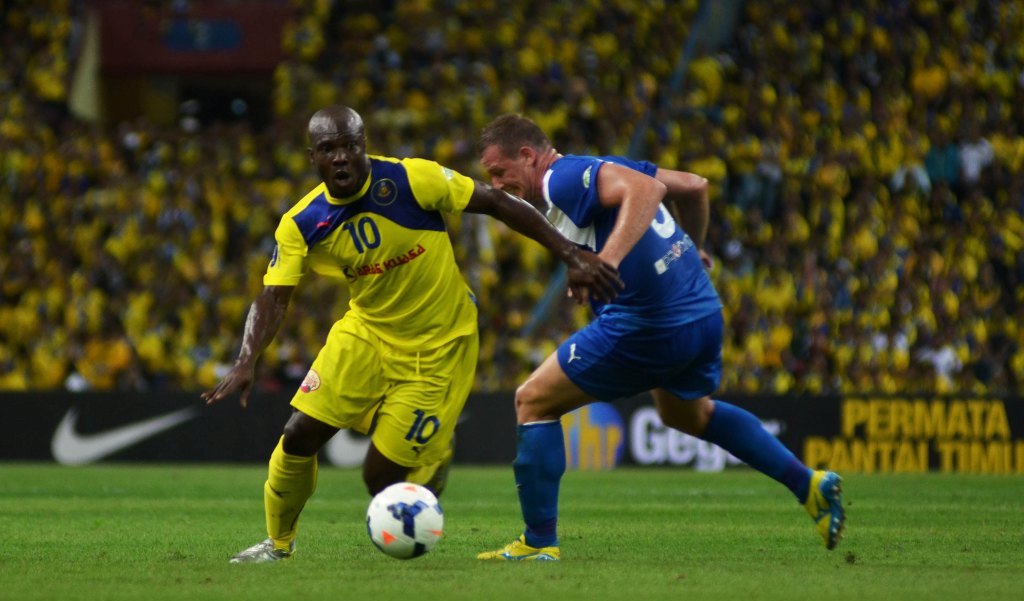 *Damion Stewart and Dickson Nwakaeme to miss semi-final against Kedah

Pahang saw red yet again but the defending champions stayed alive in the Malaysia Cup with a lucky 2-1 win over gritty Police in the return-leg quarter-final match at the Shah Alam Stadium on Saturday to advance to the semi-finasl 3-2 on aggregate. The first-leg in Kuantan ended in a 1-1 draw.

The Elephants will face Premier League outfit Kedah in the semi-finals – a “daunting task” in Zainal’s own words as he will have to do a major reshuffle yet again after Jamaican defender Damion Stewart was red carded in the 84th minute. Stewart, a pillar of strength has left a big gap in the heart of the Pahang defence.

Also out because of suspension is Dickson Nwakaeme. The Nigerian striker picked up his second yellow card in the match against Police on Saturday and will sit out the Kedah match.

“It is trying and testing time for us in the Malaysia Cup. However, I am happy with the way the players have coped up with the odds. They have the will and determination to succeed and these two factors are the main reasons why we are still alive in the Malaysia Cup,” said Zainal, who sweated on the sidelines after Police went ahead 1-0 on the night through Fauzi Majid’s header from a Ali Ashfaq cross to put Police 2-1 ahead on aggregate.

Despite the numerical disadvantage, Pahang once again showed their fighting qualities and three minutes later made it all square with Zesh Rehman sending the Police net dancing with a crisp header from a corner.  With the scored tied 1-1 on the night and 2-2 on aggregate the battle was on for survival.

Zainal made the right decision to bring his supersub Fauzi Roslan to add more bite in attack. And Fauzi did not let the Elephants down with a stunning winner in injury time when he blasted stinging shot that hit the back of the Police net to shatter the Premier League champions brilliant run in the Malaysia Cup.

“Kedah will be another tough hurdle for us. They too have the quality players who never let the odds stand in their way. Pahang will be without Stewart and Dickson but we will welcome back (Matias) Conti for the semis…you lose some and you win some. I don’t see any plus points for us, either playing at home or away.

“Fauzi has never let the team down and he did it again. He started on the bench and he delivered when it mattered. He is one player who has shown his commitment and discipline, not matter whether he starts the bench or starts from the bench,” added Zainal, who led Pahang to the FA Cup this year.