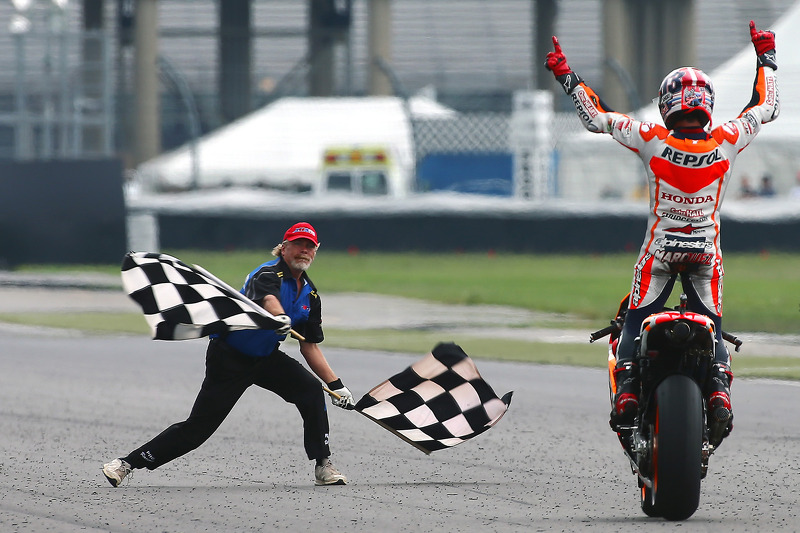 “Two years in MotoGP, two titles. It’s incredible,” Marquez told reporters. “I couldn’t have imagined it. Maybe to people it looked easy because I am always smiling and always happy, but also I feel pressure.”

Fellow Spaniard Jorge Lorenzo won at Motegi as he had last year, finishing in 42min 21.259sec to back up his victory at Aragon two weeks ago with Marquez behind him on his Honda and Italy’s Valentino Rossi third for Yamaha.

Marquez’s second place meant he can no longer be caught by Rossi or Honda teammate Dani Pedrosa with three races remaining this season.

Marquez won 10 straight races this season from the curtain-raiser in Qatar before the streak ended in the Czech Republic in August, but he quickly returned to the top of the podium two weeks later at the British GP.

The Japanese race took place in cloudy conditions but escaped rain, despite fears an approaching typhoon could cause disruption similar to last weekend’s Japanese Formula One race, which ended prematurely after a horror crash involving France’s Jules Bianchi on a rain-sodden Suzuka circuit. – Agence France-Presse

Hafizh Syahrin Abdullah wrapped up the Japanese Grand Prix with a huge smile as he secured an eighth place finish in the Moto2 race, his third top-10 placement since he entered  the world championship this season.

The PETRONAS Raceline Malaysia overcame his back ache to improve his start position (17th) by 10 spots, completing the 23 lap race  at the Twin Ring Motegi Circuit in 43’07.728s, bringing his championship points haul to 42 points in 18th place.

Meanwhile the contest was won by Thomas Luthi (Interwetten Sitag) in 42’50.219s, with the Swiss rider joined on the podium by Maverick Viñales (Paginas Amarillas HP 40) and Tito Rabat (Marc VDS Racing Team) with 42’51.428s and 42’53.850s respectively.

“I am so relieved when I saw the chequered flag on the last lap. My back was in so much pain at the start and I felt like giving up after 6 laps. But having posted quick lap times here,I did not want to give up too easy without fighting back. I kept going and the pain seems to ease off a little and there and then I knew I could ride well to catch some riders in front of me. All my fast laps were done after after the Lap 10. My bike was performing beutifully and I could pass rider after rider. Along the way, I also recorded the 4th fastest rider of the day. A great day for me and the team,” said Hafizh.

Meanwhile PETRONAS Raceline Malaysia manager, Barry Leong commented, “Another 8 points in the bag and another excellent show from Hafizh. Not only he rode so well but he did it while carrying an injury. We are extremely happy for him as he has now reached the high level of racing and almost on par with this season’s top riders. With just three more races left for the season, we hope he can maintain such level and finish the championship with a high note.”