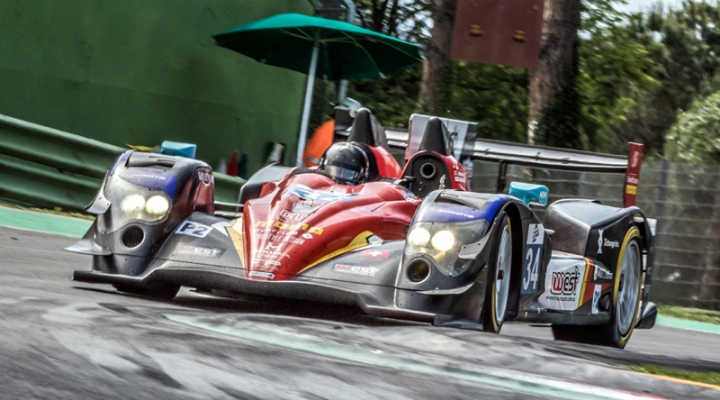 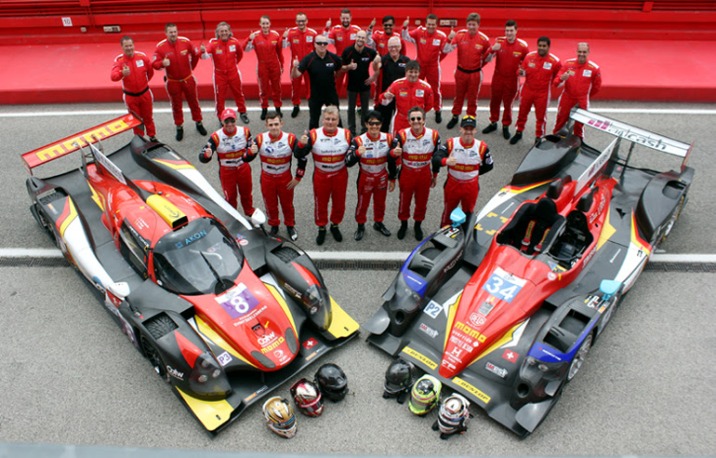 From the beginning the 4-hour-race at Imola, second heat of this years ELMS championship, was mainly seen as a preparation for the highlight of the season, the 24 hours of Le Mans, by Swiss team Race Performance. Nevertheless the team had hoped for a slightly better outcome than P9 in LMP2 and P14 in LMP3.

But just when both cars where on there way to make up for lost ground, the weather did not cooperate: Heavy rain set in, so race control decided to run the last our first under Full-Course-Yellow, then even behind the Safety Car. A decision by far not all drivers agreed with, feeling to be robbed of their chances of further improvement.

James Winslow this time did the start – and then even a double stint: “During the first stint it was quite difficult managing the traffic,” said the Brit. “Then, during the second stint, the car got better and better, we were second or third fastest car on track at that time. It would have been nice to have had this speed from the beginning of the weekend, but it only came during the race. For Shinji Nakano it was then a bit weird that he had to go slow for a full hour under FCY and behind the SC due to the heavy rain and not being able to improve our position. Ninth place is slightly disappointig,as in the race we had the pace to be fifth. But nevertheless I am already looking forward to Le Mans.“

Joining the car number 34 line-up was Shinji Nakano. The 45-year-old Japanese from Osaka was racing in Formula 1 for Prost and Minardi in Formula 1, scoring two points in his year wit Prost. From 2000 onwards he focused more on the US racing scene, starting mainly in the Champcar Series. Since 2005 he turned to sportscar racing, looking back to three Le Mans finishes in eight starts: “So this will be my ninth time at Le Mans and I am really glad to be able to do it  with such a reliable team as Race Performance. Niki Leutwiler has already been my team mate last year during the  Asian Le Mans Series.

He has got a very stable and  consistent driving style, which will be a great asset to the team at the upcoming Le Mans 24 hours. With Jamie I am driving here at Imola for the first time and I am really looking forward to getting to know his driving style. There will be fierce competition in LMP2 as usual, but I am excited to work with the team to achieve an excellent result overall.”

James Winslow already sat in the Race Performance car at the ELMS race at Silverstone and is looking forward to the upcoming events, especially Le Mans: “I can´t wait to do the 24 hours of Le Mans this year with Race Performance. To be successful in this great race, you need a great team. And this is exactly what we have at Race Performance: a fantastic  team, fantastic people. We all work very, very hard to reach a podium at Le Mans.”

Niki Leutwiler then took over from his teammate: “James did a very good job during his two stints, then I got into the car. It started quite well for me, for the first time this weekend I found a really good rhythm,” said  the Swiss, who  experienced a really scary moment on track.

“On the straight I was pushed by this white GT-Ferari, who forced me into a high speed 180 degree spin. Quite a harsh experience, nothing you need at all. Fortunately I did not hit anything and was able to continue immediately, but of course the tyres were ruined. I still tried to continue with this set until the rain started, which I managed to do, but I could not attack as aggressively as before.

“When the rain turned really heavy and I wanted to come in to hand the car over to Shinji, I got aqua planing and spun again, but luckily I was able to catch the car again and still come into the pits, so it did not make much of a difference and we could keep our position in this crazy race. It was a mixed weekend for us, but as a whole team we learned a lot again,” he stated.

In general the team had been slightly disadvantaged at Imola on the technical side: “We had some difficulties to come up to speed. One reason is that there are quite a few newer and more modern cars in the field. The Judd engine did not help here either, it has not got enough torque to fight the Nissan.“

Ex-Formula 1 driver Shinji Nakano did not have much chance to prove his ability in his first race for Race Performance in the ELMS: “Unfortunately we had the bad weather in the end, so I could not do much,” said the annoyed Japanese. “The car got much better during the race compared to qualifying, so we could have ended up quite a bit further up, but the rain prevented that. Anyway I learned quite a lot in this race, especially for Le Mans, a race I am already looking forward to. Thanks to the team and to my teammates, in general it was a good weekend nevertheless.“

Belgian Bert Longin managed to bring the car up to 12th in  class after qualifying had not gone very well, but then Marcello Marateotto went off, ending up in the gravel, which cost a lot of time. Additionally, a change in strategy did not pay off at all.

“Unfortunately Imola did not go well for us,” said the Italy-Swiss with some disappointment: “We did a tactical mistake in having me do a double stint. Doing three hours on the same set of tyres was too much, we had too much degradation which led to spins and to losing laps. So we ended up where we are.“

But he does not give up in any way: “Forget it, learn from it – and do better next time.”

He is already looking to the future.

Youngster Giorgio Maggi faced the same fate as Nakano in LMP2. Being the last driver to get into the car, the only thing he experienced was rain and the safety-car-period.

“First practise was quite okay, the second as well, we got closer to the front end of the field. With qualifying I was not really happy, the car was good, but I did not leave a big anough gap to the car in front, so I could push only for one lap. About the race I can’t say much – it was actually not really a race for me.“

Race Performance team manager Michel Frey resumed: “It was a difficult weekend for both cars. In LMP3 during free practise we were definitely closer to the midfield, qualifying was about as expected, in the race we then where closer again. Bert did a good stint, Marcello also started with good laptimes, but unfortunately he then went off once or twice. Also the team together with the drivers went for a strategy change which in hindsight was the wrong decision.“

Also in LMP2 not everything went according to plan. “Practise was still a bit disappointing, in qualifying we more or less managed to set our planned times. But we had to realise that there was still quite a gap to the top, here at Imola probably due to our technical limitations.

“During the race we saw very competitive stints by Winslow and Leutwiler. We had hoped to make up some ground under mixed conditions with Shinji Nakano, but unfortunately race controll decided to run the full last hour of the race under Safety Car, taking away any chances we might have had.“

But even as he considers the result as “not what he had hoped for, at least we know what we have to work on for La Mans. And this was what this race was meant to be in first place: preparation work for the 24 hours.“