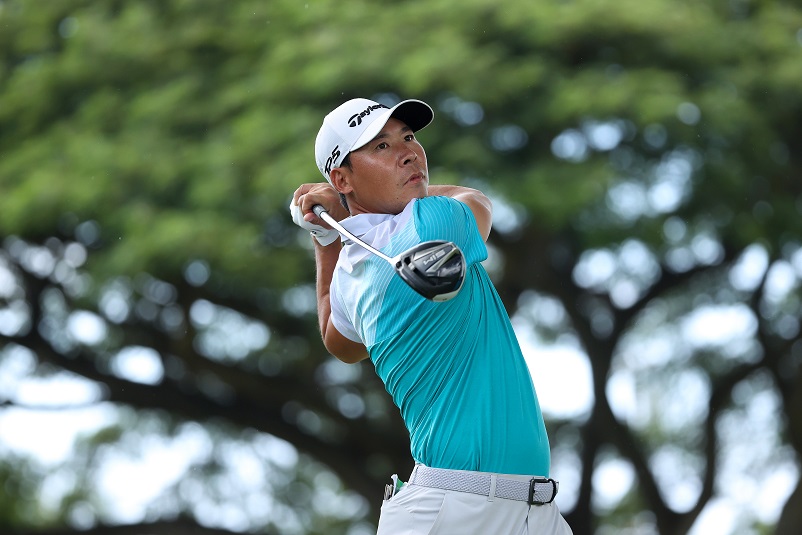 China’s Xinjun Zhang showed a welcome return to form by firing two eagles in a second round of 4-under 68 which propelled him to tied 15th place at the Memorial Tournament presented by Nationwide on Friday.

Starting his round from the 10th hole, the 33-year-old Zhang brilliantly sank a seven iron approach from 194 yards on the par-4 17th hole at Muirfield Village and then found the bottom of the cup with his third shot from the greenside bunker on the par-5 7th hole for his second eagle of the day.

The Chinese star made four other birdies against just as many bogeys to put himself in position for back-to-back top-10s in the PGA TOUR tournament hosted by Jack Nicklaus following his T10 last season.

Zhang’s two-day total of 3-under 141 sees him trailing second round clubhouse leader Patrick Cantlay by five strokes. Cantlay, a three-time TOUR winner, fired a 67 for an 8-under 136 total to put himself in prime spot to win the Memorial Tournament for a second time in three years.  Defending champion Jon Rahm was also at 8-under through 13 holes of his round when play was suspended due to fading light.

After opening with a 73, Masters Tournament champion Hideki Matsuyama, who was the Memorial winner in 2014, moved up to T8 after negotiating 14 holes of his round in 5-under.

Currently ranked 165th on the FedExCup ranking, Zhang snapped a frustrating streak of nine successive missed cuts at last week’s Charles Schwab Challenge where he finished tied 73rd. He was relieved his recent hard work was finally rewarded on Friday.

“It’s not just the score. It’s been such a long time since I’ve played like this where my tee shots and iron play were solid and I kept a good mindset. Although I made some mistakes on a few holes, I was able to save them and minimize the damage,” said Zhang, who finished 78th on the FedExCup ranking last season.

He missed eight greens in regulation but scrambled beautifully where he currently ranks fifth for Strokes Gained: Around the Green. The day’s highlights were the two contrasting eagles which put a big smile on his face after the round.

“The rough is quite thick, so you need to be very accurate with your tee shots, and you can’t rush when you make a mistake. I did a very good job in all aspects,” Zhang said.

“On 17, I had 194 yards left and hit a very nice shot with a 7 iron that bounced on the green and went in. I think the hard work I’ve been doing for a while now has not been wasted and I’m slowly getting back into shape. My irons, tee shots and other aspects are better than before. For the weekend, I need to stay as positive as I was today and deal with mistakes rationally. I played very well, and I hope to carry on over the final two days.”

Korea’s Sung Kang added a 72, which featured four birdies, two bogeys and one double bogey, to his opening 70 for T21 while Chinese Taipei’s C.T. Pan will enter the weekend in T43 after as second round 70.