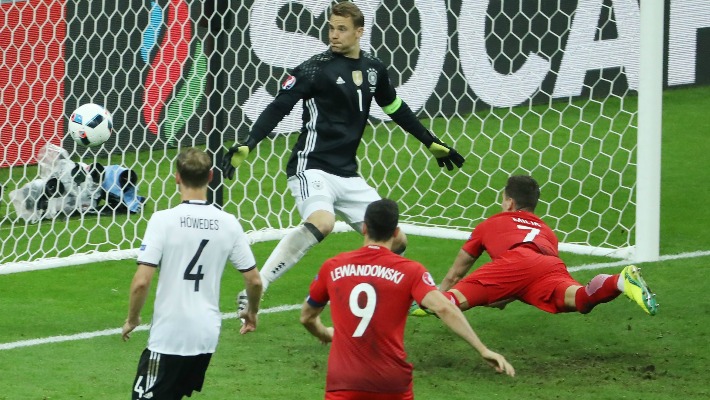 Germany coach Joachim Loew insists the shock results and fine performances from Euro 2016 minnows is no surprise as they are playing the “tournament of their lives.”

The world champions were left licking their wounds as they were held 0-0 by Poland on Thursday.

An expanded 24-team format has allowed a host of new nations a chance to shine with Poland, Wales, Slovakia and Northern Ireland all winning their first ever games at a European Championship. Debutants Iceland meanwhile held Cristiano Ronaldo’s Portugal 1-1.

“The results are very close because for the teams that participate for the first time it is the tournament of their lives,” said Loew.

“They do what they are good at, they defend and wait for chances on the counter-attack and that is what we expected before the tournament, that the teams will fight for everything.”

Even when the favourites have emerged victorious of the first week of the month-long tournament in France, it is has often been thanks to late strikes.

Hosts France have won both their matches in the final minutes, holders Spain needed an 87th minute winner to see of the Czech Republic, whilst England struck in stoppage time to beat Wales.

– Giants waiting to step in –

“The results are quite close, many goals are conceded at the end of the games,” added Loew.

“We’ve seen France and England win games in the last minute. I expected to see fights like that because teams defend with 10 men and wait for their chance.”

Germany remain on course to reach the last 16 as they top Group C on goal difference from Poland with four points from their opening two games.

And Loew does not believe the trend will continue into the knockout stage as he fancies the traditional giants of European football to come good.

“France are the favourites, the Italians had a great opening game, Spain and ourselves are always sides that can win a tournament.

“From the knockout games on you cannot have a bad day, you cannot allow any mistakes, so it is too early to predict who will get to the final.”

Defences were firmly on top at the Stade de France on an emotional return for Loew’s men, just seven months after they were caught up in a night of terror in the French capital when 130 people were killed in a string of terror attacks.

Germany defender Jerome Boateng caused a stir before the tournament when he announced his wife and five-year-old twins wouldn’t travel to watch him as he believed “the risk simply too big.”

However, that hasn’t affected Boateng’s form as he won man-of-the-match for a flawless display.

“Most of all I am satisfied with the defence,” said Loew, who recalled Mats Hummels alongside Boateng after a month out with injury.

“We didn’t concede too many counter-attacks which the Polish are normally strong at.

“They had one big chance after half-time, but apart from that (Manuel) Neuer didn’t have a save to make.