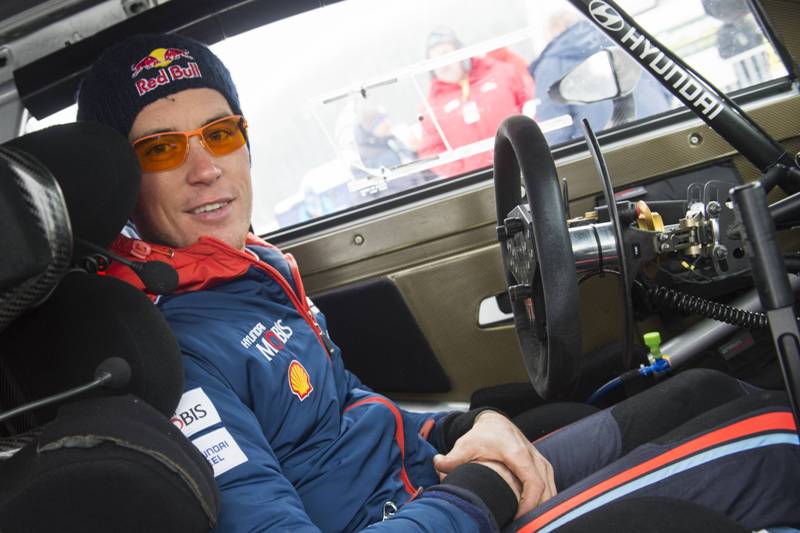 Ice-cool Thierry Neuville kept calm in the heat of a furious fight to win Rally Sweden on Sunday afternoon and take the lead of the FIA World Rally Championship.

The Belgian became only the third non-Nordic driver to win the calendar’s solitary pure winter rally and end an agonising 12-month wait after crashing out of a comfortable lead last year.

He overcame an electrical glitch with his Hyundai’s paddle shift gearchange system, a lurid spin into a snow bank and extreme pressure from the chasing pack to win the four-day encounter on snow and ice-covered forest roads by 19.8sec.

“It’s an incredible weekend. We didn’t expect to be so fast over here this year, but the team and the car gave us the chance to fight for victory. We deserved it last year, even more this year,” said Neuville.

He finally broke clear of his pursuers on Saturday afternoon and eased through Sunday’s final three speed tests to head Ireland’s Craig Breen, driving a Citroën C3, for whom second was a career-best result.

Breen climbed to second on Saturday morning when Andreas Mikkelsen spun at exactly the same point as Neuville. He kept his composure to hold off the Norwegian, team-mate to the rally winner, by 8.5sec.

Esapekka Lappi hounded Neuville early on until he plunged down the order after burying his Toyota Yaris in a snow bank. He fought back and gained two places in the final three stages to finish fourth, 17.5sec adrift of Mikkelsen.

A final stage mistake from Hayden Paddon made life easier for Lappi. The Kiwi stalled his i20 a couple of kilometres from the finish and trailed the Finn by 8.6sec.

After only a day’s pre-event testing, Mads Østberg was sixth on his debut drive in a C3. The Norwegian ran as high as second but he slid down the order as unfamiliarity with the car and a lack of confidence in its set-up cost time.

Jari-Matti Latvala, who delivered Toyota Gazoo Racing a fairytale win last season on only the Japanese manufacturer’s second rally back at the top level after a 17-year absence, was seventh after being delayed by a troublesome front differential and adverse road conditions.

Fellow Finn Teemu Suninen was seventh in a Ford Fiesta and the leading M-Sport World Rally Team driver after the squad, which headed the manufacturers’ standings after last month’s Rallye Monte-Carlo, endured a nightmare weekend.

Ott Tänak and Monte-Carlo winner Sébastien Ogier dropped big chunks of time in Friday’s opening leg as they ploughed a path through deep snow. They were unable to regain lost ground, finishing ninth and 11th.

The championship journeys to Mexico next month for 2018’s first taste of gravel roads. Rally Guanajuato Mexico is based in León from March 8-11.

FIA World Rally Championship (after round 2 of 13):