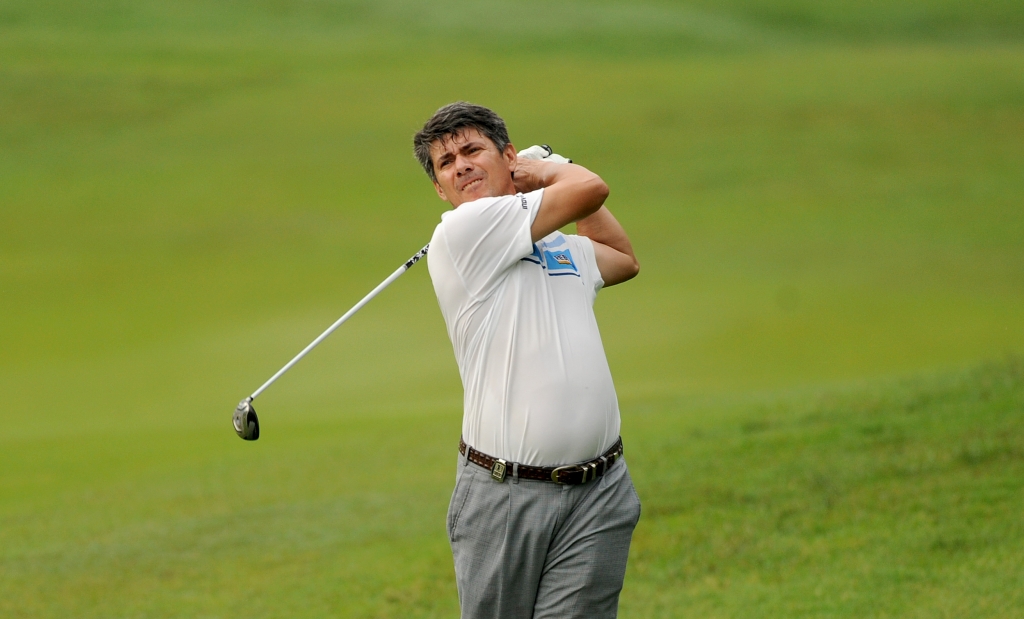 Brazil’s Adilson Da Silva produced a blistering six-under-par 66 to soar into the halfway lead at the Asian Tour’s US$650,000 Mercuries Taiwan Masters on Friday.

Da Silva battled through gusty winds, which packed speeds up to 52mph, for the day’s best round and a two-day total of three-under-par 141 to move one shot ahead of England’s Steve Lewton, who carded a 72, at Taiwan Golf and Country Club’s Tamsui course.

Asian Tour rookie Paul Peterson of the United States moved to third following a 71 while seven players including in-form Filipino veteran Antonio Lascuna (69), Australian Marcus Both (73) and Thailand’s Prom Meesawat (73), shared fourth on 144s at the long-running Mercuries Taiwan Masters, which is celebrating its 28th edition this week.

Overnight leader Lionel Weber of France failed to emulate his opening round magic as he stumbled to an 80 to merely make the halfway cut while defending champion Scott Hend of Australia, who also returned with an 80, failed to make it into the weekend rounds.

Da Silva, a multiple winner in South Africa but seeking a first on the Asian Tour, capped a flawless front nine highlighted by three birdies and one eagle before dropping a shot on the 13th hole. He recovered by adding two more birdies on his way home.

The Brazilian credited a hot putter and his caddie’s local knowledge for his stunning effort. “My putting was so good. The greens were running better this morning. The wind was getting in and out on the course and it was hard to gauge the direction sometimes. I was really staying positive on the front nine and it kind of got my game going,” said Da Silva, who improved by nine shots from his first day’s 75.

“My caddie helped me quite a bit with the lines. We were reading the lines together and we got it right most of the time. You have to keep the ball in play from the first hole. I think putting is the key here and you’ve got to be aggressive on these greens,” added the 42-year-old Brazilian.

Lewton, who has two top-10s this season, is relishing the prospects of contending for a first Asian Tour victory. “I made a few mistakes on the last few holes but I thought I played pretty steady in the wind. It’s definitely more difficult today. I was just trying to make as many pars as possible because it’s really hard to score.

“I will keep to the same mindset and game plan for the next two rounds. I will just keep doing what I’ve been doing, continue to grind out there and we will see how it goes,” said the 31-year-old Englishman, who fired two birdies against as many bogeys.

Qualifying School graduate Peterson believes he can rise to the occasion but acknowledged that patience will be the key this weekend. “I stayed very patient out there. I kept everything organised and not let anything get to me. I will continue to stay patient in the next two rounds and if I can improve by one shot a day, I should be in a good chance for a win on Sunday,” said the 26-year-old, who is currently 30th on the Order of Merit with three top-five finishes.

Meanwhile Lascuna surprised even himself after capping a good round today. “I’m really happy with how I played, given the tough conditions out there. When I got to two-under-par, I was still thinking how I did that! It’s strange that I actually played well today,” smiled Lascuna.

“It’s a very challenging course. You need to stay focused as you don’t know what is going to happen. You need to keep thinking on this course. I stuck to my game plan and I’m glad it worked out. You can’t afford to miss any shots on this course too,” added the 43-year-old Filipino, who mixed his card with four birdies and one bogey.

Scores after round 2 of the Mercuries Taiwan Masters 2014 being played at the par 72, 6,923 Yards Tamsui Course course (a- denotes amateur):