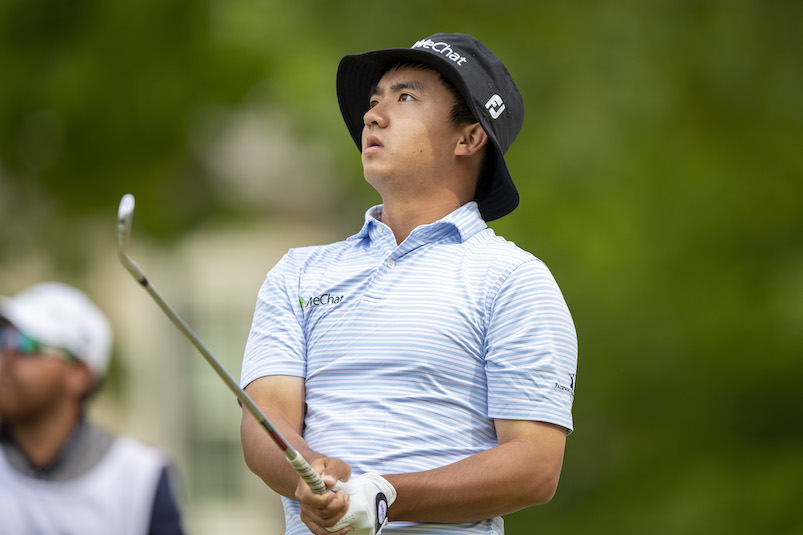 China’s Marty Zecheng Dou was kicking himself after letting slip the chance of winning a third Korn Ferry Tour title at the Bahamas Great Abaco Classic at The Abaco Club on Wednesday.

The 25-year-old Dou, who was the third round leader, led by two strokes with three holes remaining in regulation play but made costly bogeys on the 16th and 18th holes which allowed Brandon Harkins to tie him and force a playoff.

Both players traded pars in the first playoff hole before Harkins went on to lift his first Korn Ferry Tour victory with a par in the second extra hole after Dou found the penalty area twice to conclude a disappointing final day in the Bahamas.

“When you get to the point (of winning), two strokes lead with three to play, I’m thinking of just making pars to win it. Losing is a little different definitely. We are talking about going after a win, we’ve already got one hand on the trophy. It’s pretty tough,” said a disappointed Dou, who closed with a 3-under 69 and 18-under 270 total.

The young Chinese talent appeared to be cruising towards the finish line after navigating 15 holes in 5-under. However, he surprisingly stumbled down the stretch in the wind. He hooked a drive into the penalty area on the 16th for his first bogey of the day and then sent a wayward fairway wood approach into the penalty area on the closing hole, a par-5, for another costly dropped shot to squander his chance.

“I was struggling into the wind. A big snap-hook on 16 and then a big slice on 18. When it gets into that (wind), it’s just my golf game. It’s nothing with my mental, it’s nothing with anything else. I’ve got to work at it,” said Dou, who posted his second top-3 finish at The Bahamas Great Abaco Classic at The Abaco Club.

“It’s just one tournament, it’s nothing big. That makes me feel it’s fine as this is only the second week of the year. I’ve feel I’ve got a lot of time after that. I mean I gave it a go, I gave it a good run. Brandon played really good and it was fun playing with him in the last group. A lot of tension and a lot fireworks too.”

The 2022 Korn Ferry Tour season continues next Thursday, February 3 with the opening round of the Panama Championship.