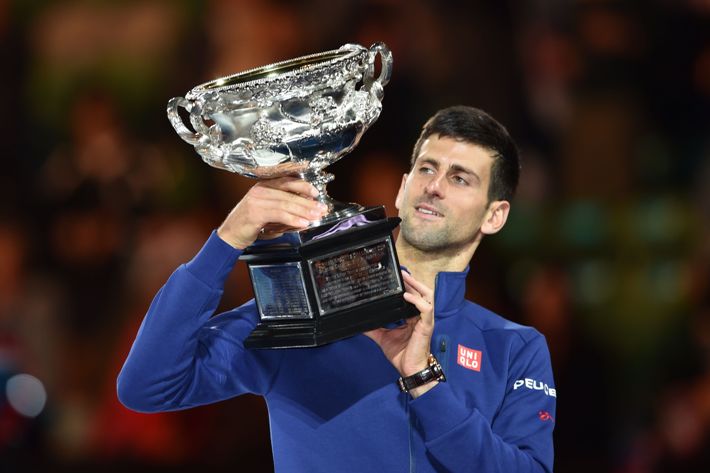 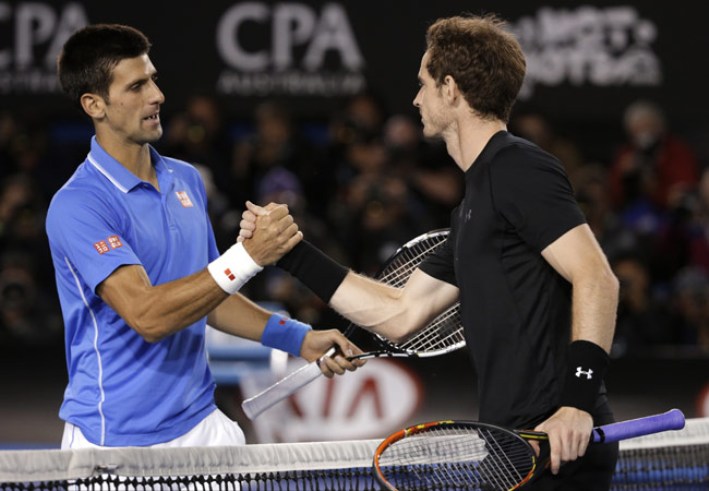 World number one Novak Djokovic hammered a misfiring Andy Murray in straight sets to win a record-equalling sixth Australian Open title and strengthen his grip on men’s tennis on Sunday.

Djokovic equalled the tally of Australia’s Roy Emerson, who won the tournament six times between 1961 and 1967, an achievement that had gone unmatched in the 49 years since.

It was also Djokovic’s 11th Grand Slam title, putting him in equal fifth place on the all-time list alongside Rod Laver and Bjorn Borg, behind leader Roger Federer’s 17.

“It’s an incredible feeling, especially because of the fact that I managed to make history tonight and equal Roy Emerson’s record of six Australian Opens,” Djokovic said.

“This trophy is even more unique for me tonight and when you have an opportunity to make history it adds to the motivation and incentive before you come out on the court.”

Djokovic underlined his status as the dominant force in Melbourne, after downing Jo-Wilfried Tsonga to win his first major title in 2008 and beating Rafael Nadal in an epic final in 2012, along with his four wins over Murray in 2011, 2013, 2015 and now 2016.

Djokovic also extended his Grand Slam winning streak to 21 matches. He has not lost a match at the majors since he was defeated by Stan Wawrinka in last year’s French Open final at Roland Garros.

While Djokovic was further enhancing his reputation, Murray has the unwanted statistic of becoming only the second man in the post-1968 Open era to lose five Grand Slam finals at any one major.

Murray had tears in his eyes at the presentation when he thanked his pregnant wife Kim Sears, who is due to give birth to their first child in the coming weeks.

“You’ve been a legend for the last two weeks. Thank you so much for all of your support and I’ll be on the next plane home,” he said in a faltering voice.

Djokovic won 24 more points than Murray, 123-99, in the final, while Murray made a total of 65 unforced errors — including 28 off his forehand and 29 off his backhand.

Djokovic faced a break point in his opening service game but then went on a blazing run, breaking Murray’s serve twice to claim the opening set in 30 minutes.

Murray survived four break points to hold serve in a marathon 12-minute third game as he tried to stay in the second set against the pressing Serb.

But Djokovic gained another psychological breakthrough with a service break in the seventh game after Murray overhit a forehand to trail 4-3.

Fighting Murray broke back in the following game with his backhand clipping the baseline, which was confirmed by Djokovic’s challenge.

Murray fought off two break points in a fiercely contested ninth game in a war of the attrition between the two long-time rivals, who have known each other since their junior days.

But Djokovic fought back from 0-40 down to break Murray’s serve for a fourth time, in a game featuring one exhausting 36-shot rally, to lead 6-5 and serve for the second set.

The Serb claimed a two sets to love lead after winning an 80-minute battle for the second set, leaving Murray with it all to do.

Djokovic tightened the noose with another service break in the first game of the final set, with Murray’s task looking herculean to take the final to five sets.

Murray broke back in the sixth game but in the tiebreaker the Scot served two double-faults as Djokovic steamed to five match points, and belted an ace on the third match point to seal the championship.

It was yet another big statement from the peerless Serb against a major rival, after he swamped Rafael Nadal 6-1, 6-2 at Doha and convincingly beat Federer in the Melbourne semi-finals. – Agence France-Presse