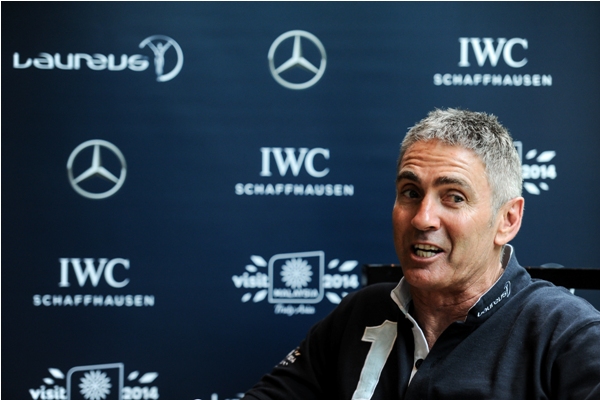 ADVERSITY and success pretty much sums up the career of Mick Doohan. The Australian has pushed the boundaries of the human body on numerous occasions, overcoming two major injuries to win five consecutive 500cc World motorcycle Grand Prix Championships and earn the right as legend of the sport.

Nicolas Anil of Sports247.My had the privilege to sit down tete-a-tete with the Laureus Sports Awards ambassador during the nomination of the event and delve a little into his life, post-racing.

Sports247: What have you been up to after life on the fast lane?
Doohan: After I stopped racing, I have been involved in some businesses in Australia.  But being part of Laureus has been the highlight for me because it is held annually and I get to be involved in their many projects. I think it’s fantastic that this year it’s being held in Malaysia on March 26.

S247: Would you consider yourself a little bit like Evel Knievel, having recovered from serious injuries to reign at the top?
Doohan: (Laughs)… Yea, I don’t think I was crazy as Evel Knievel, maybe just a little bit below him. But motor racing is certainly dangerous, and I was fortunate enough to excel at my chosen sport. But the downside, I guess for myself was that I did have a few bad accidents and broke a few bones. But this is part of life. I don’t sit and dwell on it, and I am certainly not a stuntman! 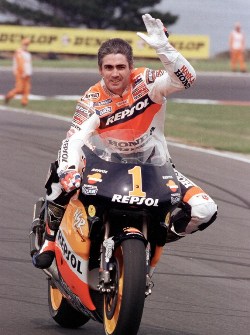 Mick Doohan at the Australian GP in 1999/AFP pic.

S247: How has motorbike racing evolved from your heydays compared to now?
Doohan: Well, in some countries it’s bigger and in some it’s smaller. I think I was on the cusp of the golden star generation to the modern day racing. Perhaps the only major difference is the evolution of the machinery, but the format and professionalism is essentially the same.

S247: You won five consecutive titles. Which one was the most significant?
Doohan: The first one’s always good to get the monkey of your back, and the second one too to prove that the first was no fluke. To be honest, everything after that was just the cherry on the cake because for me it was easier to win than it was to lose. When I was out there, I wanted to do the best I could, so every title brought equal joy to me. Winning my fifth title in Australia which ultimately clinched me the Grand Prix was pretty special too.

S247: Do you forsee an Asian champion in motorcycle racing sometime soon?
Doohan: It’s all starting to happen actually, in Moto 2 and Moto 3. You even have a Malaysian rider (Zulfahmi Khairuddin), so it’s all about the support now. It reminds me of Japan 25 years ago, when they used to compete in the smaller categories and make their way up from there. I think it’ll be not too long before we see a Malaysian in the Moto GP 500cc class, and I am looking forward to that day!

S247: Your pick to win the Laureus Male Best Athlete award?
Doohan: (Laughs)… I’ve been asked this question a few times, but to be honest, I really can’t pick one. It’s a very tough field, as it always is, and everyone has their own personal favourite. I guess you’ll just have to be there on March 26 to find out who wins!