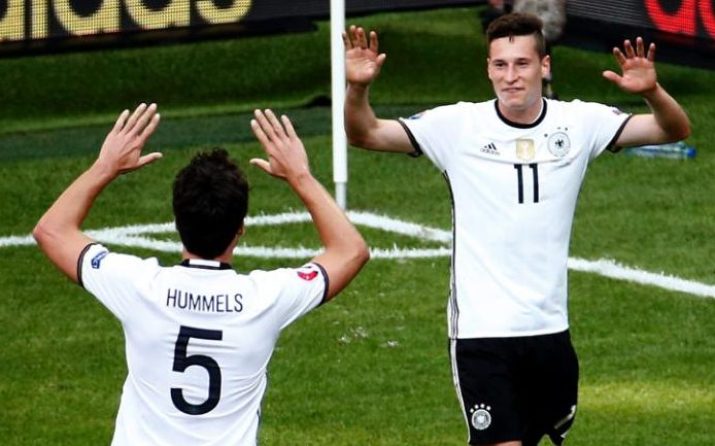 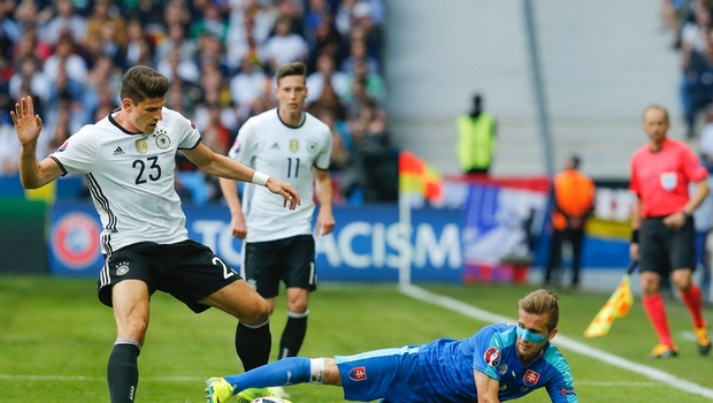 Germany coach Joachim Loew appears to have found the right formula to get his attack firing at Euro 2016 after Julian Draxler’s outstanding contribution in Sunday’s 3-0 win over Slovakia.

The 22-year-old Wolfsburg attacking midfielder was the man of the match as Germany produced arguably their slickest performances since winning the 2014 World Cup to clinch a place in the European Championship quarter-finals.

After Jerome Boateng’s early opener, Mesut Ozil had a 13th-minute penalty saved before Draxler intervened with an assist and a goal to set the world champions up for a last-eight date with Italy or Spain.

Playing on the left wing, Draxler combined superbly with Jonas Hector before cutting the ball back for Mario Gomez to double Germany’s lead just before half-time.

And the former Schalke prodigy then volleyed home on his right foot from close range following a corner just after the hour mark, securing a comfortable win on a sunny evening in northern France.

Draxler had started Germany’s opening two games before being left on the bench in the 1-0 win against Northern Ireland last Tuesday but he was recalled at the expense of Mario Goetze on Sunday and his performance justified Loew’s selection.

“It wasn’t easy in the last game because I didn’t play but today I was happy to play and help the team,” said Draxler.

“We have a lot of quality in our side so it doesn’t matter if I don’t play. I just work hard in training so the manager can count on me if needed.”

Draxler, who said he found out he would be starting the game when he spoke to Loew just after breakfast at the team’s hotel, admitted getting into one-on-one situations with the Slovakian defence had been a key part of the German plan.

“The coach asked me to do that. He gave me a lot of self-confidence. He trusts in my quality and wanted me to search for the one-on-ones,” said Draxler, who gave Slovakia’s Bundesliga-based right-back Peter Pekarik a torrid time at the Stade Pierre-Mauroy.

A player with “two magic feet” according to Gomez, Draxler’s performance summed up why Manchester United have been linked with a £30 million (36.5 million euros, $40.5 million) bid to sign him just a year after he joined Wolfsburg.

It may, however, take far more than that for Wolfsburg to part with a player who is not 23 until September and has four years left on his contract, especially after his display on Sunday.

Draxler’s goal was just his second for his country on his 22nd appearance, with his only other strike coming in a friendly defeat to the United States in June 2013.

But his game is more about making chances for others, and Gomez’s latest goal-scoring display to follow his winner against Northern Ireland was another source of satisfaction for Loew.

After unsuccessfully using Goetze, the scorer of the winner in the World Cup final against Argentina, as a false nine in the 2-0 victory against Ukraine and the goalless draw with Poland, Gomez has come in and scored in successive games.

And after labouring to convert their chances against Northern Ireland, Germany had a greater cutting edge against Slovakia with Draxler, Thomas Mueller and Ozil supporting Gomez, while Goetze was left on the bench.

Asked if Sunday’s win was the end of his false nine experiment, Loew replied: “For us, the problem is not having a real or a false nine. If nobody runs in behind the defence we won’t do anything.

“Against Northern Ireland we did better in that regard than against Poland. Whether it’s Goetze, Mueller or the others, they got in behind every time. Today it was the case as well.

“When we got the ball into the box we always had three or four players there. That wasn’t the case against Poland.”

With their defence keeping a fourth straight clean sheet and an attack clicking into gear at the right time, Germany are going to take some beating. – Agence France-Presse