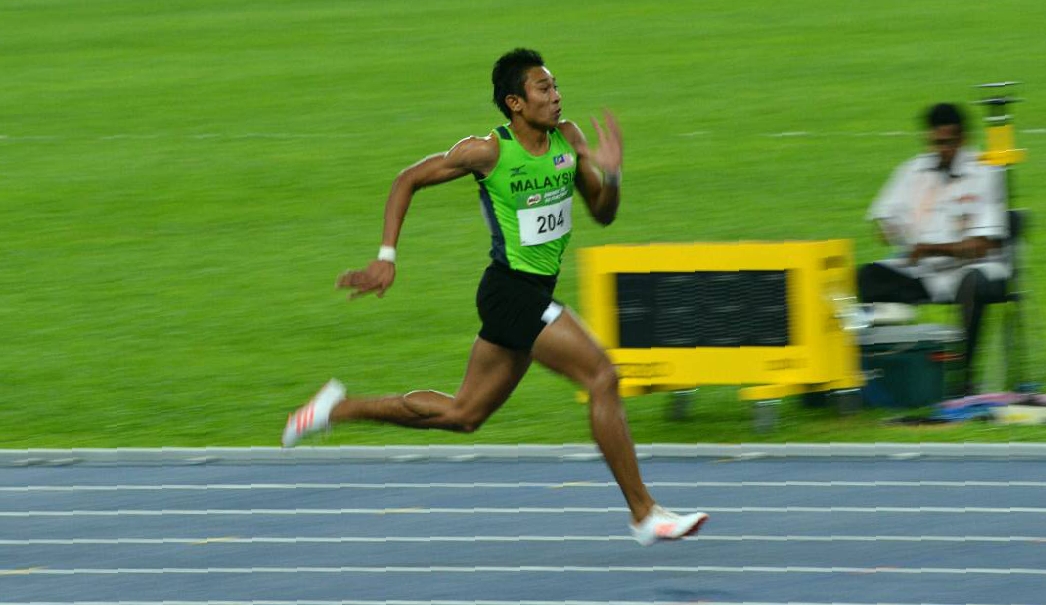 He broke down in tears – tears of joy – and hugged his coach Mohd Poad Kassim – after a blazing run at the National Stadium in Bukit Jalil which brought him a new record of 20.90 seconds in the men’s 200m.

It broke Tan Sri Mani Jegathesan’s long standing record of 20.92s set at the 1968 Mexico Olympics. Jegathesan achieved the feat in the semi-finals.

In the process Melaka-born Khairul – who will turn 19 this Saturday – earned himself an early double birthday. His new time is also a new Malaysian Open meet record, erasing the time of 20.94 held by Japan’s Kento Terada set in Kangar in 1996.

And there was triple celebration for Malaysia in the 200m when the hosts made a clean sweep. The 1-2-3 finish saw Sarawakian Jonathan Nyepa taking the silver with a time of 21.29 while Perak-born G. Aravinn Thevarr settled for the bronze when he clocked 21.31.

Khairul was impressive at the Bukit Jalil Stadium but a new national record was rather impossible after he clocked 21.08 in the heats. His previous personal best was 21.01.

The new national record made up for the disappointment of being disqualified in the 100m finals in the recent Asian Championships in India. Khairul was a favourite for the gold medal in the Asian meet but a false start saw the Malaysian a non-starter in the final.

Khairul is Malaysia’s hope for a sprint double in next month’s 29th Sea Games in Kuala Lumpur. The athletics events will be held at the Bukit Jalil Stadium.

Getting a “feel” of the newly laid track is a big boost to Khairul’s confidence and Malaysians could well see the rise of this talented sprinter and better things to come from him.

Jegathasen has described Khairul’s feat as “fantastic” and believes that Khairul is going to achieve more in time to come.

Khairul also holds the 100m record with a time of 10.18 he sat at last year’s Sukma in Kuching, Sarawak.