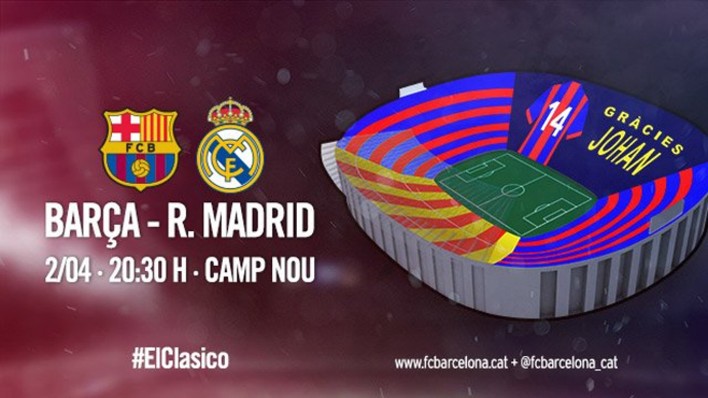 The self-styled biggest game in world football takes on a different significance on Saturday as Barcelona pay homage to legendary former player and coach Johan Cruyff for the visit of Real Madrid in El Clasico.

Over 90,000 fans will take part in a pre-match display reading “thank you Johan” ahead of Barca’s first match since the Dutch great passed away at the age of 68 last week after a short battle with lung cancer.

Barca host Madrid 10 points clear of their eternal rivals in the La Liga title race and on the verge of a sixth league title in eight years.

Moreover, they are favourites to become the first side ever to retain the Champions League — a feat that would deliver a fifth European Cup in 11 years.

Barca’s little more than a decade of dominance has been propelled by the brilliance of Lionel Messi, Andres Iniesta and Xavi Hernandez on the pitch and astute coaching of Frank Rijkaard, Pep Guardiola and Luis Enrique from the touchline.

Yet, they are all united by a style and philosophy implemented by Cruyff over 20 years ago that continues to serve Barca today.

“To talk about Cruyff is to talk about football at its best,” said Enrique, as the Barca squad joined over 60,000 fans in paying their respects at a memorial set up for Cruyff at the Camp Nou this week.

“He leaves behind a very important legacy, a legacy that this club will perpetuate.

“We want to copy and improve this style of play which combines results and a spectacular attacking football.”

Rarely has any side displayed such spectacular attacking football as the Barca 2015/16 version.

Madrid’s visit offers the chance to stretch an unbeaten run in all competitions to 40 games with Messi and strike partners Luis Suarez and Neymar already having scored a combined 107 times this season.

Yet, Barca weren’t always a hugely succesful behemoth supported by millions of fans around the world.

When Cruyff arrived as a player from Ajax in 1973, Barca hadn’t won the league in 13 years.

On his return to the Catalan capital as a coach he won four consecutive Liga titles and delivered the club’s first European Cup in 1992.

He was Barca’s most successful ever coach with 11 trophies before being overtaken by his former captain and pupil Guardiola’s 14 in four glorious years in charge between 2008 and 2012.

“I didn’t know anything about football until I knew him,” Guardiola told Catalan radio station RAC1.

“He opened our eyes to how to be different, that is why we are his followers. It was a priviledge to be able to enjoy him as a coach, above all for the knowledge he gave us.”

Cruyff’s ideals placed an emphasis on technique over physical power in the same way he had to win three Ballon d’Ors as the world’s best player during the 1970s.

“Messi is the one that runs the least and in that he is the best pupil of Cruyff,” added Guardiola.

A popular call has risen amongst Barca fans for the club to rename the Camp Nou in Cruyff’s honour.

Yet, perhaps the best homage came from this Barca side on the field when Messi passed a penalty into the path of Suarez to slot home in a 6-1 rout of Celta Vigo in February.

The move was reminiscent of one of the Cruyff’s most famous moves as he and Jesper Olsen played a one-two for Cruyff to score when playing for Ajax against Helmond Sport in 1982.

“It makes you happy for people to remember you after so many years. It’s lovely — the things football gives you,” Cruyff said afterwards.

Yet, as Madrid travel to the Camp Nou trailing in Barca’s wake, it is what he gave the Catalan giants that will prove his lasting legacy. – Agence France-Presse