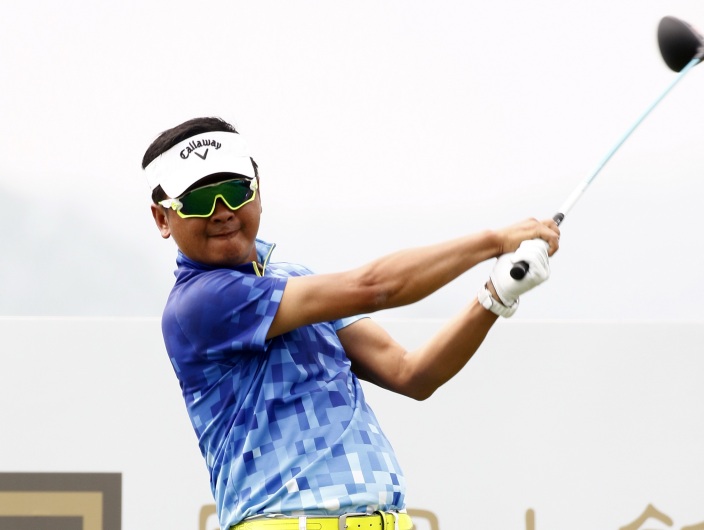 Local stalwart Lin Wen-tang soared on the wings of two eagles to shoot a superb nine-under-par 63 and grab a two-shot lead in the opening round of the US$150,000 Charming Yeangder ADT on Thursday.

Lin started superbly with eagle-birdie-birdie from the first and added two more birdies to turn in 30. He went on to pick up birdies on 13 and 15 and sank a 14-footer for his second eagle of the day on 16 before stumbling with a lone bogey on 17 at the National Golf Country Club.

American Greg Moss, James Byrne of Scotland and Pijit Petchkasem of Thailand shared second place after signing for matching 65s at the Charming Yeangder ADT, which is one of the richest events on the Asian Development Tour (ADT) this season.

“I got off to a great start and that gave me some good momentum. I hit my second shot from 123 yards and the ball went straight into the cup on the first! I went on sink a six-footer and a four-footer for birdies on second and third respectively,” said the 41-year-old Lin, a six-time winner on the premier Asian Tour.

Lin, ranked 341st on the Official World Golf Ranking (OWGR), is currently in the running to represent Chinese Taipei in the Olympic Games this August. His fine round of 63 would have set a new course record if not for the preferred lies in play.

“I had a great save for par on 12. My second shot landed on the pavement and I took a free drop from there. It was a tough chip I thought but the ball landed where I wanted it to be and I managed to sink that putt. That was one of the highlights for me today.

“I thought my tee shot on 16 would land in the bunker but it went passed the bunker and landed on the edge. I hit my second shot to about 14 feet from the pin. It was a huge downhill slice but I made that putt for my second eagle,” added Lin, who holds two victories on the ADT.

Moss, who finished tied-second in the last edition, battled against an upset stomach to return with a round of one eagle and six birdies against a lone bogey.

“I feel good playing here. I was just being patient out there. I know I can make a lot of birdies. I took advantage of the par-fives on the back. I stayed out of trouble and I managed to put the ball in the right spots,” said the 29-year-old American.

“I am a little under the weather. I had a stomachache since Tuesday morning but I guess when you’re sick, it takes your mind off a lot of things. I hope I can get better soon,” added Moss, who negotiated his way around the course with only 26 putts, including a 15-footer for eagle on 16 and a 30-footer for birdie on 10.

Byrne, a two-time winner on the ADT, was pleased to return with a bogey-free round highlighted by seven birdies, which included five straight birdies from the 12.

“I putted very well. Everything was solid for me today. I missed quite a few chances on the front nine but I had a good run on the back when I reeled in five successive birdies. That pretty much sums up the round,” said the 27-year-old Scotsman, who needed only 27 putts.

The Charming Yeangder ADT will provide another opportunities for players to earn OWGR points, which will be key in qualifying for the Olympic Games taking place in Rio de Janeiro in August.