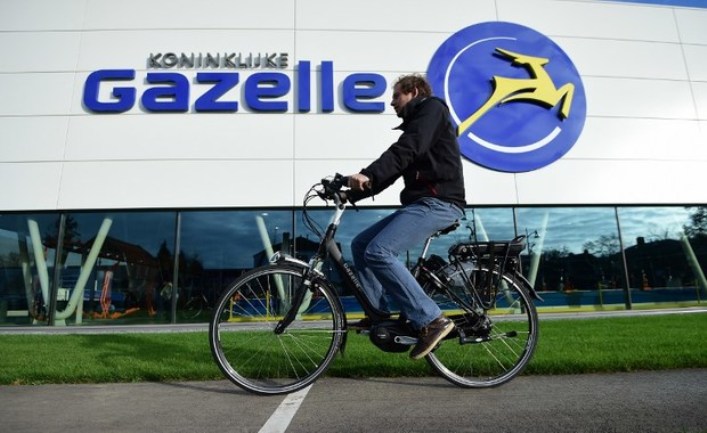 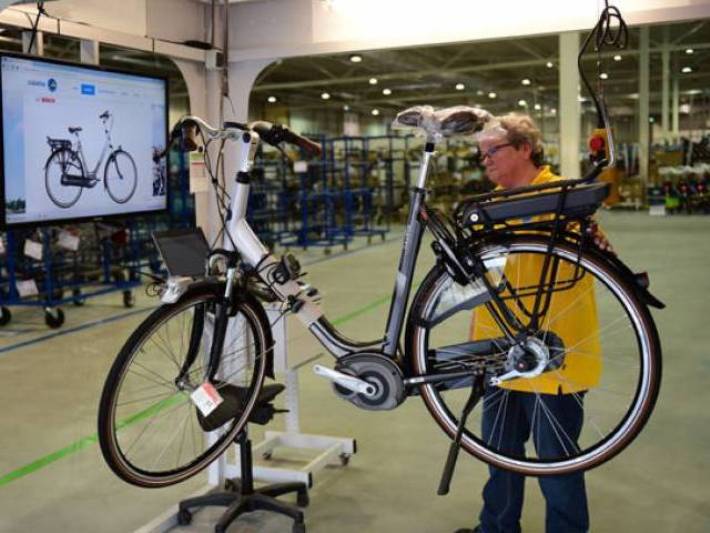 On the busy assembly line at Gazelle, one of the top Dutch bike manufacturers, a quiet revolution is taking place: mixed with wheels, brakes and saddles are now batteries and engines.

Sales of electric bikes are soaring across Europe, particularly in the Netherlands and Germany, and three out of every 10 cycles made by Royal Dutch Gazelle are equipped with some motorised help.

It’s giving a welcome boost to the European bicycle industry as it squares up to stiff competition from Asian companies.

The Dutch love of cycling in this flat country stretches back more than a century and there are more bikes than people — 20.5 million for a population of 17 million. So it’s hardly surprising that the Netherlands is at the forefront of developing the latest in cutting-edge cycling technology.

“The electric bike has given an enormous boost to the cycling market,” financial analyst Gerard Rijk from SNS Securities told AFP.

Some 1.4 million electric bikes were sold across the European Union in 2014, compared with 907,000 the year before and just 98,000 in 2006, according to figures from the Confederation of the European Bicycle Industry (CONEBI).

In the Netherlands, 21 percent of total bike sales in 2014 were electric cycles — more than any other country in Europe.

While the figures for 2015 are not yet available, Gazelle says electric bikes have increased to represent almost a third of all sales in recent months.

The company, owned by the conglomerate Pon Holdings, recently invested some 10 million euros ($10.7 million) in renovating its factory in Dieren, where it produces around 275,000 bikes a year.

“In the Netherlands, the normal bike market is flat or declining slightly, whereas the e-bike continues to grow,” Gazelle spokesman Ferdi Ertekin told AFP, pointing to an annual growth of 10 percent.

Accell, another major Dutch player which owns popular brands like Batavus, Koga and Sparta, has seen the same trend.

It recorded a 20 percent increase in electric bikes sales in the first quarter of last year, while sales of traditional bikes only rose four percent.

– Getting on your bike –

“We are seeing people getting on electric bikes who in the past did not cycle, or cycled very little,” he said.

“Some elderly people for example are using electric bikes. In the past if an elderly person found it difficult to catch their breath, or if there was too much physical effort involved, then the bike was parked in the garage and stayed there.”

But the electric bike is not just targeted at countries where cycling is well-established as a form of leisure or travel.

The extra “oomph” such bikes give to pedal power mean people in more hilly and mountainous places such as Austria, France, and Italy are also getting in on the act.

Surprisingly, a market for “sports” electric bikes has also sprung up, said Rijk.

“It was kind of unexpected. You would have thought the sporting types would not be especially interested in sitting on a magnificent mountain bike and getting a little electric help.”

But on city roads like in The Hague or Amsterdam where hordes of bicycles can clog the streets at rush hour, electric bikes remain relatively rare.

“If you have to stop 15 times at a red light then having an electric bike doesn’t really serve much purpose,” said Van Es. “You can’t really get up any speed.”

Out in the countryside, however, where commuters often travel long distances to get to work, e-bikes that can reach speeds of up to 45 kilometres (28 miles) an hour are coming into their own.

Their main disadvantage is the price tag.

In the Gazelle catalogue, an electric bike costs an average of 2,000 euros, compared with about 600 euros for a traditional pedal power bike.

Specialised and luxury bikes, electric and non-electric, may however prove the saviour of European manufacturers to stave off competition from Asian firms wallowing in cheap labour.

Electric bikes with their more complicated assembly will likely continue to be produced in Europe, while cheaper models will come from Asia, analysts say.

Around 60 percent of all bikes sold in Europe are still made on the continent, but that compares with 76 percent in 2000, according to CONEBI.

“For local manufacturers, the high-end market segment including electric bikes is of the greatest importance,” said Rijk.

“We’re talking about the survival of the industry.” – Agence France-Presse