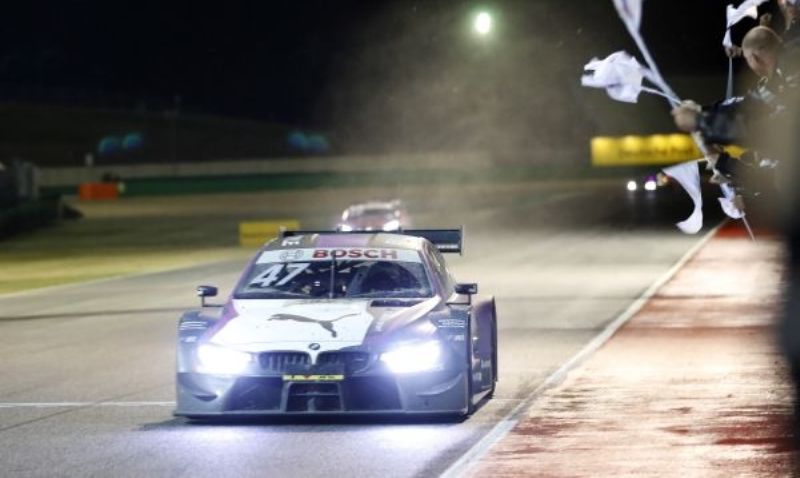 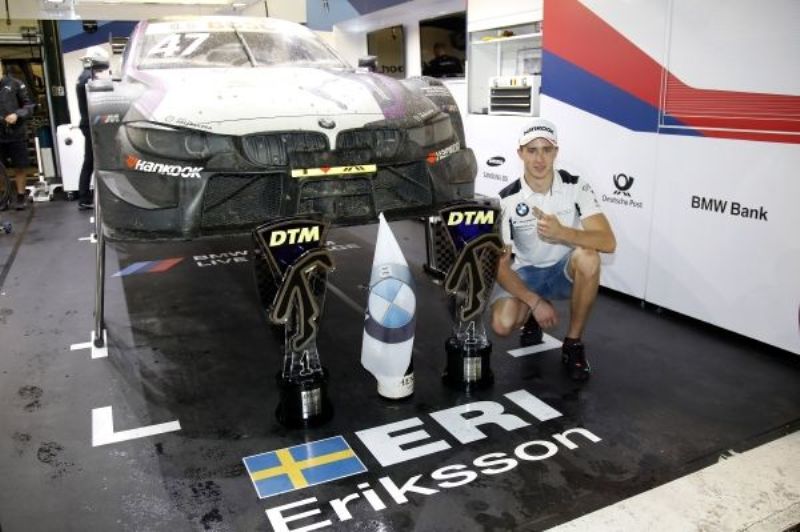 First DTM win in his 14th race: Former BMW Motorsport Junior Joel Eriksson (SWE, BMW M4 DTM) was rewarded for taking risks in the rain-drenched lottery of Misano (ITA) and topped the podium for the first time in his rookie season. Eriksson was the only driver to start on slicks despite the changeable weather and the strategy paid off as he became   the youngest BMW victor in the history of the DTM and the second-youngest DTM winner of all time.

Only Pascal Wehrlein (GER, Mercedes) had claimed his first triumph at a younger age than the 20-year-old. Alessandro Zanardi (ITA, BMW M4 DTM) caused a similar sensation. The guest driver stayed calm when the rain came, while most of the established drivers had to change tyres several times. Zanardi crossed the line in an outstanding fifth place.

The other BMW drivers missed out on the top ten. Bruno Spengler (CAN, BMW Bank M4 DTM) finished in eleventh and will receive one point in the drivers’ championship, as Zanardi was racing outside the championship. Marco Wittmann (GER, BMW Driving Experience M4 DTM) and Timo Glock (GER, DEUTSCHE POST BMW M4 DTM) were involved in early collisions and had to be content with finishing in 13th and 15thpositions. Philipp Eng (AUT, SAMSUNG BMW M4 DTM) claimed 16th place while Augusto Farfus (BRA, Shell BMW M4 DTM) retired after an accident.

“I am unbelievably proud of Joel. Congratulations on the first DTM win! At just 20 years of age, he is the second-youngest DTM winner of all time. We’re going to celebrate that now. For Alex Zanardi, a 51-year-old, to finish the same race in fifth is just incredible. He did a great job throughout the whole weekend. We were not rewarded for our brave strategy yesterday but today we had that little bit of luck on our side. It wasn’t supposed to rain at all during the race but the forecast was well off the mark. That made it a pretty chaotic race – and it ended well for us. It’s a shame that more of our drivers were unable to follow Joel and Alex into the top ten. Nonetheless, we will try to take this momentum with us to the Nürburgring.”

“I am delighted for Bart Mampaey and the guys from BMW Team RBM. Congratulations on the win! It simply wasn’t a good weekend for us. All of our drivers were involved in incidents today and we had no luck with our strategy. We pitted early today to make sure we’d be OK in case of an early safety car period but that tactic did not pay off.”

“I had a fantastic start and I was in second place when Loic Duval came from behind and drove into the side of my car. That caused some tyre damage and ruined my race early on. We did change tyres at the right time when the rain started but I was already too far behind. Congratulations to Joel on the win! He can throw a party now.”

“That was another crazy race. It was actually going OK for me but then there was a bit of contact with another car from behind. It wasn’t hard, but in the slippery conditions it was enough to spin me. That’s how the accident happened.”

“I actually had a very good start and got to fourth place but we made the wrong strategic decision by coming in too early and changing to slicks. The race was over for us after that.”

“Joel is the only one who started on slicks. That meant he was lapping really slowly early on. The weather kept changing, yesterday and today. That is why we used a different strategy for each of the three cars. The engineers and mechanics did a fantastic job. Joel did great to keep the car on the track and claim the victory. Thanks to the whole team, and to BMW.”

“Unfortunately, I had a bit of bad luck with the rain in both races. The strategy was right on Saturday but the safety car came out at the wrong time. I switched to slicks very early today and had to come in again when the rain came back. All in all, eleventh place and one point in the drivers’ championship is OK if you consider that I started from 18th. Congratulations to Alex on his great result today – and to Joel on his first DTM win, of course.”

“We were a bit fortunate yesterday but didn’t have the luck with the strategy today. The result shows that. Now I hope that it goes a bit better next time.”

“I am simply speechless. I have been dreaming of a DTM win since I was a kid. Now I am topping the podium and don’t know what to say. It all feels unreal. We took a risk with our strategy and it was really tough to keep the car on the track when it started to rain again. But today was just our day. It was written in the stars that I would celebrate my first DTM win here. It’s unbelievable.”

“Fifth place is the payoff for the whole weekend. I am very happy with this result and at my age, I won’t get too many more opportunities to celebrate racing successes like this. I had a very good racing speed and wasn’t sure what to do when slower drivers kept appearing in front of me” he joked. “Seriously, I am very grateful to have been given this opportunity by BMW Motorsport. They always believed that I could do it. This trust is a great gift – and I am happy that I was able to vindicate that. Many thanks to the DTM family too, for welcoming me with open arms. I will always have a place in my heart for this weekend. It has taken me 51 years to experience it – but at least I got that chance.”