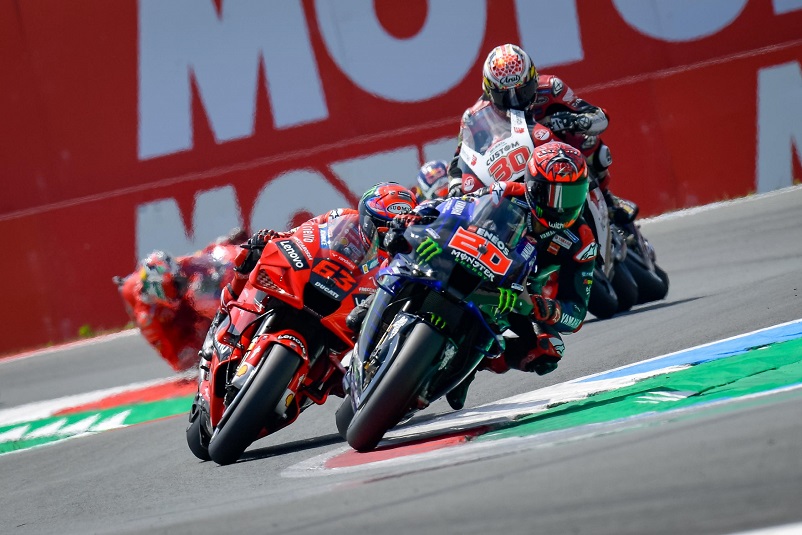 From the noise and the adrenaline of the MotoGP™ World Championship, we find ourselves in a period of tranquility and calm during the summer break. What better time to take a different look at our opening nine rounds of 2021 then, with just one image from each summing up what went down. Because, after all, a picture paints a thousand words.

Pecco Bagnaia (Ducati Lenovo Team) was one of the riders who shined brightest under the lights of our opening event of the season: the Barwa Grand Prix of Qatar. Squeezing the full potential out of his GP21, the Italian teamed up with Johann Zarco (Pramac Racing) to leave World Champion Joan Mir (Team Suzuki Ecstar) without a podium on his first outing with the number one attached to his machine.

El Diablo conquered Qatar just one week after his factory Yamaha counterpart Maverick Viñales had clinched the opening win of the year. Following a turbulent 2020 that saw his title hopes go up in smoke in the space of a handful of rounds, the Frenchman exploded with relief and joy in parc ferme as the pressure of replacing Valentino Rossi was lost in an instant.

Portuguese GP: The return of 93

Marc Marquez (Repsol Honda Team) completed his long-awaited return to the premier class at the 888 Portuguese Grand Prix, finally putting behind him a long and dark period following the serious injury he suffered in Jerez in July of last year. It was like the Spaniard had never been away as he rolled at full speed down the Portuguese rollercoaster.

After getting his first dry MotoGP™ win at the Jerez-Ángel Nieto Circuit, Jack Miller (Ducati Lenovo Team) could not hold in the emotion. After celebrating in Parc Ferme with all of the Bologna factory, the Australian slumped down alongside his GP21 for a moment of reflection after achieving a dream he’d held since he was a child.

French GP: On a Knife Edge

Italian GP: Dancing with the devil

Quartararo is congratulated at the end of the race after scoring his third win of the season at Mugello, putting behind him the drama of Jerez where victory slipped through his fingers.

The seventh round of the season, the Gran Premi Monster Energy de Catalunya, saw the fans return to the grandstand for the first time since March 2020. In the picture, Lorenzo Savadori (Aprilia Racing Team Gresini), Takaaki Nakagami (LCR Honda Idemitsu), Enea Bastianini (Avintia Esponsorama) and Iker Lecuona (Tech3 KTM Factory Racing) all share the track under the watchful eyes of the brilliant MotoGP™ fans.

German GP: The Undisputed King of the Ring

581 days after his last success, Marc Marquez couldn’t contain his emotions on the podium at the Sachsenring. The eight-time World Champion and the Honda family came together to celebrate what will no doubt go down as one of the great victories in the illustrious career of the Spaniard. This is what eleven consecutive German GP victories means to the 93.

Despite being pushed by his rivals, Quartararo was able to clinch his fourth victory of the year at the TT Circuit Assen, ahead of Viñales and Mir, to take the title lead into the summer break. In the picture, Bagnaia tries to hold off the flying Frenchman. – www.motogp.com