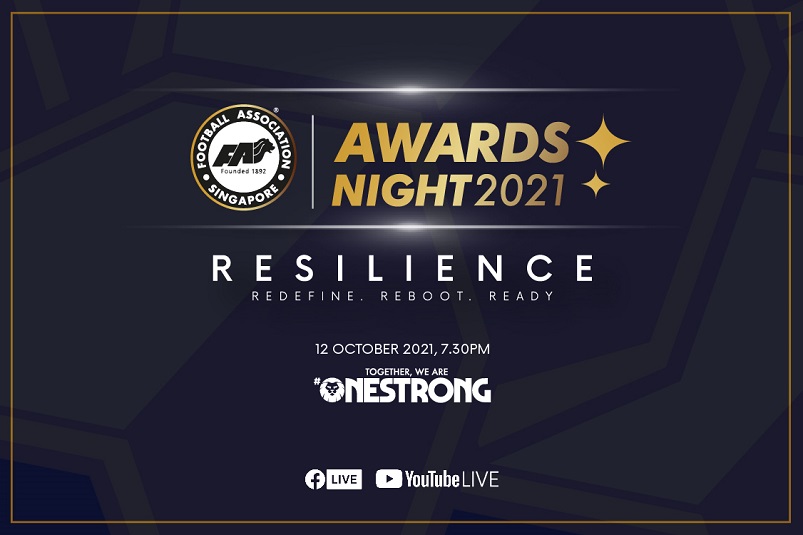 The very best of the 2021 AIA Singapore Premier League (SPL) season will be honoured at the FA of Singapore (FAS) Awards Night 2021.

An annual event that brings the local football fraternity together, the event also serves to celebrate the continued resilience of the local footballing community amid the COVID-19 pandemic. The Awards Night 2021 will take place on Tuesday, 12 October at 7.30pm at Aux Media StudioThe very best of the 2021 AIA Singapore Premier League (SPL) season will be honoured at the FA of Singapore (FAS) Awards Night 2021.

An annual event that brings the local football fraternity together, the event also serves to celebrate the continued resilience of the local footballing community amid the COVID-19 pandemic. The Awards Night 2021 will take place on Tuesday, 12 October at 7.30pm at Aux Media Studio.

Outstanding individuals from the 26th season of the SPL will be recognised across 10 categories – one more than last year as the Golden Glove Award will be presented for the first time.

The final nominees and eventual winners for the AIA Player of the Year, AIA Young Player of the Year, Polar Mineral Water Coach of the Year, SELECT Goal of the Year and AIA SPL Team of the Year were selected by a judging panel comprising the current Head Coaches, General Managers and Team Captain from the eight SPL clubs participating in the 2021 season as well as FAS Technical Director Joseph Palatsides, FAS Head of Elite Youth Fandi Ahmad and five representatives from separate media outlets.

In light of the current safe-distancing measures, this year’s event will be attended only by relevant personnel, such as all award winners, presenters and essential event crew. As with previous years, the Awards Night will be streamed online on the FAS’ Facebook page and YouTube channel to allow fans to follow the night’s proceedings.

Having bagged 19 goals in 20 games to date, Tomoyuki Doi is on course to take the SPL Top Scorer award ahead of the final round of SPL fixtures this Sunday. The Hougang United FC attacker, 24, is also a strong contender for the AIA Player of the Year gong as he makes the final three-man shortlist for the second year running.

The Japanese star will have to fend off competition from Lion City Sailors FC duo Stipe Plazibat and Jorge Fellipe. Croatian striker Plazibat, 32, has struck 14 goals in 17 games in his sixth season in Singapore, tallying 77 overall; he was also among the final three-man shortlist last year. His Brazilian team-mate Fellipe, also 32, has been a standout at the heart of defence in his maiden SPL campaign.

The Lion City Sailors also have two nominees on the final three-strong shortlist for the AIA Young Player of the Year award. Midfielder Saifullah Akbar, 22, could win the accolade for the second year in a row but team-mate Nur Adam Abdullah, 20, will be stiff competition having impressed with his dynamic displays at left-back in his first season at the club.

Albirex Niigata FC (S) talisman Ryoya Taniguchi, 22, is the third nominee as the Japanese attacking midfielder is recognised for a breakout season that has seen him score nine times and make eight assists so far, both club-leading totals.

Meanwhile, Albirex Niigata (S) Head Coach Keiji Shigetomi is on the final shortlist for a second consecutive year for Polar Mineral Water Coach of the Year, alongside his counterparts Clement Teo of Hougang United and Philippe Aw from the Young Lions. Shigetomi, 42, won his first SPL title last season during his second year in charge of the White Swans and they still have a chance to retain it.

Teo, 54, led the Cheetahs to a third-placed finish this season and will hope to go one better after also being nominated in 2019 while Aw, 43, has earned plaudits for the way his Young Lions side has performed in his first season at the helm.

At the other end of the pitch, Albirex Niigata (S) custodian Takahiro Koga will become the first-ever recipient of the SPL Golden Glove accolade – having already amassed eight clean sheets, he has three more than the next closest goalkeeper and cannot be overtaken with one game left.

There will also be an AIA SPL Team of the Year presentation to recognise the best 11 players in a 4-3-3 formation.

All these honours will be bestowed at the Awards Night, which will start at 7.30 pm. The entire event will be streamed online at the FAS’ Facebook page and YouTube channel in order for fans to enjoy it. – www.fas.org.sg 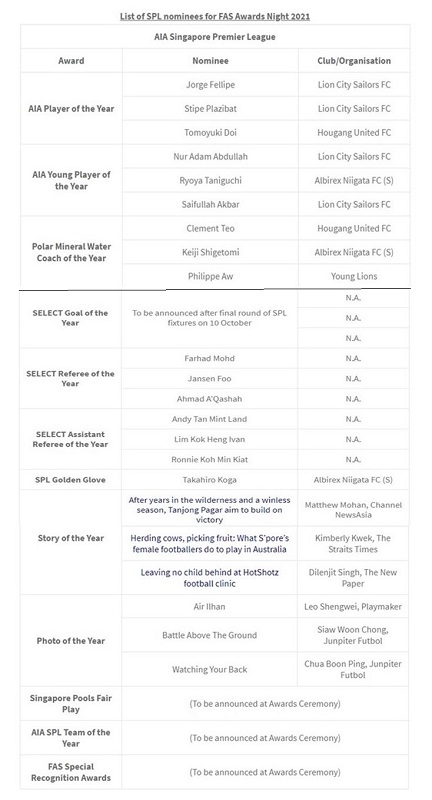