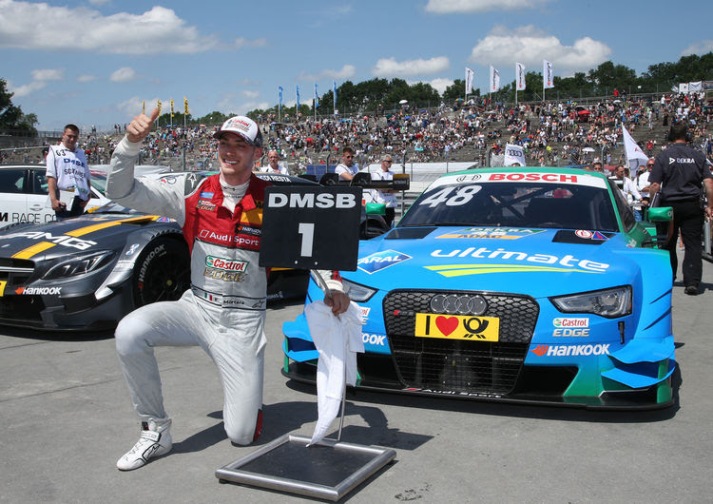 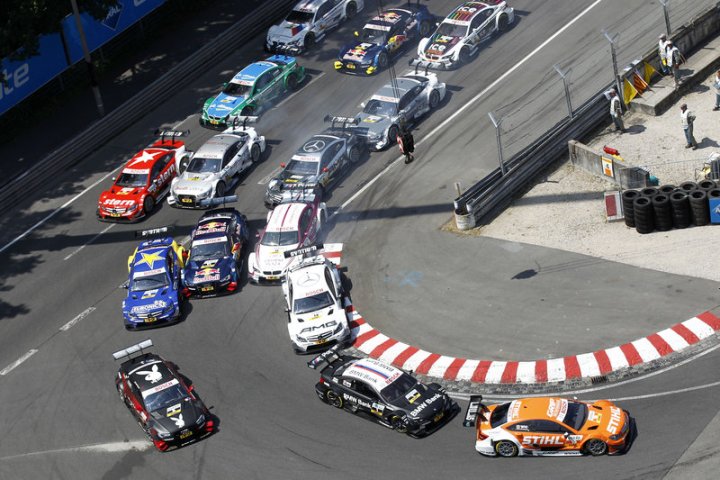 Edoardo Mortara on winning takes lead of the standings

With that, the Italian from Audi Sport Team Abt Sportsline not only made thousands of Audi fans lining the city street circuit around Nuremberg’s Dutzendteich lake cheer. At the wheel of his Castrol EDGE Audi RS 5 DTM, he took the lead of the overall standings again as well and is the first driver to have won two DTM races this year.

“Winning at the Norisring as an Audi driver is simply fantastic,” Mortara said after the hot battle at temperatures of about 30 degrees centigrade in the shade. “It was a difficult race because I had pressure from behind the whole time. That makes me all the happier.”

Jamie Green, on taking second place in the Hoffmann Group Audi RS 5 DTM of Audi Sport Team Rosberg, even perfected an Audi one-two. In a photo finish, the Briton crossed the finish line, trailing his brand colleague by just 0.531 seconds and 0.372 seconds ahead of Mercedes-Benz driver Paul Di Resta. “Obviously, I’d have liked to still attack Edo (Mortara), but I felt that was too risky because the rearward gap wasn’t very large,” said Green. “I didn’t want to jeopardize Audi’s victory.”

The Audi squad had laid the foundation for this triumph in qualifying. With Mattias Ekström, Jamie Green and Edoardo Mortara in grid positions two, three and six, three Audi RS 5 DTM cars started Saturday’s race from the first three rows.

In the first third of the race, it was initially Mattias Ekström who gave Audi fans rise to dream of victory. In his Red Bull Audi RS 5 DTM, the Swede fought duels with the two leading Mercedes-Benz cars. In an attempt to bump Robert Wickens from second place, on braking into turn one on lap 20, a collision occurred between Ekström and Wickens which caused Ekström to slide into the leader, Christian Vietoris. “I feel incredibly sorry for Christian,” said Ekström. “He was totally faultless in getting entangled in the tussle between me and Wickens.”

“That Mattias (Ekström) wouldn’t do anything like that on purpose should be clear to anyone,” said Dieter Gass, Head of DTM at Audi Sport. “We’d have preferred to celebrate our first Norisring victory since 2002 in a slightly different way. But ‘that’s racing.’ The collision between Wickens and Ekström was a racing accident of the kind that frequently happens at the Norisring. Eki has often thrilled us with his overtaking maneuvers. This time, it went wrong, which wasn’t his fault alone. We wouldn’t even be discussing it at all if it hadn’t affected a third driver, Christian Vietoris, who was not involved in the maneuver.”

In the shadow of events at the front of the field, Adrien Tambay drove a great race as well. The Frenchman in the Speedweek.com Audi RS 5 DTM advanced from position 15 on the grid to seventh place and thrilled the fans with numerous overtaking maneuvers.

As a result of Edoardo Mortara’s victory, Audi Sport Team Abt Sportsline took the lead of the teams’ standings as well. In the manufacturers’ standings, Audi, before race two on Sunday (start at 13:10/live on “Das Erste”), is trailing leader of the standings BMW by only 13 points.