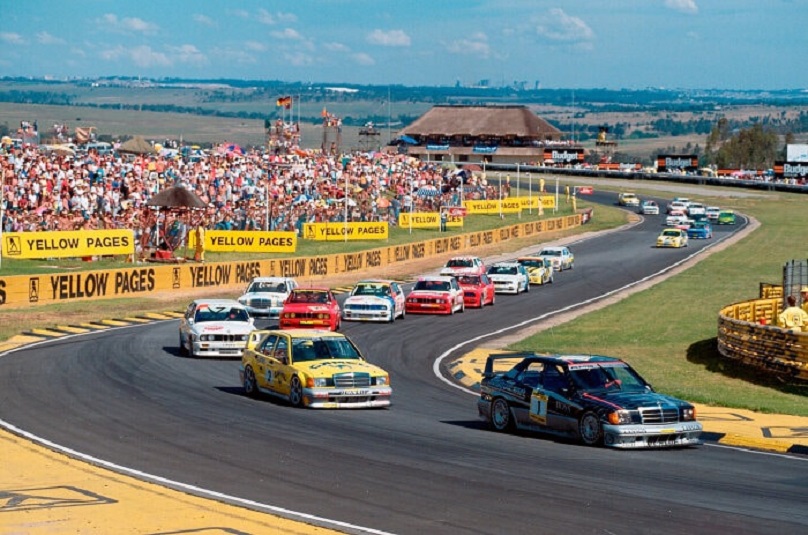 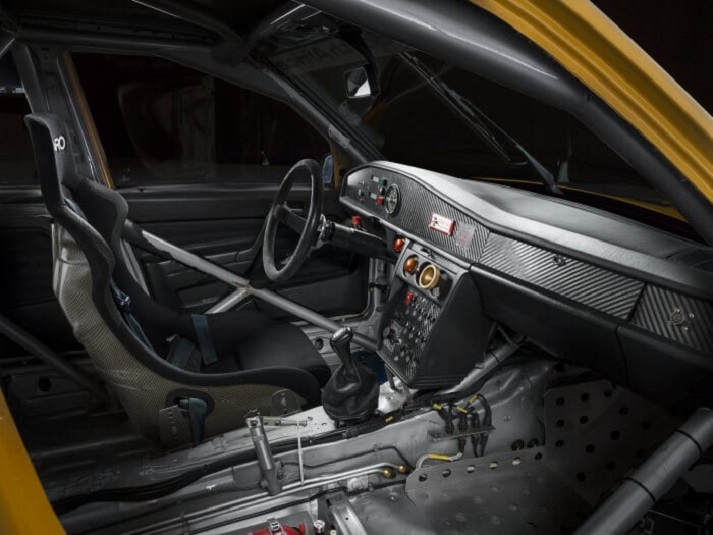 Thirty years ago, Roland Asch won the race in South Africa in a special EVO II

The M7 test vehicle became the much acclaimed “Camel” car

Stuttgart. Mercedes-Benz “st – sport technik” surprised the competition with its technically outstanding 190 E 2.5-16 Evolution II racing touring car at a DTM invitation race in Kyalami, South Africa, on 18 November 1990. This EVO II was the first works test car to be equipped with the special anti-lock braking system (ABS) for racing, which had been jointly developed by Mercedes-Benz and Bosch.

Against tough competition, Roland Asch won the second heat and the overall classification on that race Sunday, which, however, did not count towards the DTM championship standings. Today, the car is part of the Mercedes-Benz Classic collection. ABS keeps a vehicle steerable during maximum full-stop braking. The system has been an important safety standard in production vehicles for many years but in racing it is only used occasionally. For many years now, Mercedes-AMG GT3 and GT4 have offered an adjustable anti-lock braking system designed specifically for the race track.

M7 test car: The 190 E 2.5-16 Evolution II was code-named the M7 in-house. It was prepared especially for this race by the companyʼs own Mercedes-Benz “st – sport technik” department. “With the help of a climatic test bench, which was very rare at the time, we prepared the engine for use at an altitude of 2,000 metres above sea level,” recalls former project manager Gerhard Lepler. But the real highlight was an electronic brake control system. “Bosch had developed a new programmable control unit for the 126 model series S-Class,” says Gerhard Lepler, explaining the basis of the racing ABS. “This device even makes it possible to adjust the chassis, making it a forerunner of the Electronic Stability Programme ESP®.”

Real-life testing: Roland Asch, who drove almost all the test vehicles developed for the DTM at Mercedes-Benz in those years, was enthusiastic about this racing ABS system. “Initially, we kept the fact that the car was equipped with it secret in Kyalami,” explains racing driver Asch, born in Ammerbuch. “When other drivers approached me about a button on the steering wheel that was used to turn the ABS on and off, I spun them a yarn about a brake adjustment.” Even today he smiles as he recalls the reactions of the competitors on the track: “Klaus Ludwig couldnʼt believe it when I cut him up!”

The “secret car”: Mercedes-Benz prepared very carefully for the “Yellow Pages 200” race in Kyalami over a distance of almost 200 kilometres. The original plan was to ship the cars to South Africa by sea freight. There was one shipping container for each car and its spare parts. The transport weights had been calculated as 1,060 kg for the racing touring car and 220 kg for parts, from spare clutches to cleaning cloths sporting the Mercedes star. However, the vehicle was not quite ready for shipping on the scheduled dispatch date. “I was almost ready to cancel the mission,” engineer Lepler recalls. But the head of AMG of South Africa, Reinhard A. Schulz wouldnʼt have it and organised air transport and even provided funding for the costs. A Boeing 747 SP operated by Air Namib flew the small works team including the car and all the parts from Frankfurt to South Africa.

Excitement amongst the public: AMG of South Africa made full use of the carʼs late arrival as a PR opportunity. Schulz passed the news of a late “secret car” to the local media. The media gratefully took up the story and in the days leading up to the race they reported time and again about a very special works assignment. At the race location, it was evident who had actually financed transportation via Jumbo jet: the Camel cigarette company. Within three days, the Mercedes-Benz was wrapped with corresponding yellow film including the lettering. At that time, vehicle film wrapping was rare. Even Asch was amazed by the new colour scheme of the M7: “I didnʼt even recognise my car at first.” M7 was later converted into an advertising medium for the campaign for the 2000 Summer Olympics in Berlin. When Sydney was awarded the contract in September 1993, Gerhard Lepler arranged for the Camel livery to be restored the following year and it was transferred to the Mercedes-Benz Classic collection. “Iʼm really happy when I get the chance to drive this particular Mercedes-Benz at demonstration drives or historical events,” says Asch three decades after it was unveiled in South Africa. 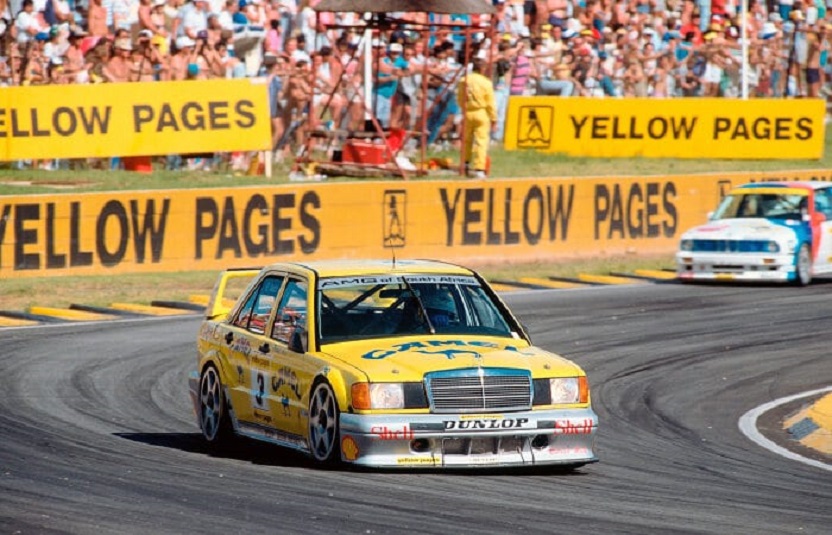 The race: In the pits, the other four Mercedes-Benz cars registered by AMG had to move together to make room for the works late-comer. Roland Asch, DTM runner-up in 1988 and 1993, then promptly put the “Camel car” at the front of the grid. “I still canʼt believe how late you can brake with the racing ABS,” he explained to the team after practice. On the day of the race, Kyalami was sold out, 42,000 spectators lined the race track. Roelof Frederik “Pik” Botha, South Africaʼs Foreign Minister, shook hands with all the drivers before the start. The two heats were broadcast live on television, with alternating commentaries in English and Afrikaans. Initially, after the start of heat one, Asch fell behind his AMG colleagues Klaus Ludwig and Fritz Kreutzpointner, but finally came second behind Ludwig. He won the second heat and the overall classification ahead of Ludwig and rejoiced over the advantages of the racing ABS: “I can concentrate fully on driving and only have to brake at the last moment.” The works “st – sport technik” department headed by Gerhard Lepler was dissolved at the end of 1990. From the start of the 1991 season, AMG took over the entire development of the DTM touring race cars from Mercedes-Benz.

First trials: From 1978 on, Mercedes-Benz offered its anti-lock braking system for the S-Class in model series W 116. The Stuttgart-based brand first used ABS on the race track when the new Nürburgring was opened on 12 May 1984: 20 identical and largely production standard Mercedes-Benz 190 E 2.3-16 cars competed in the Race of the Nürburgring Champions. Grand Prix drivers, former winners of the 1,000-kilometre race at the Nürburgring and some junior drivers fought for victory on a rain-soaked track. The winner was one Ayrton Senna, who was still largely unknown at the time and later became Formula One World Champion in 1988, 1990 and 1991. During test laps in the “Baby Benz” he was initially seriously unsettled: “The brakes are broken.” This was not the case, but the Brazilian driver was irritated by the pulsating brake pedal when the ABS kicked in. Gerhard Lepler, responsible for the deployment of the 20 sporty Mercedes-Benz cars, was able to reassure the driver: “Everything is perfectly OK. Just keep your foot pressed right down on the pedal.” Niki Lauda, World Champion in 1975, 1977 and 1984, finished second behind Senna at the Nürburgring. His opinion: “ABS is the greatest invention since the wheel.” However, Lepler was not yet completely satisfied with this ABS system. Apart from the pulsation in the brake pedal, the sudden loss of the effect on bumps was disturbing. The reason for this was that the sensors detected that the wheels had lost contact with the road surface and signalled black ice conditions to the control unit. This led to the brake pressure being reduced drastically at first and then built up again, albeit far too slowly for motor racing. Test driver Asch described the situation as follows: “Whenever one or more wheels were up in the air on the Nürburgring-Nordschleife, the ABS reduced the brake pressure and I couldnʼt brake at all at first. Sometimes I got really scared.”

Early evolution: The problem was not finally solved until the new control unit developed jointly with Bosch arrived. This set-up made it possible to suppress the pulsing of the brake pedal when the ABS kicked in and the sudden loss of braking power after hitting bumps on the race track. During the DTM/ITC racing years from 1991 to 1996, Mercedes-Benz equipped its racing touring cars with ABS. Formula One also relied on ABS brake support for a number of years. However, in the highest classes of motorsport, ABS was banned to put more emphasis on the skills of the drivers. In the GT3 and GT4 categories of many national and international championships, things are different. In 2020, AMG described its Mercedes-AMG GT3 and GT4 models under the heading of “traction aids” with the following words: “The newly developed ABS system is adjustable in many ways and optimally adapted to the specifications of the current generation of tyres.”