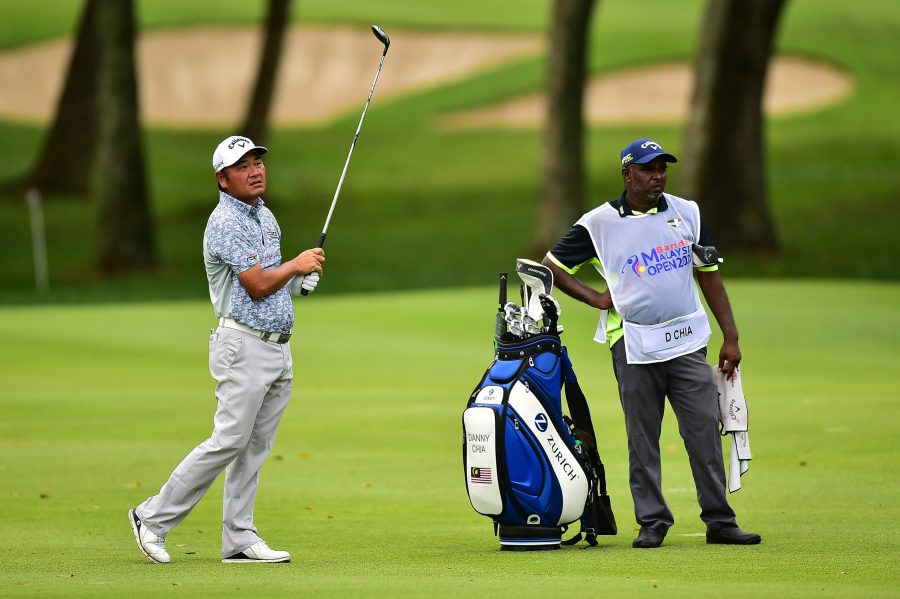 Overnight leader Andrew Dodt of Australia continued his bogey-free run by signing for a second-round four-under-par 68 to stay atop the leaderboard at the weather-disrupted Bandar Malaysia Open on Friday.

Dodt, who opened his campaign with a stunning 63, remained in the driver’s seat after returning with a flawless card highlighted by four birdies for a two-day total of 13-under-par 131 at the highly rated Kota Permai Golf & Country Club.

His overnight two-shot lead, however, was reduced to one by China’s Liu Yanwei, who carded an impressive 65 to take second place in the US$1 million event, which is sanctioned by the Asian Tour and in partnership with the Japan Golf Tour Organisation (JGTO).

Play was halted for the second time this week at 4.15pm local time due to lightning threats. It was later abandoned for the day at 6.00pm.

A total of 77 players will resume their second rounds at 7.40am on Saturday with the third round scheduled to start not earlier than 11.30am.

The halfway cut is projected to be at one-under-par 143 with the leading 65 professionals and ties progressing into the next two rounds.

Asian Development Tour graduate Trevor Simsby of the United States marked the lowest round of the day when he fired a solid 64 to trail by two shots in third place with compatriot Jarin Todd, who posted a 66.

Korea’s Charlie Wi, former winner of the Malaysian Open in 2006, soared with an eagle-birdie-birdie finish from the seventh to register a 66. The 48-year-old Wi, a seven-time Asian Tour winner, sits his fifth place on his own on 135.

The highly acclaimed Bandar Malaysia Open, which boasts a new tagline ‘Pride, Passion, Prominence’, is the flagship event for the Malaysian Golf Association (MGA). It returns to the Asian Tour schedule this week after a four-year hiatus.

It’s hard to back up a 63 but I did with a 68 today, pretty solid. I hit a lot of greens but didn’t hole as many putts as I did yesterday. But all in all, it’s a solid day’s work.

I had like a 10-footer down the hill on the last at the top. To see that going in was nice. But I haven’t really hit into any tricky spots so far this week. Nice to stay bogey-free and play some solid golf.

I didn’t think I played cautious today. I just didn’t hit it as close. I didn’t have as many chances as I did yesterday. The pin positions were pretty difficult.

I’m just playing a little bit technical with my swing. I think about it a lot on the plane coming here. I haven’t been playing well before this week so I just wanted to throw it up a bit and just play the game.

I’ve done that so far and happy to be in a good position with two more days to go. I’m just going to have fun, keep things simple and stay relaxed which is what I have done. Nothing’s changed.

I had to finish the first round this morning, so it was good to just keep going. I have been playing really well lately and this is probably the best I have been hitting my irons.

Some of the pins were in places I could get to them so I could afford to be aggressive, especially as well as I am hitting my irons at the moment.

I’m really happy with everything the last two days and looking forward to the weekend.

It was a good day, hit it pretty good got a few lucky breaks on some of the shots I hit poorly, but rolled in a few putts and just kind of kept it in play.

I didn’t have a five on the card, so I’ve been playing the par fives good. This morning I was five-free until the last hole and then I made a five, so I really wanted to make that putt on the last hole just to kind of get my revenge on the five-less card, which is kind of rare.

I hit a terrible drive on the last hole, a really good second shot, kind of punched it up through the trees, and then a good third shot at went farther than I thought. The putt was fast but kind of just held the line at the end and went in.

I was really tired starting out the second round today. I came back early this morning to finish four and a half holes from round one. I had a great second round. I had zero putt on three holes today. On my last hole ninth, I putted off the fringe and had two chip-ins on 15 and 16.

Nice to have that five birdies in-a-row. It was one of those rounds. After the first round, I took some time to recharge and relax for a bit. That was important I thought. Got off to a solid start and had a nice run of birdies. I feel like if you can play the par threes in level par for the week, you’re doing well, so try to do that.

It’s a very tough green on the ninth. Everything fits to the left. I left myself in a pretty good spot, and then had a nice putt which barely went in and then on the 16th, I pushed my tee shot to the right and had to punch out. And then I made it from probably about 35 yards.

I just want to keep the same kind of level head and momentum and try to not overthink it because there are a lot of birdie opportunities. Again, I want to play the par threes smart and if I can do that, I think I’ll have a good chance.

I’ve been here in Kuala Lumpur for two weeks now. Getting used to the weather and everything. Decided to come here and practise instead of going to New Zealand. I guess that helps. I spend a lot of time in Malaysia when I play in Asia.

I’ve been hitting the ball solid. I just haven’t been able to make any putt. But I maanged to make some coming down the stretch. That eagle on seventh, I hit my driver and then a five-wood on the green to about 30 feet. Fortunately, I was able to make that eagle putt.

The greens are really nice out here and especially this morning when we were the first ones off. The greens are perfect. If you can get it started on line, you know you can make a lot of putts out here.

I took the last two and a half years off. You know I’m getting older and I do want to try the Champions Tour in a couple of years. So I’m just trying to start playing more this year. I enjoy competing. I don’t like to practise as much as I like when I was younger.

But I know I have to put some time in and you know, I just like coming out to Asia to see all the guys and the game of golf grow. I think I can still win again. I hit the ball well. It’s just a matter of making putts.

I had fun playing with Pavit and Angelo these two days. I’ve known Angelo for almost 20 years, so it was always good to catch up with him. He’s so easy to play with. I’ve never played with Pavit but he’s got so much talent. There’s so much talent here in Asia. It is really good to watch.