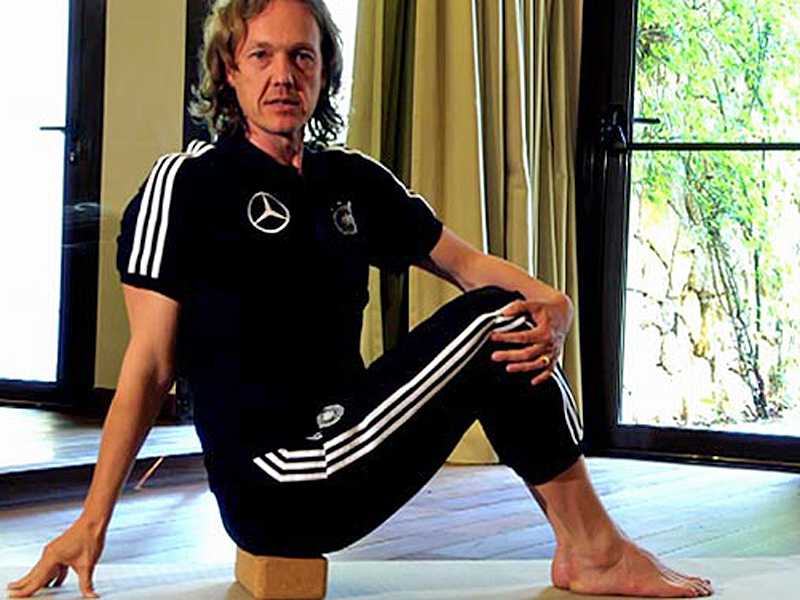 In the macho world of international football, world champions Germany have taken a more spiritual approach and will again employ a yoga teacher, whose pupils include Madonna and Sting, to help prepare for Euro 2016.

“To my knowledge, I was the only yoga teacher working with a national team at the World Cup in Brazil,” Munich-based yoga teacher Patrick Broome told AFP.

Broome is part of Germany’s backroom staff for major tournaments and puts their stars through a series of exercises to relax them physically and mentally.

Now the likes of Germany’s Thomas Mueller, Marco Reus and Mats Hummels are no strangers to yoga postures like ‘lotus’, ‘warrior and ‘cobra’.

“We don’t just want to be top fit physically, but also in the head,” explained Loew.

Broome has accompanied Germany to World Cups and European championships over the last decade.

He offers sessions to help the footballers “improve flexibility, concentration and performance on the field” which in turn helps keep them free of injury.

Broome will hold daily sessions of up to 45 minutes during Germany’s training camp in Switzerland, then at the Euro 2016 finals in France from June 10-July 10.

His sessions are not compulsory and only three of the squad regularly decline to take part.

“Good recovery after a game is essential for the players to maintain their level of performance,” says Broome, who is in his 40s and has been practising yoga for twenty years.

It was Loew’s predecessor, California-based Jurgen Klinsmann, the coach from 2004 until the 2006 World Cup, who first invited Broome into the German camp.

Klinsmann saw the benefits of yoga while living on the west coast of the USA.

Loew then took it a step further by adding Broome, who has worked with pop icons Madonna and Sting in his career, to his backroom staff for Euro 2008.

“At the time, the German press made fun of the players when they were training with rubber bands, to increase their muscle strength, and yoga with ‘all this nonsense’,” said Broome with a smile.

At the players request, Broome accompanied Germany to the Euro 2012 finals in Poland and Ukraine.

Through breathing techniques and holding postures, Germany’s stars “can let off steam quickly” after a match, said Broome.

“It also allows them to stretch and to experience a different physical experience,” added Broome.

Broome, who is now a leading figure on Germany’s yoga scene, puts the players through a “stripped-down version” of yoga, shorn of incense sticks or other far eastern paraphernalia.

“With the players, I am much less into the spiritual side of the practise,” he admits.

Mario Goetze, whose goal won the 2014 World Cup final, is a firm yoga convert, as is former Germany international Per Mertesacker.

The towering Arsenal centre-back revealed before their 2015 FA Cup final win over Aston Villa that he “never miss a session” of yoga with the Gunners.

“It helps a lot. Mentally and physically. Those who do it feel the great benefits,” he explained.

Broome says the spiritual side of yoga helps balance the day-to-day pressures on the players.

In our society of “ever faster, ever more efficient,” yoga is also a powerful remedy for stress management, he added. – Agence France-Presse