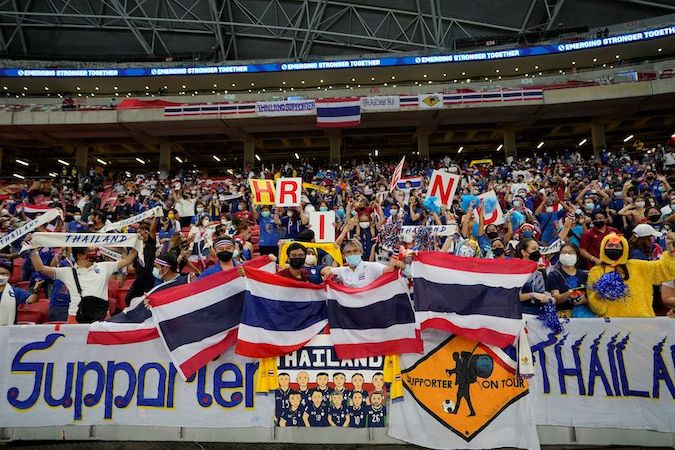 With excitement building ahead of the AFF Mitsubishi Electric Cup 2022, the ultimate prize of Southeast Asia’s flagship football competition will embark on a tour of five cities in the region over the next three months, announced today by the ASEAN Football Federation (AFF).

With the aim of drumming up excitement in the lead up to the tournament, as well as rallying the fans and community to get behind their teams at their home stadiums come December, each stop of the Trophy Tour will feature special appearances by local football legends. The free-to-attend event will offer members of the public opportunities to get a picture of the trophy and legends and take part in stage games and challenges with prizes to be won.

Thai legends Pipob On-Mo and Therdsak Chaiman, together with VIPs and officials from title sponsor Mitsubishi Electric, will attend the Bangkok stop held at the Zpotlight (G floor) at Zpell shopping mall. The event will be held from 11:00am to 5:00pm (local time), with the legends’ appearance and main stage programme starting at 2:00pm.

In addition to the Trophy Tour, AFF and Mitsubishi Electric will also be launching a new corporate social responsibility (CSR) initiative focused on supporting underprivileged children around the region. This initiative will see AFF, the Member Associations and Mitsubishi Electric engage with local charity partners to organise Football Clinics for children in each of the five countries. These children will also be invited to attend the home matches, as well as to participate in the Player Escort Programme during the upcoming tournament.

Taking place alongside the Trophy Tour, the CSR Football Clinics will be hosted by local football legends and aim to give children an opportunity to learn fundamental footballing techniques from their local heroes, but more importantly, inspire these children to dream big and aspire to represent their countries in the future.

The Football Clinic in Bangkok will take place on 24 September at Future Arena from 9:00 to 11:00am local time.

Trophy Tour kicks off in Bangkok on 24 September, with special appearances by Thai legends Pipob On-Mo and Therdsak Chaiman

“We last held the AFF Championship Trophy Tour back in 2018 and saw an overwhelming response from the fans in each city we’ve gone to. As fans across the region gear up and reignite their passion for their teams, it is apt that we bring this initiative back and we are thrilled to launch the AFF Mitsubishi Electric Cup 2022 Trophy Tour, which will present a unique opportunity for fans to get up close with the trophy, as well as to feel more connected to this special tournament,” said AFF President, Major General Khiev Sameth.

“We are also delighted to launch the CSR initiative this year as part of the AFF Mitsubishi Electric Cup 2022. As the region emerges from the pandemic that has hampered many sports activities over the last two years, we are thrilled to work with Mitsubishi Electric to bring football back into the lives of our children in the communities and inspire them to reach for the stars in everything they do.”

Kunihiko Seki, Corporate Executive and Chief Representative Asia Pacific Region of Mitsubishi Electric Corporation said, “Leading up to the highly-anticipated new era of the AFF Mitsubishi Electric Cup, we are delighted to play a major part in bringing the championship trophy to five cities in the region, to give fans and the general public a taste of the experience to come when the main event kicks off in December.”

“Here at Mitsubishi Electric, we strongly believe that it is also important to make football accessible to children from all walks of life and we are proud to support this new CSR initiative as part of the AFF Mitsubishi Electric Cup 2022. ‘Together, We Can Build Better’ is our tagline for the tournament this year, and working together with like-minded partners, we believe this initiative will extend Mitsubishi Electric’s aspirations to engage with both players and fans and to give back to the community through football.”

General Secretary of the Football Association of Thailand, Joe Patit Suphaphongs said, “It is really exciting to kick off the first leg of the AFF Mitsubishi Electric Cup 2022 Trophy Tour here in Bangkok. Our Thai fans are one of the most loyal and passionate supporters in the region and we cannot wait to meet them in person soon. We are also very proud to support AFF in the CSR initiative, which will be a great way to connect our kids with football again.”