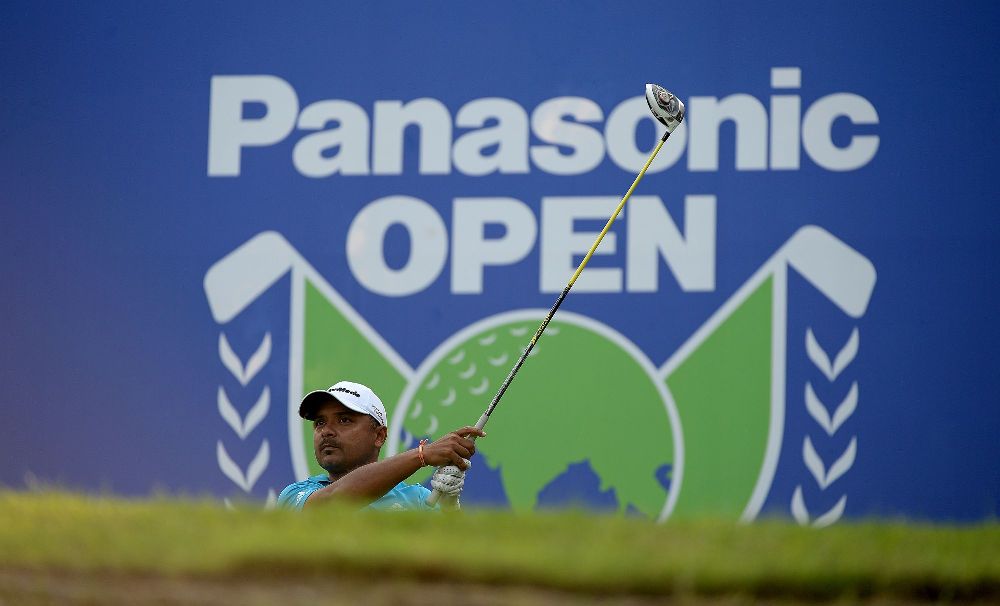 Rahil Gangjee of India rolled in a close range birdie putt on the last hole to hold a one-shot lead after the third round of the US$300,000 Panasonic Open India on Saturday.

The amiable Indian was disappointed not to extend his overnight two-shot lead after shooting a one-under-par 71 at the event sanctioned by the Asian Tour and Professional Golf Tour of India (PGTI).

Thailand’s Panuphol Pittayarat battled into contention with a 69, courtesy of two closing birdies, to trail Gangjee by two shots at the challenging Delhi Golf Club.

After opening with a birdie, Gangjee struggled on the greens and had to battle-tooth-and-nail to stay in contention to end a 10-year title drought on the Asian Tour.

“I wasn’t tensed because that’s what most people are thinking. I didn’t hit the shots and that’s what I didn’t like about the entire day. Overall, I hang in there today so tomorrow will be a lot better,” said the 36-year-old Gangjee.

The home favourite set-up a glorious 12-foot eagle chance on the 18th hole but misjudged the line before settling for a birdie. With four players snapping at his heels, Gangjee knows he must stay calm and patient.

“I hit a bunch of great putts but I had tricky lines so I got a bit unlucky today. I’m still in it with a chance so it will be about holding my nerves on the last 18 holes,” said Gangjee.

Australia’s Ormsby chipped-in for birdie on the 12th hole from the edge of the green and was thankful to escape with a bogey on 15 after his approach shot landed in the jungle. A birdie on the last hole put him within reach of retaining his title.

“I want to tune this putting. I feel good and I’m hitting a lot of good shots. I’m playing pretty feel but I want to get the putter going. I feel like I can get away from them but it is hard when the putter is cold,” said Ormsby, who posted a 70.

Without having any expectations, Siddikur, who is playing in his first event since injuring his back in June, was surprised to be in the hunt for a third Asian Tour title after registering a 69 highlighted by five birdies.

“I don’t have any goals and I think that’s the reason why I’m playing good. Compared to other tournaments, I would get angry when I hit a bad shot but this week, it is different. I just want to stay healthy and see where it leads me,” said Siddikur, who won the Indian Open here in 2013.

Playing on his favourite course, the sharp-shooting Perera, who is the son of Nandasena, a famous name on the old Asian circuit during the 1980s and 1990s, hopes his good form will yield a first Asian Tour victory on Sunday.

“If someone said there is no pressure considering the position I’m in, well that would be a lie! It was a good experience for me today,” said the stocky Sri Lankan, who played in the last group for the first time on the Asian Tour.

“I played so well in the last few holes. That will give me the confidence heading in the last round. Hopefully I can do the same thing and fly the Sri Lankan flag high,” smiled Perera, who battled to a 69.

The 18-year-old Shubhankar Sharma charged into contention and credited the experience of playing on the Asian Development Tour (ADT), which is the secondary circuit on the Asian Tour.

“The 10 tournaments that I have played on the ADT this year have really helped me grow as a professional. I posted two top-10s on the ADT and the experience has given me a taste of life on the Asian Tour,” smiled Sharma, who turned professional after winning the 2013 All India Championship.

Scores after round 3 of the Panasonic Open India 2014 being played at the par 72, 6983 Yards Delhi GC course (a- denotes amateur):