Home Badminton The Great Wall of China crumbles in Vietnam 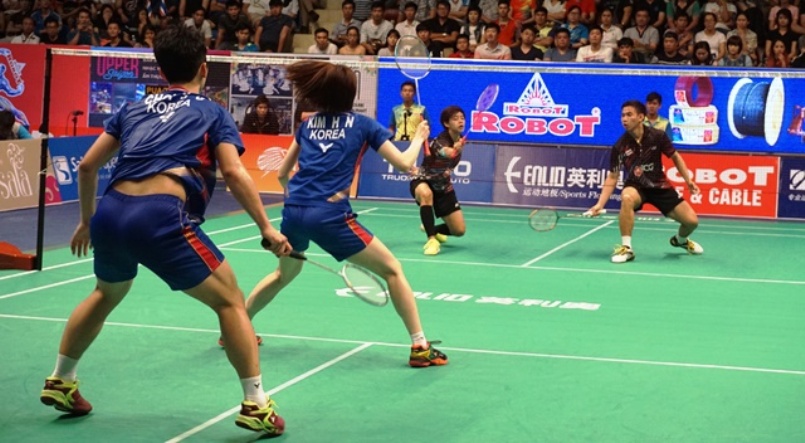 Japan crushed a favourites and top seeds China 3-1while Korea ousted Thailand by a similar margin in the semi-finals of the inaugural Robot Badminton Asia Mixed Team championhips in Ho Chi Minh City, Vietnam on Saturday.

The shock of the day was Japan’s humiliation of the mighty Chinese as the Great Wall crumbled despite taking a 1-0 lead through Zhang Nan-Chen Qingchen in the mixed doubles in a close fought encounter against Japan’s rookies Yuta Watanabe-Arisa Higashino. The Chinese won 22-20, 21-19.

“We did not expect to beat China but our fighting spirit won the match. It is very satisfying to beat the great Chinese team,” said a happy Japan head coach Park Joo Bong.

“We won here but China is still a great badminton team with players like Chen Long and Tian Houwei.”

Meanwhile, Korea coach Kang Kyun Jin believes his team has a even chance of winning the title after Japan beat China in the semi-finals.

“We will go all out in the final. It will be a 50-50 affair but I would say we have a slight edge after China’s exit,” said Kyun-jin.

The Koreans won the men’s singles through Son Wan-ho to make it 1-1 after his 18-21, 21-7, 21-19 win over Suppanyu Avihingsanon and followed it up for a 2-1 lead through men’s doubles Kim Gi-jung-Yoo Yeon-seong and clinched the winner through Sung Ji-hyun in the wimen’s singles.

“We have an even chance of winning the title now…thanks to Japan who knocked out top seeds and favourites China,” said Kyung-jin after the win over Thailand.

“It will be a good and interesting final. Both teams have an even chance but with China out we would rate our chances just a good.”

Ju-hyun completed a her mission for Thailand with a 21-12, 21-14 win over Busanan Ongbamrungphan in the women’s singles.