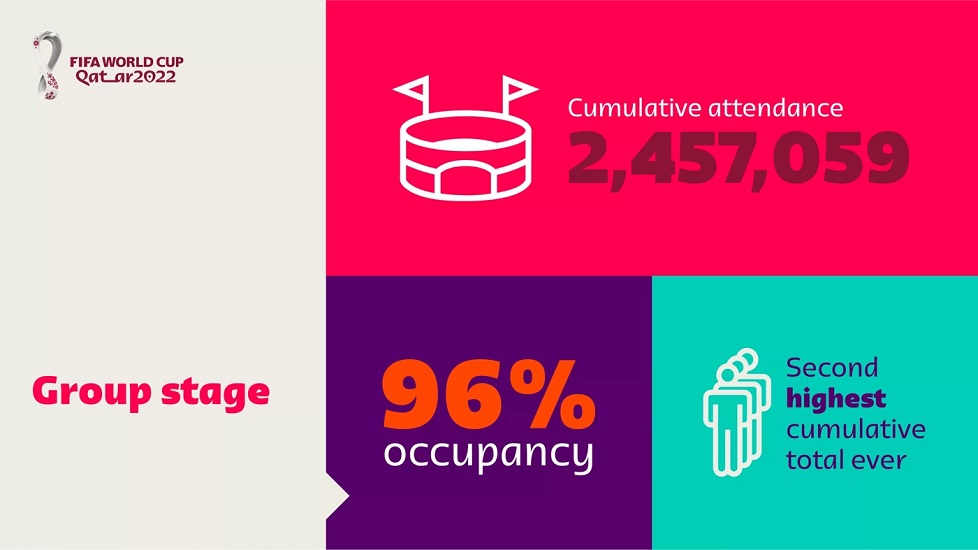 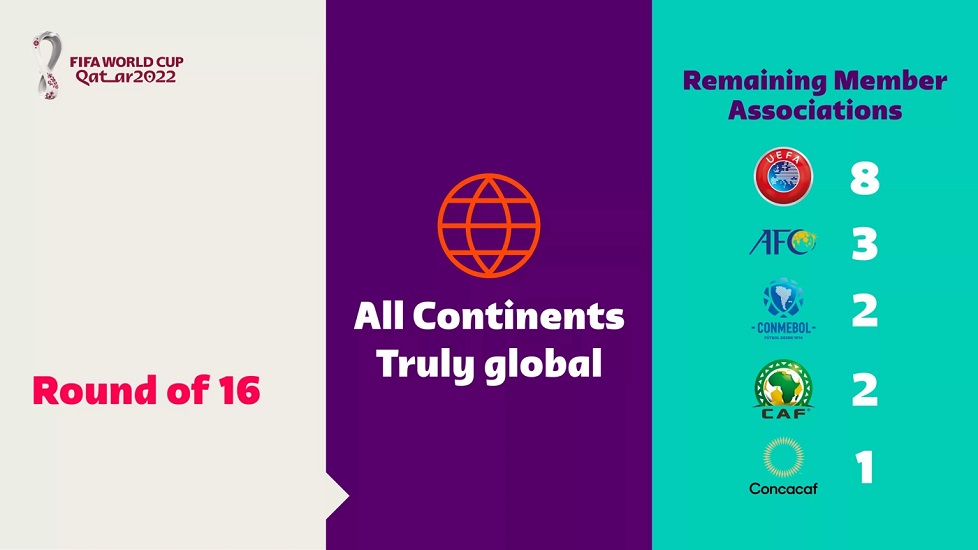 After 13 days and 48 matches, the first edition of the FIFA World Cup™ to be hosted in the Middle East and the Arab world has presented an array of facts and figures, starting with a cumulative stadium attendance of 2.45 million spectators.

That equals an average of 96% occupancy and is higher than the corresponding 2.17 million figure for the 2018 edition.

The highest attendance in the history of the FIFA World Cup since the 1994 final was seen at Lusail Stadium, where 88,966 fans witnessed Argentina v. Mexico match.

On the pitch, the FIFA World Cup has faithfully reflected football’s increased competitiveness, as for the first time ever, teams from all continents have advanced to the round of 16.

Likewise, three teams from the AFC (Australia, Japan, and the Korean Republic) have reached the knockout stages – a competition record for the Asian confederation, which previously only had two, in 2002 and 2010.

Equally remarkably, for the second time, two African teams (Senegal and Morocco) have reached the knockout stages – the last occasion being in 2014.

History was also made by Stéphanie Frappart, who not only became the first woman to officiate a FIFA World Cup match but also, together with Neuza Back and Karen Díaz Medina, formed the first all-female trio to take charge.

Against Ghana, Portuguese star Cristiano Ronaldo achieved another incredible milestone by becoming the first player to score at five editions of the tournament.

Many matches have attracted the best audiences of the year in their respective countries, with England v. USA becoming the most-watched men’s football match on US television ever.

“The outcome of the group stage shows the extent to which more countries have acquired the tools to compete at the highest level,” said FIFA’s Chief of Global Football Development, Arsène Wenger.

“This is the result of better preparation and analysis of the opponents, which is also a reflection of a more equal access to technology. It is very much in line with FIFA’s efforts to increase football’s competitiveness on a global scale.”

A world gathering in Doha

As the group stage wrapped up last night, the FIFA Fan Festival welcomed its one-millionth visitor. Besides the official tournament venues, Doha’s seaside promenade – the Corniche – has attracted more than two million people since the start of the tournament, with the traditional Souq Waqif market becoming another hotspot for fans from around the world.

Uruguayan and Korean fans can be proud of having reached a mighty 131 decibels at their match at Education City Stadium – a noise akin to that heard at a live rock concert.

The most compact FIFA World Cup since the inaugural edition in 1930 is also benefiting fans, teams, and media representatives, with the option of attending several matches and entertainment activities per day, while operations continue to run smoothly.

During the group stage, the Doha Metro and Lusail Tram networks notched up 9.19 million trips, with a daily average of 707,032 passengers.

The two international airports are comfortably accommodating the influx of fans and teams – so far, 2 million Hayyas (Fan IDs) applications have been received, with fans from Saudi Arabia, India, the USA, the United Kingdom and Mexico at the top of the list for tournament attendance to date.

In spite of the unprecedented condensed footprint, with 24 teams staying within a 10km radius of each other, players and officials have also smoothly transferred 3,321 times in and around Doha.

“It’s been a fantastic World Cup, with groundbreaking figures and memorable moments both on and off the pitch. Fans are having an amazing time in Doha, and the whole world is following with excitement on TV as new records as set every day,” said FIFA COO World Cup, Colin Smith.

“What some saw as a challenge, we saw as an opportunity. Teams, media and spectators are enjoying more matches, more festivals, more football, more fun – the compact footprint is comfortably addressing the influx of visitors through state-of-the-art infrastructure and thorough operational plans.”

“Together with the host country, we are constantly monitoring and addressing any situation that arises, but the figures already achieved and the fans celebrating together in a joyful and peaceful way throughout this group stage speak for themselves – we are on track to deliver a successful and unforgettable FIFA World Cup.” – www.fifa.com