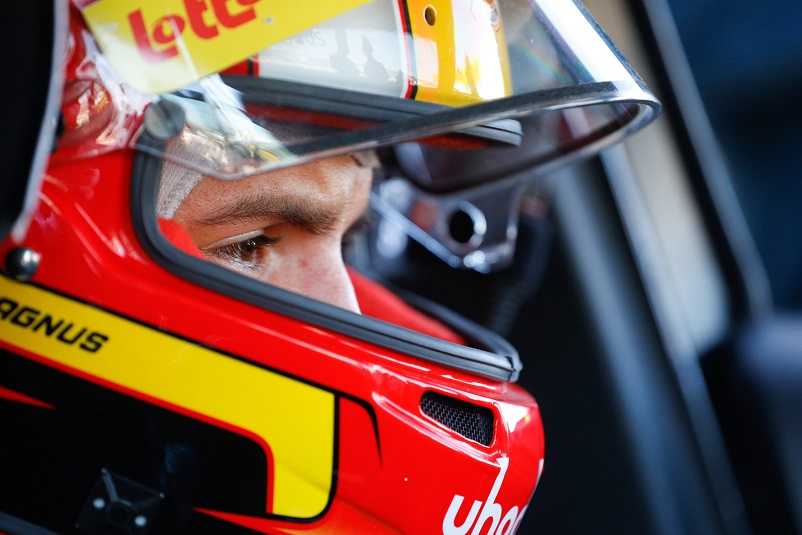 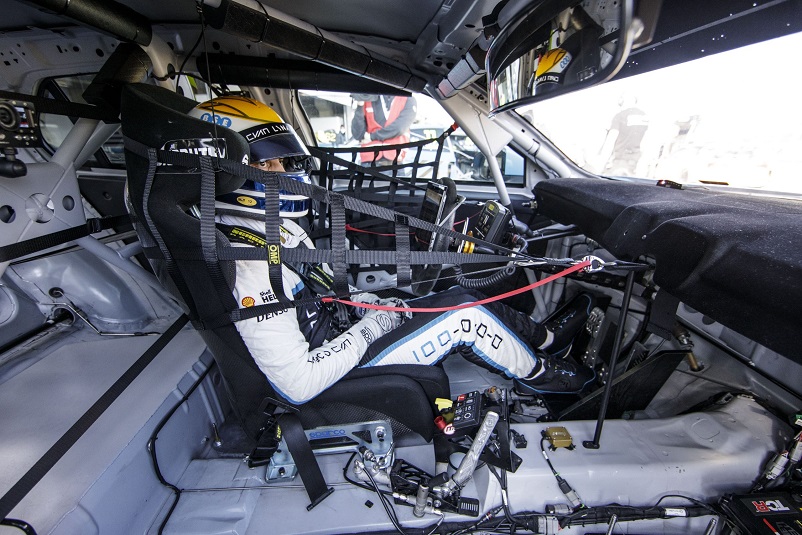 Norbert Michelisz claimed his first DHL Pole Position of the 2020 WTCR − FIA World Touring Car Cup season at MotorLand Aragón this afternoon, as Gilles Magnus profited from a penalty for Jean-Karl Vernay to land his maiden top start, with the Belgian set to line up in Race 3 at the front.

After Michelisz went quickest in Qualifying Q1, Vernay, on his 33rd birthday, set the pace in the five-way Qualifying Q3 shootout in his Team Mulsanne Alfa Romeo Giulietta Veloce TCR by Romeo Ferraris, only for a track limits infringement at Turn 5 to result in his Q3 time being deleted and handing the DHL Pole Position for Race 3 to Magnus instead.

But while it was Halloween happiness for King of WTCR Michelisz (BRC Hyundai N LUKOIL Squadra Corse) and WTCR Rookie Driver contender Magnus (Comtoyou Racing), it was a case of Halloween hell for title contenders Yann Ehrlacher and Esteban Guerrieri, who both failed to progress beyond Qualifying Q1.

Goodyear #FollowTheLeader Ehrlacher, driving for Cyan Racing Lynk & Co, was already on the backfoot after learning he would start Race 1 from the bottom of the pile following an engine-change penalty prior to the event. But in P13 he will also be up against it to extend his lead in both Race 2 and Race 3 as well. “I had a track limits violation on my first run and then a big vibration on my front left,” said the disappointed Frenchman.

Ehrlacher’s only consolation is that main title rival Esteban Guerrieri was slower, qualifying only in P19 − making it difficult for the ALL-INKL.COM Münnich Motorsport Honda driver to make up ground in the points. “It wasn’t a good session,” said Guerrieri. “We don’t have good potential this weekend, but we didn’t maximise what we had. I was compromised by a mistake on my first run and I started to get understeer, then on my last run I was on used tyres. It was a bit of a mess.”

King Michelisz back on top in WTCR
Hungarian hero Norbert Michelisz, the King of WTCR following his 2019 title triumph, set a time of 2m05.838s to score five points and secure the DHL Pole Position for Race 1 in his Goodyear-equipped Hyundai i30 N TCR.

It marks Michelisz’s first DHL pole of 2020 and his first since WTCR Race of Malaysia last year. The other points scorers in the top five were Magnus, Vernay, Gabriele Tarquini and CUPRA-powered home hero Mikel Azcona.

Magnus on form in Q2
RACB National Team driver Gilles Magnus was the fastest of the dozen drivers in the 10-minute Q2 session, to graduate to the Q3 shootout in his Audi RS 3 LMS. The 21-year-old Belgian was joined by Santiago Urrutia, Nathanaël Berthon − who jumped up the order to third after a late improvement. Norbert Michelisz was classified fourth after his disallowed lap time for an apparent track limits violation was reinstated. Vernay and Björk were fifth and sixth in the final order respectively followed by Muller, Tarquini, Engstler and Spain’s Mikel Azcona, whose capture of P10 hands him the reverse-grid pole for Race 2. Girolami and Boldizs ended up P11 and P12.

How the battle for the Q3 DHL Pole position unfolded
Vernay was the first to run in Q3, the Frenchman setting a benchmark time of 2m06.367s. Urrutia was next to go, the Uruguayan proving faster in the first sector, slower in the second, faster in the third − then slower in the fourth with a big lock-up at the final corner, leaving him 0.785s off Vernay’s time. “Stupid mistake,” said Urrutia. “But OK, I made it to Q3, which is important.”

Berthon was next to go, but was thwarted as he prepared for his run when a broken driveshaft forced him to pull over in his Comtoyou DHL Team Audi Sport entry. It was another blow for the Frenchman, who was second fastest in both free practice sessions, given that an engine change for the weekend means he will start Race 1 from the back of the grid.

Now Björk had his chance. The Swede put in a solid effort to go second to Vernay, with a time that left him 0.438s down on the Alfa Romeo.

That left Magnus as the final driver to run. The Belgian, who was fastest in both free practice sessions, didn’t have quite enough when it counted. His time was good enough to bump Björk from second, but was 0.233s slower than Vernay, whose DHL pole − and five points to go with the three he scored in Q1 − was secure prior to his post-session sanction.

Norbert Michelisz (BRC Hyundai N LUKOIL Squadra Corse, Hyundai i30 N TCR)
“It was a tricky session for us. Q1, everything felt settled, I had the confidence. But in Q2 things started to fall apart. I didn’t do a very good job, to be honest with you. I had a big sideways moment on my first lap going into Turn 1 and as I was preparing for the next lap I picked up some damage on the car, misjudging the distance to one kerb and I damaged the car. So, in the end I was left without the possibility of setting a proper lap time. For me, this is one of the most difficult circuits. Afterwards it’s so easy to say that 95 per cent would have been a better strategy than going for 99 or 100. But the problem is as soon as you sit in the car and you have the helmet on, it’s a different world. And this was the problem also from my side today, I really wanted to push hard, to grab a second pole position and in the end this approach cost me a lot, almost a lot on this circuit, because in the end it’s still okay to finish 10th from what I saw, so still things could have been worse. But I really don’t want myself to do another mistake like this in the future.”

Jean-Karl Vernay (Team Mulsanne, Alfa Romeo Giulietta Veloce TCR by Romeo Ferraris)
“I’m super-happy, it’s a nice gift I gave to myself! Thanks again to the team. Great job. We had some issue in FP2 and I was quite sure it wouldn’t be possible to participate in the qualifying, and we ended up P3 and P1. I’m really happy and I have all my family and my fiancée watching me, so I love you guys, and thanks to the team. It’s a good effort. I was really relaxed, I knew what I had to do. I know we can make mistakes, but we didn’t. There’s not so much pressure, just try to do the best we can and we’ll see where we end up.”

Gilles Magnus (Comtoyou Racing, Audi RS 3 LMS)
“Twice P2 in qualifying, we can be happy. Although in Q3 there was more. My lap was far from perfect, so sorry to the team, again, because I did the same in Slovakia. But I think it’s part of the learning process and I should not put too much pressure on myself. I’ve done a good job and shown that the speed was there compared to my team-mates. OK, my team-mate had some bad luck in Q3 and I’m really sorry for him. But luckily for him it was in Q3 and not in Q1. We’ve had out shit this season with the driveshaft in Nürburgring and with the ride height at the Hungaroring. Everybody has some shit at a certain point, and now it’s his. From the races, I think we can take some good points and win the rookie championship this weekend, that would be nice. Let’s do our best, the pace is there, so let’s do it.”

Thed Björk (Cyan Performance Lynk & Co 03 TCR)
“We are here fighting for the championship with Yann, and also with Yvan who was a little bit better than Yann. That’s a big struggle for the team. Obviously I feel good to be here, it’s nice for me as a feeling. But scoring this situation with Yann is not the optimum for us and the team. I’ve had two weekends where I was off, didn’t nail it, it was bouncing in the wrong way. To be in the position here, going for the fastest lap or to be in the top three is a fantastic feeling, all racing drivers like this, so I’m happy for that.”

Santiago Urrutia (Cyan Performance Lynk & Co 03 TCR)
“Stupid mistake. But OK, I made it to Q3 which is important. The team gave me a great car. I was sad not to see Yann and Yvan at the front, which is the main thing. But OK, now we focus on tomorrow and hope we can get big points for the team, which is the most important thing.”

Nathanael Berthon (Comtoyou DHL Team Audi Sport, Audi RS 3 LMS)
“Sometimes you have luck, sometimes you don’t. This time it was a driveshaft issue. We just broke it as we were about to start the lap. I was feeling really well, the car was really well balanced for Q3, I was aiming again to do a good lap as usual. This time it’s different. In Hungary, we found out we had a lack of performance in the engine, but it’s not the engine itself, it’s something around it. We decided to change it, just to be safe and it’s back almost to normal. But now this has happened.” 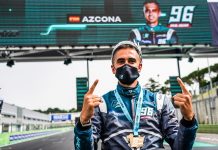