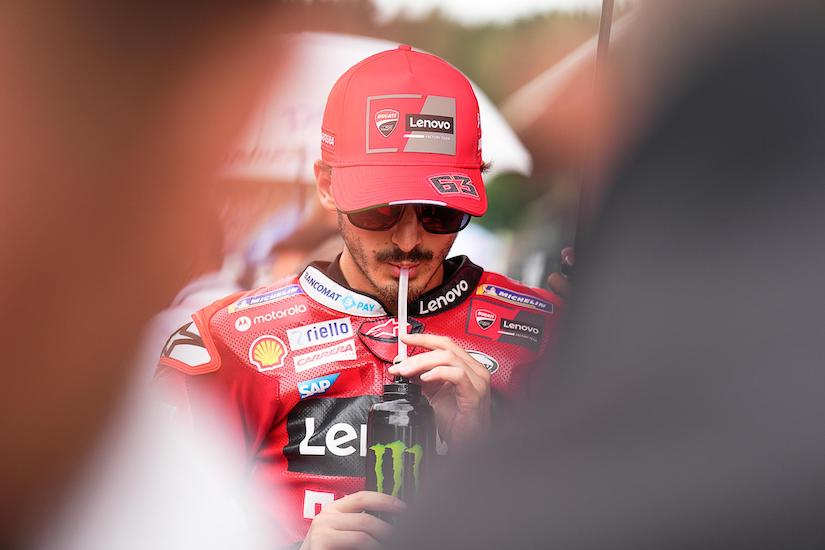 For the first time in his career Francesco Bagnaia (Ducati Lenovo Team) is a hat-trick hero after leading from start to finish in a tense CryptoDATA Motorrad Grand Prix von Österreich.

Three in a row for Pecco, Quartararo sublime

In front of 92,000 jubilant fans the lights went out for the MotoGP™ race and it was Bagnaia who grabbed the holeshot from Enea Bastianini (Gresini Racing MotoGP™), Miller slotted into P3 with Jorge Martin (Prima Pramac Racing) holding station in P4.

Quartararo got a decent start but at the end of the first lap, Maverick Viñales (Aprilia Racing) passed the Frenchman to demote the Championship leader to P6. Aleix Espargaro (Aprilia Racing), meanwhile, didn’t get a good getaway after his holeshot device didn’t engage but the number 41 recovered to P7 at the beginning of the second lap.

Elsewhere, Joan Mir (Team Suzuki Ecstar) crashed out at Turn 4 on the first lap and it was later confirmed the 2020 World Champion suffered ligament damage in his foot.

The Suzuki was sent flying from his GSX-RR on the opening lap of the Austrian GP, with ligament damage since confirmed in his right foot

The leading Ducati quartet quickly found themselves over a second clear of Viñales, who had stretched his advantage over Quartararo to half a second. It wasn’t line astern in the lead group though. Miller overtook Bastianini at Turn 3 and Martin then had a successful bite at the cherry, only for Bastianini to snap back at Turn 1 on Lap 5. Viñales then made a mistake down at Turn 4, the Spaniard dropped behind Aleix Espargaro and Johann Zarco (Prima Pramac Racing), before drama unfolded further up the road.

Bastianini looked like he had a problem going into Turn 3. Zarco did an excellent job of taking avoiding action as the Italian slowed right down through no fault of his own, before the polesitter then ran straight into the gravel a few seconds later at Turn 4. Was there an issue? It certainly looked like it as Bastianini was then forced to retire.

This saw Bagnaia and Miller open a one-second advantage over Martin, Quartararo was a further 1.3s away in P4 with Espargaro and Viñales P5 and P6. Martin was digging deep and on Lap 11 of 28, the Spaniard was right with his Ducati stablemates. Quartararo was still 1.4s behind the third of the GP22s and had main title rival Espargaro 1.1s adrift, as Bagnaia set a personal best lap to gain a 0.6s lead over Miller.

WATCH: A. Espargaro suffers lights out shocker in Austria

On Lap 14, Quartararo set his personal best lap of the race and the reigning Champion was now 0.6s behind Martin. The latter made a mistake at the chicane with 12 laps to go and was forced to give the position up to Quartararo, but did Martin then have a problem? He raised his hand coming out of Turn 4 to signal he might have but he was back at full speed soon enough.

The situation with eight laps to go was this: Bagnaia boasted a 0.9s lead over teammate Miller, who was now hearing Quartararo’s YZR-M1 swarming all over the back of his GP22 tail. Luca Marini (Mooney VR46 Racing Team) picked off Aleix Espargaro for P5, and Espargaro was coming under pressure from Zarco and Alex Rins (Team Suzuki Ecstar). Martin was still in P4, 0.6s away from Quartararo. That 0.6s gap soon became 0.3s with Martin now the fastest rider on track.

With four laps to go, a sensational move at Turn 2B saw Quartararo carve his way past Miller up into P2. Miller just held off Martin for P3 as Quartararo saw Bagnaia 1.5s up the road at the beginning of Lap 26 of 28. Starting Lap 27, Quartararo had clawed 0.2s back and starting the last lap, it was under a second!

Martin, up the inside of Miller, crashed unhurt at Turn 1 which gave Miller an easy ride home to P3. But could Quartararo do anything to stop Bagnaia from winning? No, not quite, although he wasn’t far away. Pecco took victory by just 0.4s to make it a hat-trick and reduce the gap to the Frenchman to 44 points, with Miller on the podium again in P3.

Aleix Espargaro grinds out a P6

Fourth place for Marini is the Italian’s best result in the premier class to date, he eventually held off Zarco in fifth by less than half a second. 2.4s further behind was Aleix Espargaro who sees his disadvantage to Quartararo grow to 32 points heading to Misano, but on a tough weekend for the Spaniard, it could have been worse from P9 on the grid.

Brad Binder (Red Bull KTM Factory Racing) gave KTM a P7 on their home patch, it was another solid Sunday rider for the South African, as he and Rins were separated by a tenth on the line. Marco Bezzecchi (Mooney VR46 Racing Team) claimed P9 ahead of Martin in 10th, the latter able to remount after his last lap tumble at Turn 1.

The title race pendulum is definitely swinging towards Bagnaia at this moment in time, and coming up next is the Italian’s home race at the Misano World Circuit Marco Simoncelli – a track he knows like the back of his hand. Quartararo though extends his lead, but the Frenchman, Espargaro and Bagnaia are now split by just 44 points. Game on.