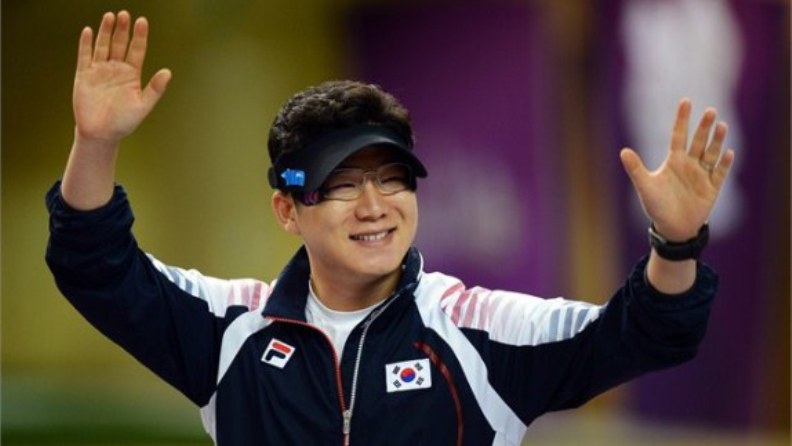 The triple Olympic champion shattered a 34-year-old world record in the men’s 50m pistol at the world championships in Spain earlier this month, before also winning the 10m air pistol title.

“The record was pretty special,” said Jin, who turns 35 next week and was just a few months old when Russian Alexander Melentiev set the previous mark at the 1980 Moscow Olympics.

“It was my first individual world title and that has made me even more confident for the Asian Games.”

Home fans will look for an encore from Jin at the Asian Games where China’s men and women bagged 21 shooting golds four years ago against second-placed South Korea’s overall tally of 13.

The Koreans had more golds — 10 to China’s nine — in the men’s competition, but managed just three in the women’s section where China were the runaway leaders with 12 titles.

There are 44 team and individual gold medals on offer in Incheon with 26 to be competed by men and 18 by the women.

The first gold medal of this Asian Games will come from the shooting range on Saturday when the women line up for the 10m air pistol final, ahead of the men’s 50m pistol event a few hours later.

Jung Jee-Hae will be the overwhelming favourite for the women’s 10m air pistol title after she won the event at the worlds, although compatriot and reigning Olympic 25m pistol champion Kim Jang-Mi is also in the fray.

China’s title hopefuls include 18-year-old wonderkid Yang Haoran, who followed his gold in the men’s 10m air rifle at the Youth Olympic Games in Nanjing by winning the same event at the world championships.

North Korea and Kuwait will look to challenge China and South Korea’s regional supremacy in the sport, having won three golds each at Guangzhou.

India, led by their lone Olympic individual gold medallist Abhinav Bindra, are hoping to translate their success at the Commonwealth Games into a bagful of medals in Incheon.

Indian shooters won 17 medals, including four golds, in Glasgow but the competition at the Asiad is tougher. Four years ago, they won just one title through double-trap marksman Ronjan Sodhi.

Bindra, who at 31 will be making his last appearance at the Asian Games after winning a gold at the Commonwealth Games, knows the task of winning medals in Incheon will not be easy.

Having failed to make the final of his pet 10m air rifle event at the world championships this month, Bindra told AFP: “I think I shot well but guys like Yang showed shooting is a young man’s sport.

“The competition is much closer now. Each shot you take matters more than ever before.”

India’s squad includes 16-year-old schoolgirl Malaika Goel, one of the youngest competitors in Incheon, who won a silver in the 10m air pistol event at the Commonwealth Games.

“I know the Asian Games will be tough, but then no one expected me to win a medal at Glasgow either,” Goel, the daughter of a police officer said.

“It all depends on some luck and how you shoot on that particular day. It does not matter if you are 16 or 60.” – Agence France-Presse