Home 2023 Kim rises to second place on FedExCup after another top-10 at The... 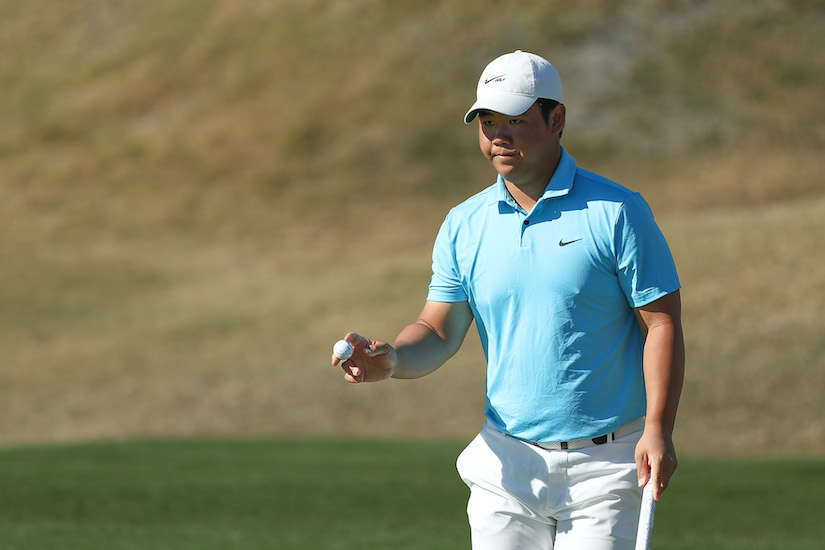 Korean star Tom Kim enjoyed his third top-10 of the season at The American Express on Sunday as Spaniard Jon Rahm proved he was currently hottest golfer on the planet with a second victory in three weeks to claim his ninth career PGA TOUR victory.

The 20-year-old Kim maintained his consistent form with a closing 5-under 67 at PGA West Stadium Course to finish tied sixth on 23-under 265, four behind the winner. Rahm, who closed with a 68, fought all day with rookie Davis Thomson before pulling ahead with a pivotal nine-foot birdie on 16 for an eventual one-stroke victory on 27-under.

Kim, who won the Wyndham Championship and Shriners Children’s Open last year to announce his arrival on the global stage, fell short of his ambitious bid to emulate Tiger Woods in reaching a third PGA TOUR victory in what was his 23rd start.

However, his strong finish has pushed him up to second place on the latest FedExCup standings behind Rahm.

Starting the day five back, Kim birdied three of his opening five holes to stay in contention but his good run came to a halt after he dropped two bogeys on Holes No. 6 and 7. He responded swiftly with a fourth birdie on the par-5 8th hole when he fired his third shot to 21 inches. Kim picked up three more birdies on his inward nine.

Compatriot Sungjae Im was Asia’s next best performer at T18  following a final round 69 for 20-under while Sony Open in Hawaii winner Si Woo Kim and Byeong Hun An closed with a 66 and 69 for T22 and T41 respectively. China’s Marty Dou signed off with a 70 for a share of 62nd place.

The day clearly belonged to Rahm as the 28-year-old Spaniard made it back-to-back wins following his triumph at the Sentry Tournament of Champions in Hawaii two weeks ago. The American Express victory was also Rahm’s second following his success in 2018.

“Body’s been feeling great. My swing’s been feeling really, really good. And it shows. Even when I’m saying I may not be as comfortable as I would like, I’m shooting 64s because everything is just firing when it needs to.

“I’m, in a weird way, glad that today went the way it went. I’ve enjoyed some runaway victories, I’ve enjoyed some comebacks, but today was certainly a struggle. Out of the five birdies I made, what is it, one, two, three of them were tap-ins and the other two were basically 6-footers. So that tells you the story,” added Rahm, who moved up the No. 1 spot on the FedExCup for the first time in his career.