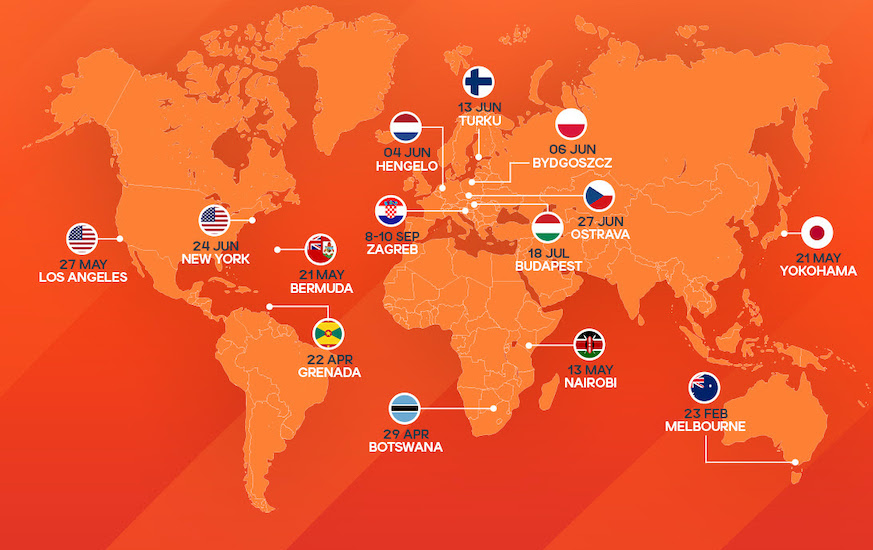 The biggest World Athletics Continental Tour calendar yet has been confirmed for 2023, with one month to go until the first Gold level meeting of the season in Australia.

More than 180 meetings are included in this year’s tour, which is divided into four levels – Gold, Silver, Bronze and Challenger. The status of each meeting is determined by the quality of competition and prize money on offer.

The schedule of Gold meetings has increased by two, with the tour’s top tier now comprising 14 events spread across five of the six continental areas. New for the Gold tour in 2023 are events in Melbourne, Grenada and Botswana. The full calendar also currently includes 25 Silver, 54 Bronze and 95 Challenger meetings.

Gold level action will kick off in Melbourne, Australia, on 23 February when the Maurie Plant Meet will welcome some of the world’s top athletes to the Lakeside Stadium. Among them will be US sprint star Fred Kerley, who stormed to the world 100m title in Oregon last year and secured Olympic silver in Tokyo. In Melbourne, the 27-year-old will test himself over 200m.

Two months later, the Grenada Invitational will take place at the Kirani James Athletic Stadium (22 April), before events in Gaborone in Botswana (29 April), Nairobi in Kenya (13 May), Yokohama in Japan and Devonshire in Bermuda (both 21 May).

One month before the world’s best athletes compete for global medals at the World Athletics Championships Budapest 23, the Hungarian capital will host some of those stars for the Gyulai István Memorial on 18 July. The 2023 Gold tour will then end at the Memorial Borisa Hanzekovica in Zagreb, Croatia, on 8-10 September.

In 2022, 11,793 athletes from 159 countries competed in the Continental Tour, establishing two area records, 118 national records and 2396 personal bests across the 152 meetings.

Highlights included Shelly-Ann Fraser-Pryce’s 100m meeting record and Continental Tour best of 10.67 at the Kip Keino Classic in Nairobi in May. That would prove to be one of a record seven sub-10.70 100m races Fraser-Pryce would achieve throughout the season.

Currently TV rights for the 2023 Gold level meetings have been sold in 140 territories across the globe and for territories where broadcast coverage is not available either live or as delayed highlights, a live stream will be shown on the World Athletics YouTube channel.