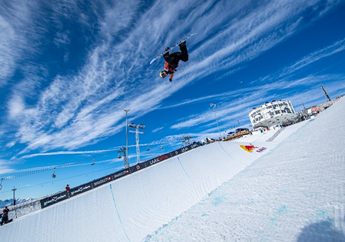 Last weekend, the freestyle snowboarders opened the World Cup season with a Big Air at Kreischberg/AUT. The crunch result on the podium also promises pure anticipation for the first Slopestyle World Cup this winter.

The Kreischberg winners – veteran Max Parrot/CAN, LAAX OPEN Champion 2017, and shooting star Zoi Sadowski-Synott/NZL – are on their way to LAAX, as are Anna Gasser/AUT, Sven Thorgren/SWE, Mons Roisland/NOR (all three were on the podium), where they are among the favourites for a place in the final.

Some of the participants are already training in preparation for the first World Cup of the season: Queralt Castellet/SPA, Maddie Mastro/USA, Leilani Ettel/GER, Andre Höflich/GER, Pat Burgener/SUI and Jan Scherrer/SUI, as well as the LAAX OPEN Winner of 2019 and 2020, Scotty James/AUS, who stands to be the first to win the renowned Halfpipe competition in LAAX three times in a row.

Several of the greats have achieved this two times in a row like Kelly Clark/USA, Kevin Pearce/USA, Peetu Piiroinen/FIN and Iouri Podladtchikov/SUI, who for the first time since the OPEN events in LAAX began (2005), is no longer causing a sensation as an active contest rider.

Instead, two different Olympic gold medallists and LAAX OPEN champions are on the entry list and aim to repeat their great victories, poised to stomp their stuff in the LAAX superpipe: Chloe Kim and Shaun White (both USA). The fact that they and over 200 riders from 25 countries will be coming to the LAAX OPEN from 19-23 January 2021 is due to the pre-Olympic season and this will ensure the competitions will be heated from the very first minute.

The athlete’s urge to compete after a long break and, above all, the perfect set-up that LAAX has always offered, even in times of the coronavirus. Stay tuned for the LAAX OPEN 2021, beginning next week!