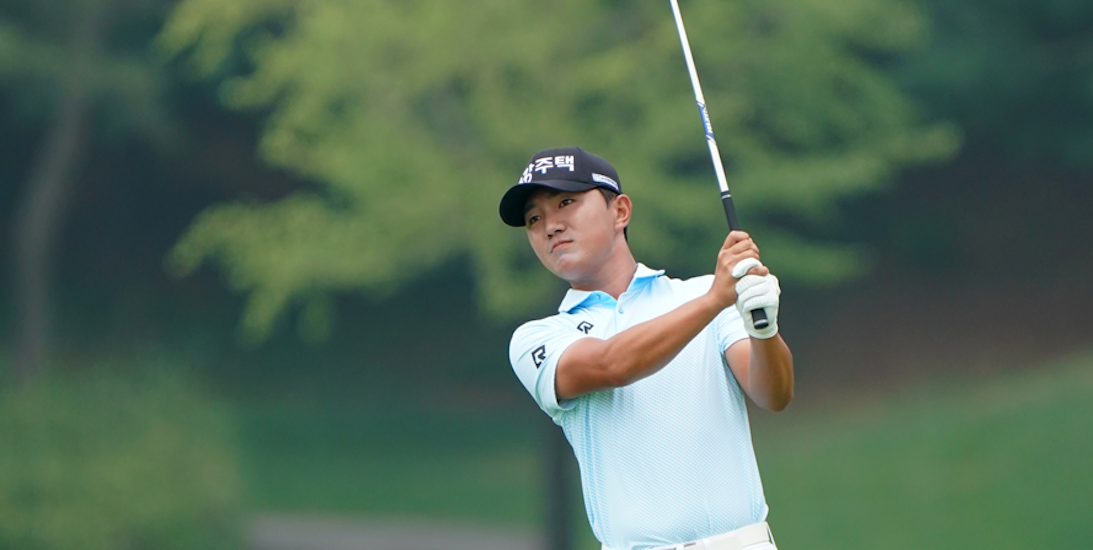 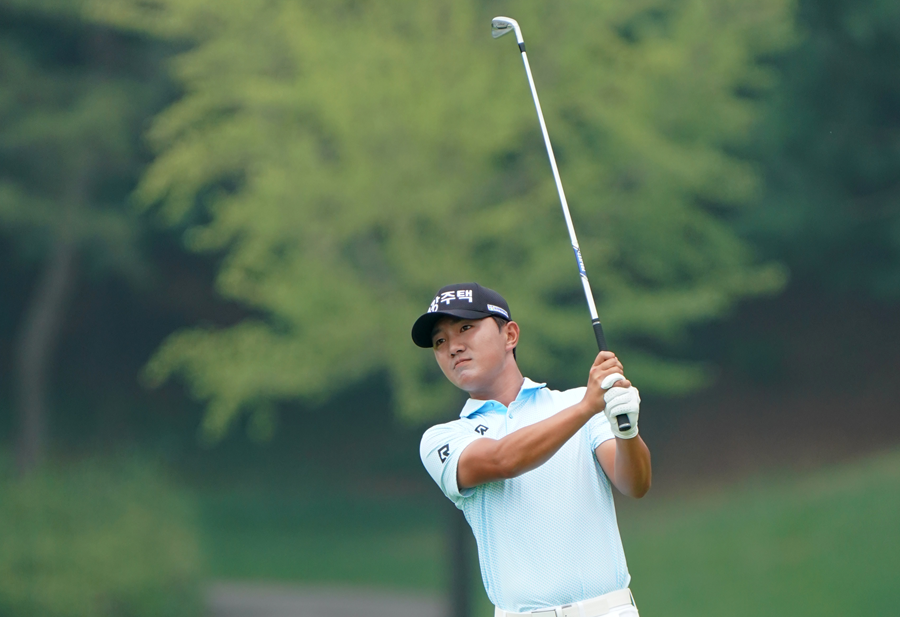 Taehoon Ok continued his rise up the leaderboard at the Kolon Korea Open at Woo Jeong Hills on Saturday, posting a one-under-par score of 70 to share top spot with a charging Mingyu Cho on five under.

Ok, a 2020 Qualifying School graduate, got off to a difficult start in the KRW1.35 billion event, posting two bogeys in the first six holes before getting his game under control. A run of three birdies in four holes brought him back under par for the day but he was unable to improve on his score.

Conditions weren’t easy, as he explained after his round. “It was very windy. The course was tricky. It was hard. I didn’t feel good with the bogey on the first hole even though I subsequently made a birdie on a more difficult hole. I was nervous because the shot didn’t go well. Your short game needs to be good here,” he added.

Ok, who finished fifth in the GS Caltex Maekyung Open last month, will be hoping to keep his emotions in check for the final round as he bids to secure his first Asian Tour win.

“I want to win, but I won’t think about winning tomorrow. I think the trophy will follow if I have a good result,” he said.

Mingyu Cho, a two-time winner on the Japan Tour, recovered from an opening bogey to post a four-under-par score of 67, lofting him from his overnight position of 10th into a share of the lead in the 64th edition of the event, co-sanctioned by the Asian Tour and the Korea Golf Association.

Cho, who finished second at the GS Caltex Maekyung Open, played a conservative round to make the move into the combined lead, and potentially a spot at The 150th Open at St Andrews.

“The aim was not to shoot over par and I did it comfortably today. It was hot out there. Pins were tricky and difficult. I just played shot by shot,” said 33-year-old Cho.

“I need to stay focused and stick to the game plan tomorrow. Final round, I don’t think it’s a good position to be in but anything is possible. I will do my best tomorrow,” he added.

“Winning is going to be tough as Woo Jeong Hills is a very difficult course. If I play aggressively, I might not be able to score but I will leave it to fate. It’s my dream to win in Korea and to win the national open. It will be nice to stay on the winner’s record after I retire.”

Defending champion Junseok Lee, who posted scores of one-over-par on the first two days, made a bid for the lead with the day’s low score of 66. The Australian pro, who won on the local Korean tour last week, could have gone even lower if it not for two dropped shots on the par three holes 7 and 16.

Six players have achieved the feat of back-to-back wins at the Kolon Korea Open – the last being Kyounghoon Lee who won in 2015 and 2016 – and Lee will be looking to make it seven tomorrow. If successfully it would also be his first Asian Tour win, as the 2021 Kolon Korea Open was only open to local players due to Covid-19 restrictions.

Thailand’s Sarit Suwannarut began with an awkward start, posting two bogeys and two birdies on his front nine, before he made a hole-out eagle with some assistance on the par 4 12th. Two subsequent birdies netted him the week’s lowest nine hole scores of 31 and a share of third place.

Explained Suwannarut: “I hit a driver on 12 and it actually hit one of the volunteers. I told her to move before hitting the tee shot but she still stayed in front of the green. Then I hit a good drive right at the flag and it hit her. Luckily it took a bounce before hitting her, she’s alright.

“The ball then landed in front of the green and I chipped it in for eagle! (Got to make it for the volunteer!) I gave her the ball and signed a glove for her after that,” he laughed.

Hyungjoon Lee, who started the day on three under, started with a birdie on his first hole but was unable to improve on his score, a bogey on his last hole dropping him back into a share of third with an even par round of 71. Junghwan Lee, also in fifth place overnight, was in a similar position and an even par round today also left him sharing third place.

Minkyu Kim and Thailand’s Nitithorn Thippong posted a pair of 68s to move up the leaderboard and grab a share of seventh place, together with Jarin Todd of the USA and Taehee Lee, who were moving in the opposite direction with dual scores of 73.