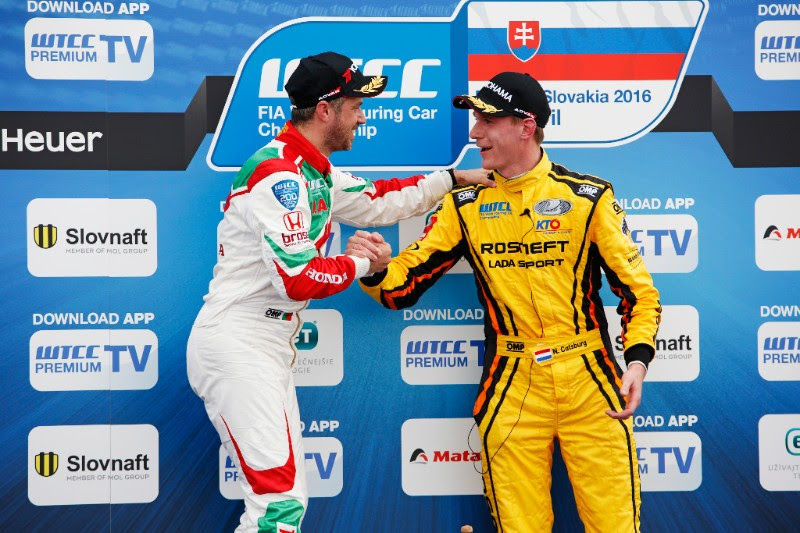 Starting on the front row after the team’s best ever qualifying result, Catsburg briefly dropped to 3rd but showed maturity skill and pace in his Vesta to retake 2nd from multiple World champion Yvan Muller. Not satisfied with that Catsburg and his Lada Vesta TC1 set about overtaking reigning double World Champion Jose Maria Lopez, and in what can only be described as a sensational, pulled off a move to undercut the Argentinian Citroen driver and take the Lead.

From then on the LADA SPORT ROSNEFT Vesta looked assured at the front of the field with Catsburg in command, even pulling away for a series of laps. With three laps remaining Lopez had closed the gap as the tyres on the Vesta had past their best condition and Catsburg was struggling to keep his car in front. Despite his amazing efforts on the final lap the pressure was telling and Lopez got by and in his attempts to re pass Lopez the Honda of Monteiro capitalized and took an opportunist 2nd place.

The Main race followed the days earlier Opening race where it was Catsburg’s teammate Gabriele Tarquini who took the plaudits with a battling 4th position, succeeding where Catsburg could not in holding Jose Maria Lopez at bay in a battling defensive drive that called on all of his skill and experience.

Catsburg had been less fortunate running wide early on and fighting back through the field from dead last to P10, whilst the third LADA driver Hugo Valente failed to capitalize on his strong practice and qualifying pace finishing just outside the top ten in the Opening race and failing to reach the flag in the Main race of the day.

But the day belonged to the hard work of the team and the hard drive of Catsburg that had projected the LADA SPORT ROSNEFT team to the front of the World’s most competitive touring car grid.

Nick Catsburg said in the press conference after the race “Of course, it would have been nice to finish P1, and I had hoped as my tyres were fading and Jose Maria (Lopez) was closing in that I could hold on for the win, but third position is an excellent result for the team and for me, my first podium in the WTCC and for LADA SPORT ROSNEFT”.

Gabriele Tarquini on his first race performance “It was a hard race from the start, a lot of good battles and I had to use everything I had to keep 4th place. The battling early on caused me to use my tyres more than I would have wanted and from the second lap I was fighting wish understeer but I am pleased for my best result for the LADA SPORT team so far and I am sure more will come”.

Hugo Valente had a more disappointing weekend having shown fantastic pace in practice and qualifying “I am very happy for the team and for Nicky! As for me, I was quite unlucky today, had a racing incident in the Opening Race, and in the Main Race I had a good start, won a few positions and then was on P6. First six cars closely followed each other and it was a very good chase. Unfortunately, I got a puncture and that was the end of the race for me. Now I look forward to Budapest event”.

Next FIA WTCC round will take place in Hungary (22-24 April).