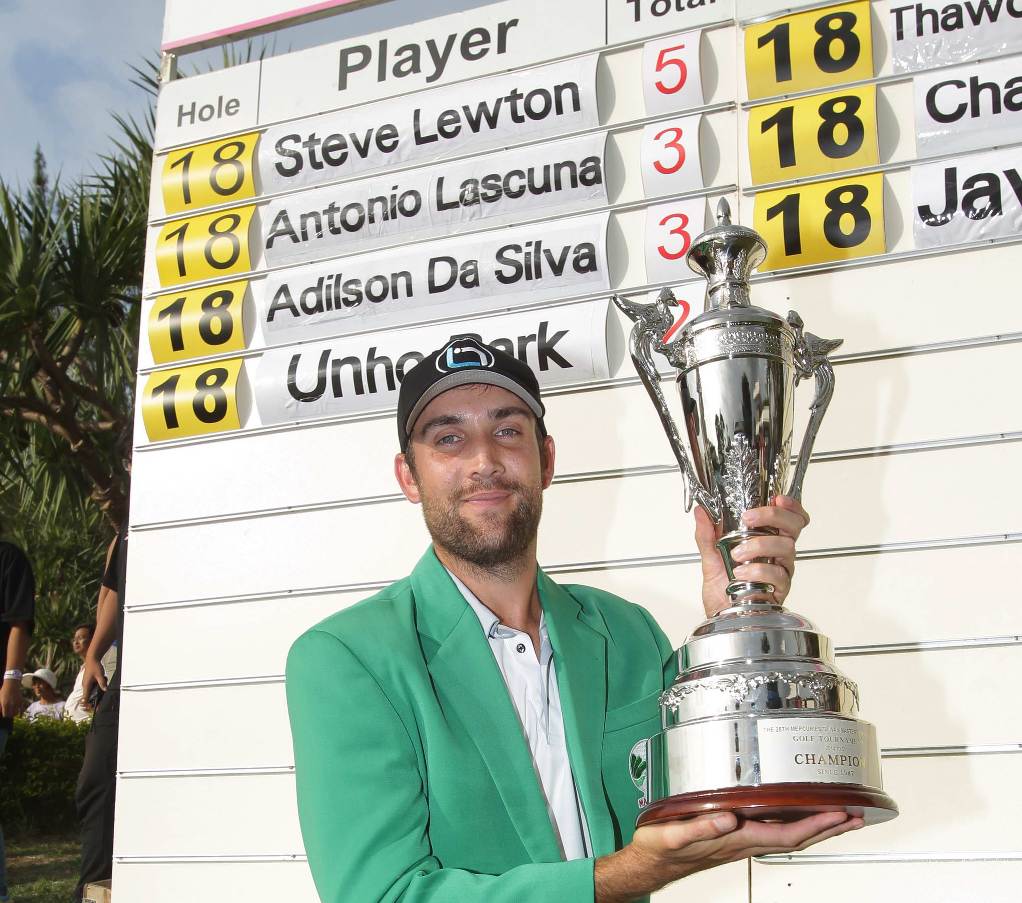 England’s Steve Lewton won his maiden Asian Tour title at the US$650,000 Mercuries Taiwan Masters after closing with a one-under-par 71 and dedicated the win to his late father on Sunday.

Lewton held on to his overnight lead after posting five birdies against four bogeys for a five-under-par 283 total to win by two shots at the challenging Taiwan Golf and Country Club’s Tamsui course.

Brazil’s Adilson Da Silva and Filipino veteran Antonio Lascuna settled for a share of second place after carding identical 72s at the long-running Mercuries Taiwan Masters, which is celebrating its 28th edition this week.

Unho Park of Australia capped his best finish on the Asian Tour so far this season when he registered a 72 to take fourth place on 286 alongside 2004 Mercuries Taiwan Masters winner, Thaworn Wiratchant of Thailand.

Lewton, who pocketed US$130,000 from his victory said, “It’s been quite a tough year for me. I lost my father at the start of the year. He was diagnosed with bile cancer about two years ago and passed away earlier in January. He was my best friend and he was also an avid golfer.

“He kept me going in golf when I was struggling in the past few years. It’s a real shame that he’s not here anymore to witness this but I’m sure he will be happy for me wherever he is,” said an emotional Lewton.

Lewton has been plying his trade on the Asian Tour since graduating from Qualifying School in 2012 and was delighted to win his first title at the Mercuries Taiwan Masters, an event which he missed the cut in the last two editions.

“It’s strange that I didn’t feel any pressure during the round, maybe because I didn’t get to see a lot of scoreboards out there. The crowd was fantastic. Everyone was cheering and clapping. They kept me upbeat in the game but I thought I will just keep doing what I am doing. It’s just amazing to win this kind of stressful event,” said the 31-year-old.

Meanwhile Lascuna was left to wait longer for his maiden victory. He claimed a tie-second finish at the ICTSI Philippine Open in May and lost in a play-off to Thailand’s Chapchai Nirat at the Worldwide Holdings Selangor Masters in Malaysia three weeks ago.

“I am disappointed for sure but I guess I have to work harder for my win. Perhaps I was not lucky enough today but overall, I’m still happy with how I played this week. I’m looking to play in the bigger events coming up,” said the 43-year-old Lascuna.

Brazil’s Adilson Da Silva is confident that his first Asian Tour victory will come soon after claiming a commendable result this week.

Scores after round 4 of the Mercuries Taiwan Masters 2014 being played at the par 72, 6923 Yards Tamsui Course course (a- denotes amateur):