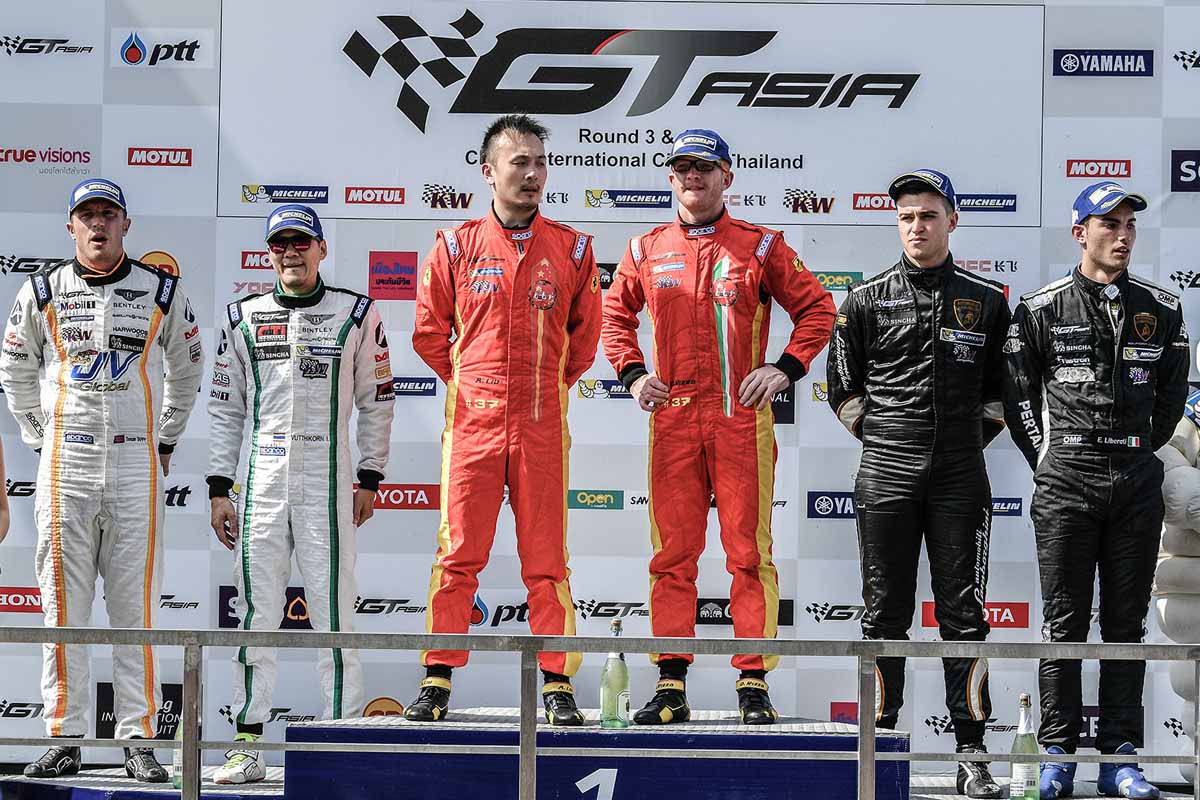 After Audi’s Marchy Lee and Shaun Thong put an end to the Bentley domination of the GT Asia Series during the opening race at Chang International Circuit in Buriram, Ferrari opened their ledger in race two, with Anthony Liu and Davide Rizzo claiming an emotional victory over 2015 Thailand winner Duncan Tappy. The fourth round of the championship was certainly a race of two halves, after an issue on circuit forced a lengthy Safety Car intervention mid-race, which all but destroyed the chances of points leader Jonathan Venter, as co-driver Fabian Hamprecht was unable to complete his compulsory pit stop until after the Safety Car returned to pit lane.

Ultimately a lengthy stop – by virtue of the parity penalty they endured for dominating the opening round in South Korea – eliminated the duo from contention, dropping Venter back behind new points leaders Liu and Rizzo in the standings.

In the GTC class, the battle continued between Porsche and Ferrari, and despite the performance deficit that the Maranello built machines felt they suffered, it was the turn of the prancing horse in round four, 2015 race winner Voravud Bhirombhakdi and new team-mate Tin Sritrai taking a popular win over the second of the Singha Motorsport backed cars – points leaders Bhurit Bhirombhakdi and Kantasak Kusiri.

Round#4 (60-minutes)
Fortunately predicted rain didn’t arrive at the Chang International Circuit, however humidty was up well over where it had been during the opening race, making conditions a little more challenging for the drivers. By virtue of setting the pole time in Saturday’s second qualifier, Liu led the field away with the FFF Racing Team by ACM Lamborghini in close pursuit. Behind them though chaos ensued in turn one, with Andrew Kim spun sideways in front of the chasing pack, fortunately without any contact, the rear bumper on the #8 Bentley providing some indication of the other car involved.

Kim was able to quickly right the #7 Bentley and set off in pursuit of the field, but with a big job ahead of him. Amici knew that his only chance to attack the Ferrari would be early in the race, so he drew alongside Liu on the run down to turn two, and tried to stick with him through the 180-degree corner, but the power of the new twin-turbo 488 was too good, Liu getting away from the Lamborghini as he put his head down and charged.

By lap three he was up by almost two seconds, with Hamprect over a second down on the Lamborghini. Behind them Alex Au had made a blistering start to be right on the tail of opening race star Piti Bhirombhakdi, whilst behind him Phoenix Racing Asia team-mate Marchy Lee was forced to recover from a spin at turn 12 on the opening lap after technical issue left him with little brake pressure. Frustration for the front row starter after holding on to third off the line.

Lee quickly mounted a recovery as Liu punched out a 1:35.400 to open up an eight second lead ahead of the compulsory stop.

For many of the amateur drivers, they hit the pits almost as soon as the window opened, but for leaders – Liu, Amici and Hamprecht – they stayed out a little longer, Hamprecht ultimately going to the end of his maximum allowable 55% race distance before firing down pit lane, but just half a lap before that happened, officials called a Safety Car intervention for an issue on circuit.

Unknown to many of the drivers who circulated behind the Safety Car not seeing any sight of a stricken car, a services cover inside turn four had become dislodged, presenting a potential danger to the teams, officials electing to slow the pace of the field whilst it was investigated, a situation which closed pit lane and froze the pit stop window, much to the frustration of the #8 team. Ultimately the field circulated for six laps behind the Safety Car, bunching the leaders which presented an interesting scenario ahead of the restart.

Rizzo led the field away, from Liberati in the Lamborghini, Tappy in the #9 Bentley and the super-impressive #98 GruppeM Racing Porsche after a spectacular opening stint by super-sub George Richardson put Tim Sugden right in the box seat. Carlo Van Dam was next in line, ahead of renowned hard-charger Richard Lyons, Adderly Fong, Alex Yoong, reigning champion Darryl O’Young and race one winner Shaun Thong.

On the restart it was game on, with Rizzo charging immediately, his greatest threat coming in the form of the fastest man to have ever circulated the Buriram circuit in a GT3 car – Duncan Tappy. Tappy was quickly through on Liberati and in pursuit of the red and yellow Ferrari which had stretched its lead to more than two seconds. Whilst the lead battle presented a focal point for the fans, so too the middle of the pack with a terrific battle brewing between Sudgen, Yoong, Lyons, Fong, O’Young and Thong, all six cars separated by less than a car length, keeping the big Buriram crowd on their feet.

Tappy got to within half a second of the leader, forcing Rizzo to dig perhaps deeper than he’d ever dug before, the Ferrari maintaining the gap at just under a second despite the menacing black Bentley with flashing headlights right behind him, to cross the line for victory and the championship points lead. The true gravity of the win was immediately apparent, with Anthony Liu jumping onto the roof of the #37 Ferrari as soon as Rizzo stopped on the main straight for the podium presentations, the Chinese driver punching the air repeatedly to the applause of his team.

Second for Duncan Tappy and Vutthikorn Inthrapuvasak was celebrated by Bentley, the team carrying #GetWellSoonAndrew on the side of all three Bentley Continentals GT3s in support of the #9 car’s regular driver Andrew Palmer who remains in hospital in the USA. Third across the line was FFF Racing’s Edo Liberati, handing he and co-driver Andrea Amici their second podium of the season, ahead of the impressive Carlo Van Dam who had claimed an pole in opening qualifying, before streaking away from the field in the opening stanza of race one.

Fifth was Alex Yoong, the former F1 driver taking over after an impressive opening stint by Alex Au, the pair recovering from the frustrations of retiring in race one after a technical issue with the gearbox forced an overheating alarm and a premature stop. Sixth was an ectastic Tim Sugden who admitted that after a five year sabbatical ahead of the opening round in South Korea, that he’d rediscovered his passion for motorsport, his young charge George Richardson (Sugden is Richardson’s manager) doing nothing to sour the team’s enthusiasm for the new Porsche GT3-R.

After watching team-mate Hamprecht work his way into the lead ahead of the pit stops, the #8 Bentley team of [then] points leader Jonathan Venter could only lament what-if post race, the team who perhaps plays strategy better than anyone in pit lane, suffering at the hands of fate. Venter was typically quick in his stint, but he could do no better than eleventh, 21-seconds down on the leaders.