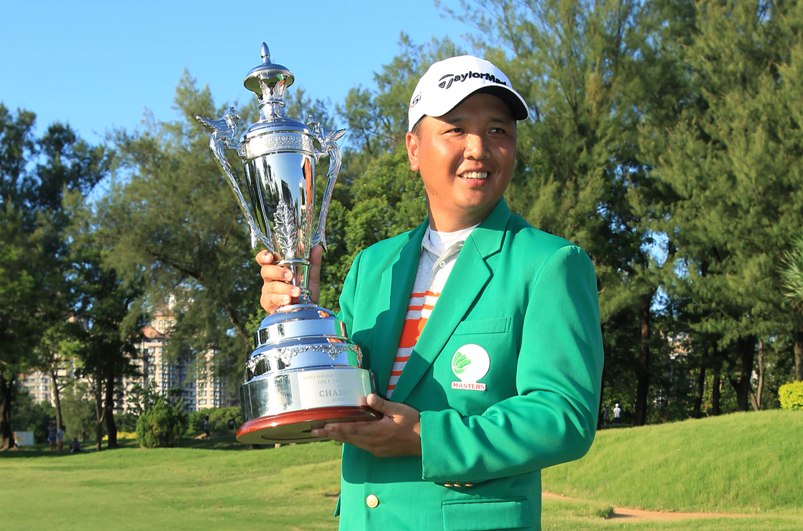 Lu Wei-chih of Chinese Taipei won the Mercuries Taiwan Masters on Sunday to revive his career after going through a brain surgery to remove a non-malignant tumour in mid-2012.

Lu battled against the odds to shoot a two-under-par 70 and win the tournament for the third time in his career with a five-under-par 283 total at the Taiwan Golf and Country Club, which is also his home course.

Miguel Tabuena of the Philippines fired a 70 to finish in second place, one shot back from the champion, while Thailand’s Danthai Boonma and Phachara Khongwatmai shared third place on 285s at the US$800,000 Asian Tour event.

Panuphol Pittayarat of Thailand, who led in the last three rounds, slipped to a share of sixth place following a disappointing 76.

The story of the day belonged to the 37-year-old Lu, who showed true perseverance to bounce back from his operation and revive his golf career.

“It means a lot to me to win this tournament. After the surgery, I thought I couldn’t play golf anymore so to be a winner again is amazing,” said the emotional Lu, who won US$160,000.

“But my family pushed me. My wife, my father and my mother kept pushing me and kept motivating me to keep fighting. I’m here today because of them. The victory is for them as well. I’m blessed to have them in my life,” he added.

Lu, who won the Taiwan showpiece in 2005 and 2011, fought back from two bogeys in his opening six holes by shooting six birdies against two bogeys including one on the last hole where he succumbed to nerves and three putted.

“At the start of the day, I was not focussed at all. I had two bogeys in five holes and my caddy told me that something is wrong with me. He said I wasn’t in the ‘zone’. I started to kick myself from there and played much better golf,” said Lu.

Tabuena continued his love affair with Chinese Taipei after enjoying another solid result in the country. He finished in tied fourth place in the event in 2011 and tied seventh in last year’s edition.

“I don’t know what it is with me and Chinese Taipei. I like courses where everybody has a chance to win. I’m still happy with my performance this week considering I didn’t have a practice round because of the typhoon,” said Tabuena.

“Lu Wei-chih deserves to win. He is a solid player and to get past the brain surgery shows that when you are down, you can get back up if you work hard. I’m glad he won,” he added.

The 20-year-old Danthai was disappointed with his poor finish when he returned with three straight bogeys to dash his chances of winning a second Asian Tour title. He had earlier charged into contention thanks to an eagle two on the ninth hole when his nine iron approach shot landed in the back of the cup.

“I played good except for the last few holes. Overall it was okay. I’m happy with the result. I was a bit tired after the front nine so I lost concentration on the back. This is a good result and I hope to continue,” said the talented Thai.

Scores after round 4 of the Mercuries Taiwan Masters 2016 being played at the par 72, 6923 Yards Tamsui Course course (am – denotes amateur):