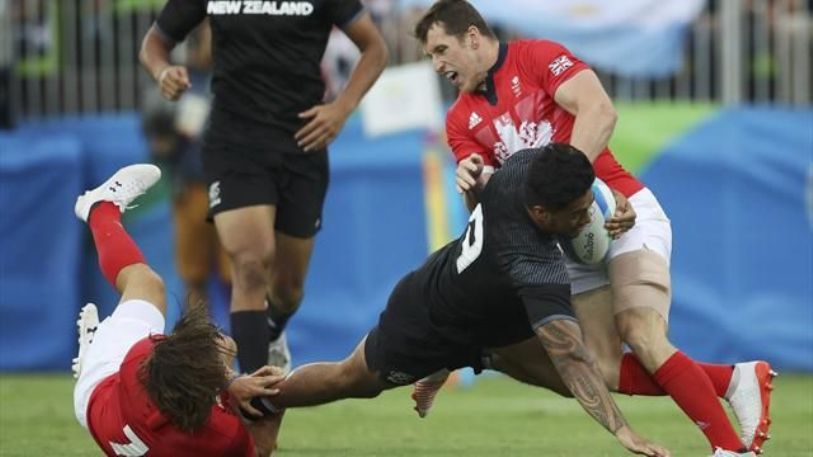 New Zealand had a missed American conversion to thank as they scraped into the maiden Olympic rugby sevens quarter-finals by a solitary point on points difference.

Having lost code-swapping star Sonny Bill Williams to injury in a shock 14-12 defeat to Japan on Tuesday, a 21-19 reverse to Britain meant the Kiwis fate lay on the outcome of the final Pool A match between top seeds Fiji and the United States.

A ding-dong battle that ended 24-19 to Fiji saw New Zealand’s hopes of making the last eight come down to US skipper Madison Hughes’ final conversion.

Hughes skewed it wide and the All Blacks advanced as the second of the two third-place finishers with just a point better difference than the US team.

Their reward is a quarter-final against the Fijians, the two-time defending World Sevens Series champions, later on Wednesday.

Japan continued their dream run with a comprehensive 31-7 win over Kenya to set up a quarter-final against France, who ran out easy 26-0 winners over Spain.

Australia were the other team to scrape through in third place after producing enough to topple eventual Pool B toppers South Africa 12-5. The two will meet again in the quarters.

Argentina finished second behind Fiji in Pool A to set up a quarter-final with unbeaten Britain.

New Zealand’s Sam Dickson tried to put a positive spin on his team’s loss to Britain, who had led at 21-0 before the Kiwis scored 19 unanswered points in the second half.

“It is disappointing — injuries and all that,” he said.

“But we don’t want to put it on that. We could easily have won that game and against Japan too. But at the time, we were not good enough.”

However, Dickson insisted New Zealand are still in the running for gold despite losing Williams and two of their three games so far in Rio.

“We are definitely good enough to go all the way.

“As we saw in that second half, we came back with 19 points against a great Great Britain team.”

“To hang on in the end, we are pretty happy. Sometimes in sevens you get the rub of the green and we took our chances really well,” said Davies.

“If you look at that first half, you have to say we’d done enough but a team like New Zealand can score five or six tries in one half. Luckily, we hung on in the end.”

Turning to the quarters, Davies said: “I don’t think there is any easy game in sevens. Look how competitive the World Series has been this year,” with six countries winning on the 10-leg global circuit. – Agence France-Presse