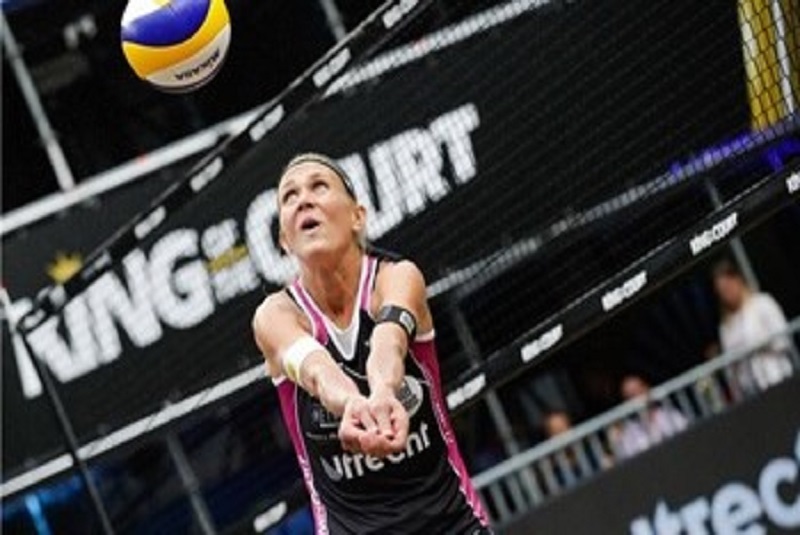 Teams from Germany, Spain, Latvia and Belgium got off to a great start at the King of the Court 2020 as they concluded the first day of the tournament in Utrecht, the Netherlands, on top of their pools.

Each of these teams has won a golden ball, which gives them the ability to replay a point that doesn’t go in their favour in the next round of the tournament.

The 2019 FIVB World Tour Finals winners Laura Ludwig and Margareta Kozuch were the first team to top their pool as the Germans won group A after they scored 14 points against Italy’s Marta Menegatti and Viktoria Orsi Toth’s seven and the Netherlands’ Marleen van Iersel and Pleun Ypma’s six in the group’s final match.

“I think the key was to just focus on our game,” Ludwig, a Rio 2016 Olympic gold medalist and 2017 world champion said. “At the beginning we were thinking too much about who was on the other side of the net and once we changed our approach and focused on doing all the things on our side well, especially putting more serving pressure, we got better.”

The other women’s team to secure the top spot in their group, B, was Liliana Fernandez and Elsa Baquerizo. Partners since 2008, the Spanish, who are guaranteed their third-straight Olympic appearance at the Tokyo Games after their success in last year’s Qualifier in Haiyang, China, recovered from a slow start to outscore Canadian twins Megan and Nicole McNamara and Swiss Olympians Joana Heidrich and Anouk Verge-Depre.

“The entire time the score was very tight,” Baquerizo reflected. “Our goal was to have a good run on the Queen’s side and we only managed to do it near the end. We were very patient as we knew the final minutes would be the most important ones. It felt so good to be playing here and to come out on top on such a strong pool.”

All six teams which competed in the pools finals move on to the next round while Switzerland’s Laura Caluori/Anna Lutz and USA’s April Ross/Emily Day, who finished fourth, are headed to the playoff stage. Dutch teams of Katja Stam/Raisa Schoon and Julia Wouters/Esmee Priem will get into a draw with the other two fifth-placed teams for the final spot in that round.

Martins Plavins and Edgars Tocs made it through one of the toughest pools in the men’s tournament as the Latvians, who are also qualified for the Tokyo Olympics, dominated group B with a final victory over Chilean cousins Marco and Esteban Grimalt and Canadians Ben Saxton and Grant O’Gorman.

“We could see in training yesterday that all the players are just very happy to be here,” Tocs added. “After such a long time, it just feels great for us to be playing again and to be with each other. That makes the tournament even more special because we all want to give our best for the fans and the people who organized such a great event.”

The most surprising pool winners on the opening day were arguably Belgians Dries Koekelkoren and Tom van Walle, who, ranked 36th in the world, upset a couple of teams with Olympic medallists in Spain’s Pablo Herrera/Adrian Gavira and Latvia’s Aleksandrs Samoilovs/Janis Smedins to top group A.

Their victory was built upon a very strong serving game, which generated several aces for the Belgians and quick opportunities to be on the king’s side.

“We just stuck to our way of playing,” van Walle commented. “We had this feeling that things were going well and every time I went to the service line, I really went for it. It was important because our serves stopped some runs our opponents were making and put us on the king’s side a few times.”

Latvians, Belgians, Spanish, Chileans and Canadians have all advanced to the next round while the Netherlands’ Alexander Brouwer/Robert Meeuwsen and France’s Arnaud Gauthier Rat/Quincy Aye are in the playoffs. Home teams Jasper Bouter/Ruben Penninga and Stefan Boermans/Yorick de Groot will test their luck in a draw with the other two fifth-placed teams to continue in the tournament.

The event continues on Friday when groups C and D and the playoffs for the men and the women will be played.