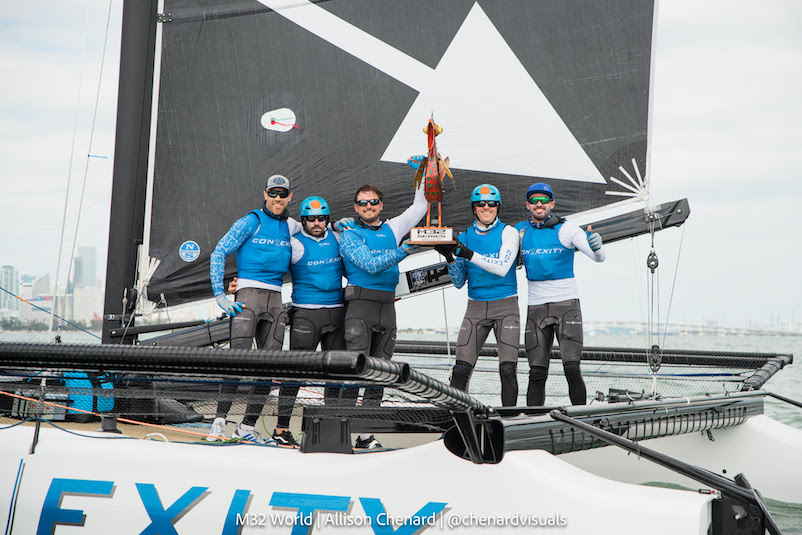 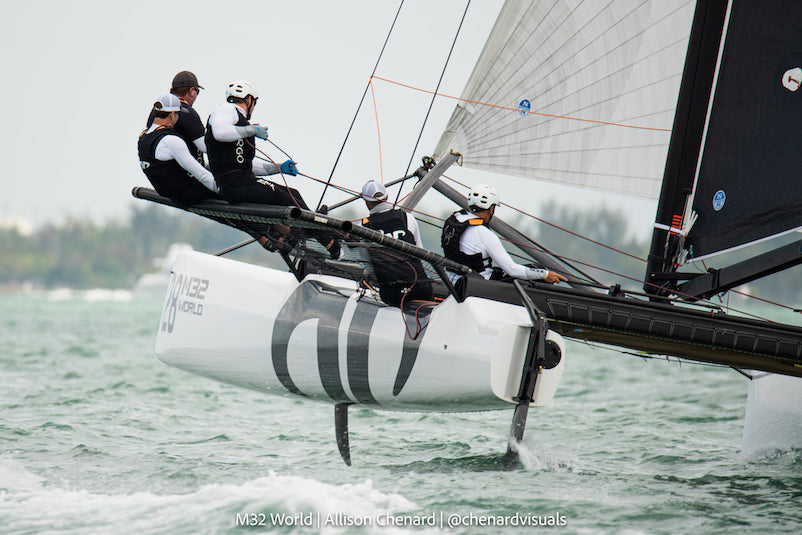 Four Weekend Winter Series
The 2021 M32 Miami Winter Series began in February in Biscayne Bay and ran a prolific 31 races throughout four weekends in February and March. Eight teams competed in at least one weekend and, going into the 4th and final weekend, Don Wilson and his team Convexity held a commanding lead in the overall series scoring.

Convexity Takes Back the Rooster
In last year’s Miami Winter Series Pieter Taselaar on team Bliksem narrowly edged out Wilson for the series trophy when Wilson capsized rounding the last mark of the last race. This year Taselaar and his team of Amanda Taselaar, Hayden Goodrick, Ricky McGarvie, and Julius Hallstrom fought hard to defend their title, but Wilson had the upper hand. Convexity’s team of Don Wilson, Taylor Canfield, Ted Hackney, Josh McCaffery, and Kinley Fowler finished 1st or 2nd in all but one race across the first three events on their way to redeeming last year’s disappointing finish.

Midtown Win Last Event
Finishing second in the overall series was Larry Phillips and his team Midtown Racing, who have been getting faster all year. Taselaar finished third in the overall series to complete the podium. New members and veterans of the M32 both contributed to a strong fleet that kept racing exciting. Ryan McKillen on Surge, Jerry Kirby and Bill Ruh on Rule Number #1, Joel Ronning on Catapult, Dan Cherish on Extreme 2, and Jason Carroll on Argo all showed themselves worthy of stealing a race from the leaders.

Safe Racing in a Pandemic
Fully-umpired races kept competition honest and the signature camaraderie of the M32 fleet was felt warmly by all. This year’s series did look a little different than it has in the past. The fleet was noticeably smaller and the usual on-shore carousing was missed. However, all teams were appreciative of the opportunity we have as sailors to be able to compete in an outdoor sport.

A big shout out goes to Shake-A-Leg Miami for hosting the boats and this series. Also a big Thank You to the Race Committee and Umpire team; Carol Ewing, Bill Canfield, Tom Geisler, Remy Donraadt and Nathan Housberg. The M32’s are headed next to Newport in June for the first stop of the Midtown Cup and will return to Biscayne Bay in November for the 2021 M32 World Championships.

The perfect introduction –  M32 Demo Boat
The M32 Demo Boat is the perfect way to get introduced to M32 racing in a way that is tailored to your background in racing and other classes. Maybe you have your own racing team and just need a few hints on M32 specifics, or maybe you need help with setting up an M32 experienced crew and start from the beginning with multihull racing.