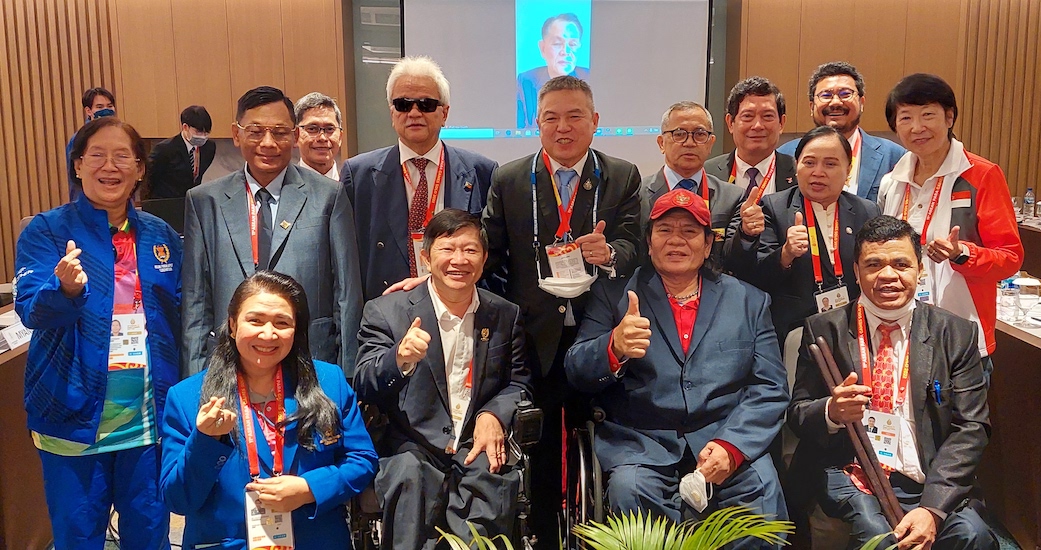 A total of 10 member countries had cast their votes in the Exco election which was previously postponed due to the cancellation of the last Games in Hanoi caused by the pandemic.

Earlier, the Board of Governors convened the General Assembly which discussed the sports programs and future plans for the Federation.

Osoth has been a long-time member of the APSF Board since its inception in 2001 and holds a Master’s Degree in Art. His long-term involvement in the Paralympic movement includes serving the Thailand contingent as its Chef-de-Mission in several major Games including the Paralympic Games.

APSF, which acts as governing body for the Paralympic movement in South East Asia, is made up of ASEAN countries comprising Brunei, Cambodia, Indonesia, Laos, Malaysia, Myanmar, Philippines, Singapore, Thailand and Vietnam. Timor Leste is a provisional member of the Federation.

The four Vice-Presidents elected for the 2022-2026 term are Philippines’ Walter Francis K. Torres, who won the Vice-President post for Sports Committee unopposed.

Myanmar’s Dr Than Than Htay also retained the Vice-President’s seat for the Medical and Sports Science Committee (MSSC) after winning uncontested.

Senior Colonel Dr Wandee Tosuwan was re-appointed APSF Secretary-General. The appointment of the secretary-general is the prerogative of the elected president.

Maj Gen Osoth, in his remarks after retaining his post, thanked members of the Board and Exco for their trust in him to continue to helm APSF for another four years.

“We look forward to working closely with all parties and stakeholders towards the organisation of future Games including next year’s ASEAN Para Games in Cambodia, the 2025 Games in Bangkok and other championships in the region,” he said.