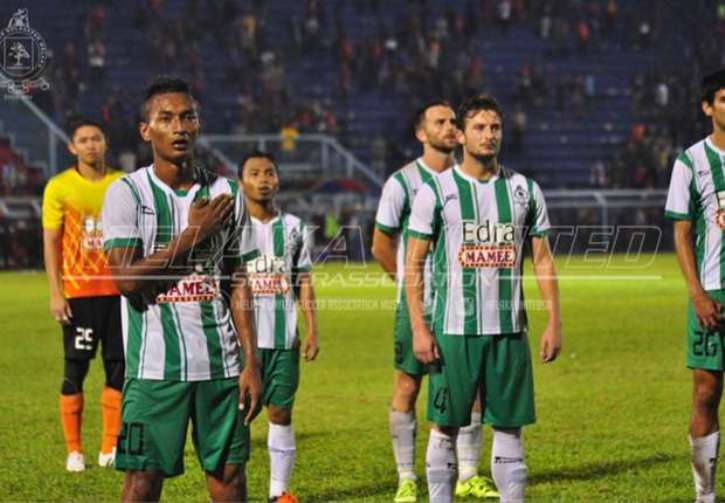 # K. Lumpur on top on goal different with 5-1 win over Armed Forces

It has been a bad week for Malacca football. First their reserve goalkeeper Marco Petrovski passed away on Sunday after being struck by lightning during a training session on April 5.

On Tuesday, the FAM Cup champions last year, surrendered their place on the top of the 100PLUS Premier League after a 2-1 defeat to Perlis at the Tuanku Syed Putra Stadium in Kangar in an afternoon match – Malacca’s first defeat in 10 matches.

With the defeat Malacca slipped to second place with 21 points – behind Kuala Lumpur who have a better goal difference after their huge 5-1 win over bottom-placed Armed Forces – who are still searching for their first win – at the Selayang Stadium.

FA Cup finalists PKNS FC shared the spoils in an eight-goal thriller with a 4-4 draw with Kuantan FA at the Hang Jebat Stadium in Malacca while Negri Sembilan were held to a 2-2 draw by Sabah at the Tuanku Abdul Rahman Stadium in Paroi.

Malacca had a dream start to their match in Kangar when R. Surendran gave the visitors a first minute lead. However, Perlis shocked their visitors in a two-minute spell with Kayne Vincent equalising on 88 minutes. Hardly had Malacca recovered they were hit again in the next minute when former Felda United player Edward Junior Wilson scored.

PKNS FC who will face Super League champions and AFC Cup winners Johor Darul Takzim in the FA Cup final at the Shah Alam Stadium on May 14, a hattrick by Chile-born Palestine international Matias Hadwa was not good enough for full points.

Hadwa, who played a sterling role in the 2-1 win over Perak in the second-leg FA Cup semi-final for a place in the final on a 4-3 aggregate, scored in the 16th, 54th and 61st minutes with Argentine hitman Gabriel Guerra, getting one in the 41st minute.

However, Kuantan shared the spoils with goals by Dao Bakary (7th minute), Srdjan Vidakovic (15th), Hazwan Fakrullah (49th) and Shafiq Razali (76th) kept them in the hunt for a top five finish and a place in the Malaysia Cup.

Kuala Lumpur ran riot against Armed Forces with five goals with Brazilian Casagrande helping himself to a brace in the 36th and 50th minutes while Helmi Remeli (14th), Hafiz Johar (37th), and Leo Carioca (49th) got the other goals. The soldiers replied through Venice Elphi in the 21st minute.

Negri Sembilan failed to grab their homeground advantage after coming back from a one goal deficit when Maxsius Musa gave Sabah the lead as early as the 5th minute. The homesters were 2-1 in the lead with goals by Andrew Nabbout and Joel Chianese in the 41st and 69th minutes respectively. Sabah scored their second through Ummareng Bacok 10 minutes before the end to share points.

At the Pasir Gudang Stadium a penalty goal by Paulo Rangel in the 53rd minute gave JDR II full points against a gritty UiTM FC for their sixth win in 10 matches.