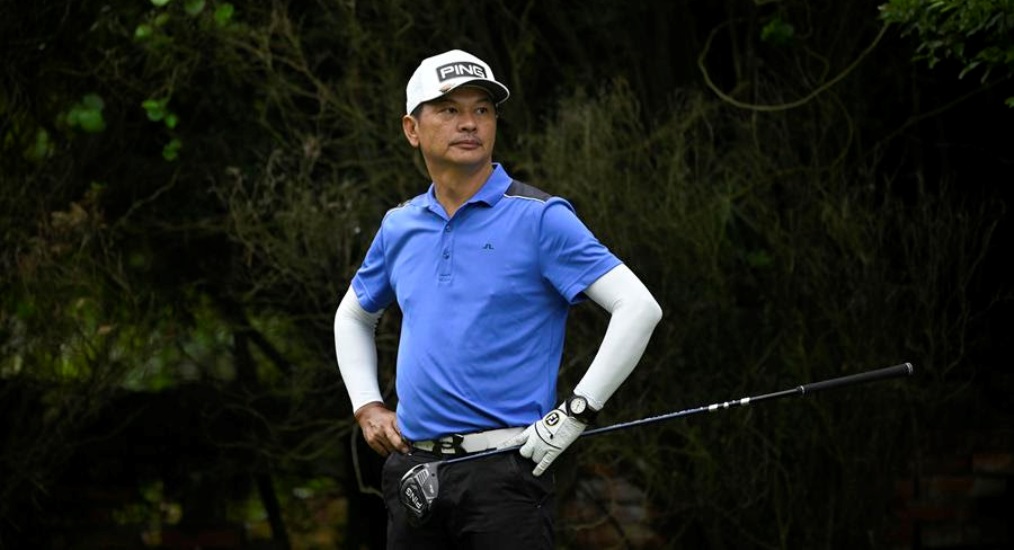 Six-time Asian Tour champion Lin Wen-tang competes in this week’s Mercuries Taiwan Masters – an event which he won in 2009 and finished runner-up in 2018 and 2005 – short on playing time on the Asian Tour, nursing an injury but all the better for being able to spend more time with the family.

“Everybody knows that COVID-19 is very dangerous,” said Lin.

The 48 year old played in the Yeangder TPC last week where he finished tied 39th, a solid performance considering it was his first tournament back for 10 months following a shoulder injury he got from working out in the gym.

He adds: “Yeah, my wife told me for the last three years you go to travel all the time, and now every day you stay at the house. So, my wife was happy, and my friends were happy. Because we always wanted to go together as a family, always wanted to go somewhere. Now I just go to play the Chinese-Taipei Tour sometimes, go to eat some good food and enjoy my life.”

The iconic Taiwan Golf and Country Club is well known for being one of the more demanding layouts on the Asian Tour, but the past champion knows how to tackle it.

Says Lin: “Everybody knows the wind is very tricky at the Tamsui golf course. I mean the fairways are small and the greens are sometimes a bit difficult. Last month they were good, but they aerified them since, so now maybe a little bit better. So, we hope they will be good this week.”

“On the difficult holes number 12 to 14, because the wind always changes, you need to hit a low ball and you need good chipping and putting. You also need to hit it straight. Make the cut first, and I don’t know, just do it.”

Turning 50 in June of 2024, Lin still has his sights set on the Senior circuit in the U.S., although the shoulder injury means it is not a certainty.

“I want to go, and my sponsors told me to go to the PGA Tour Champions in America, but I injured my shoulder going to the gym, and now it’s not so good. I don’t know, maybe I’ll try. Maybe after a year I will try to see how I feel. If no chance, I’ll just pay local events” he says.

Even if the plans to go play in the U.S. after turning 50 don’t materialize, he still has had a career full of moments to be very proud of, such as winning the 2008 DP World Tour co-sanctioned Hong Kong Open against future Major winners Rory McIlroy and Francesco Molinari in a playoff.

He did so by hitting a miracle shot out of the left trees to four feet on the first playoff hole to match McIlroy’s birdie and wedged it to a foot on the second playoff hole for the win.

Says Lin: “Yeah, I always remember the Hong Kong Open, because on the first playoff hole my lie in the trees is very bad. So, I needed to get lucky, I just remember that God helped me.”

He adds: “I remember McIlroy telling me it’s a very good shot, and maybe at that time he’s one of the best players in Europe. So was very happy because he is a good player, I have played with him three times. Now I have the video in my phone, sometimes I look at it and it just makes me happy, because it’s a long time ago. My family told me just last night, we all enjoy the 2008 Hong Kong Open. So, I mean it’s just very important in my life.”

The banner season of 2008 saw Lin finish the year 49th in the Official World Golf Ranking (OWGR), which meant an invitation to the Masters  the following year – a lifetime experience for the Chinese Taipei player.

“Everybody told me at Augusta the greens are very fast, but I just enjoyed it because for a long time no Chinese-Taipei player could go to America and play the Masters,” he said.

“I very much enjoyed the Masters week, because my friends and sponsors came with me too so we just enjoyed it. There were a lot of spectators, guests and sponsors, so I was a bit nervous on the first tee. I had to put the ball on the tee three times on the first day.”

Lin also had the honor to represent Chinese-Taipei in golf’s return to the Olympics in Rio in 2016, one of many great moments in an accomplished career since turning professional in 1996.

Said Lin: “Now I’m just happy because I’m 48 and I’ve played in the Olympics and the Masters, sometimes in Europe and America. I’m happy with my life, maybe I’m finished but I don’t know.”