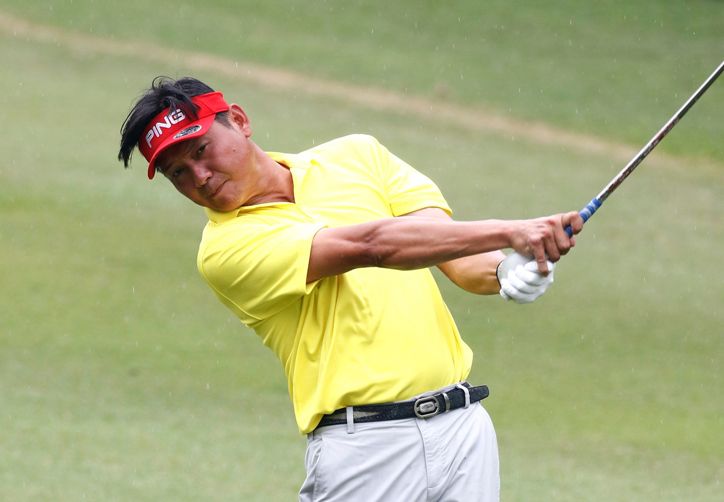 Lin Wen-ko of Chinese Taipei continued to dominate the Ambassador ADT when he fired a seven-under-par 65 to open up a massive 11-shot lead after the third round on Saturday.

The 41-year-old Lin, who is the younger brother to Wen-tang and the 2003 Taiwan Masters winner, posted five birdies and one eagle to lead on 19-under-par 197 at the US$120,000 Asian Development Tour (ADT) event.

Poom Saksansin of Thailand and Johannes Veerman of the United States carded matching 68s to share second place while James Byrne of Scotland, Chen Hao-sen of Chinese Taipei and Sam Cyr were a further shot back on 209 at the Hsin Feng Golf and Country Club.

Lin birdied holes four, eight, 10 14, 18 and eagled the ninth hole from 10 feet but it was important par saves early in the round which kept him bogey-free. He has only dropped one shot in 54 holes.

The home favourite hit a wayward drive on the first hole which landed under a tree but sank a five foot putt to save par. His tee shot found the trees again on hole five but he hit a sublime shot in between the trees to escape with another par.

“When I saved par on the first hole, I had a feeling that this will be a good day,” said Lin, who credited his home course knowledge for his dominant display. “It looked like an easy round but I worked hard to stay bogey-free today.”

“It looks like it will be an easy final round because I have such a big lead now. Maybe I won’t use too use too many drivers and just use a two-iron. It is going to be an exciting last day but I think the pressure will be on my opponents and not me,” he said.

The 22-year-old Poom, a winner on the ADT, got off to a flying start when he birdied his opening two holes. He dropped a single shot on hole six but recovered with three birdies to return with his best round this week.

“Overall my game was good. I saved a lot of shots. There are times when I hit a bad tee shot but I saved par. That’s the story of my day. I’ll continue to play like how I did today. Lin is playing so well, I think he is playing on a different course,” Poom joked.

ADT rookie Veerman, who turned professional last year, stayed on track to claim a fourth straight top-five result on the ADT after posting five birdies against one bogey. He concedes that Lin has one hand on the title.

“It was good. I played with Paul (Harris) and he is a good friend. That made it a very relaxing round. Lin is unbelievable! My game plan is still to play my best but good for Lin. I hope he keeps it going. I’m just going to do my best,” said the 24-year-old Veerman.