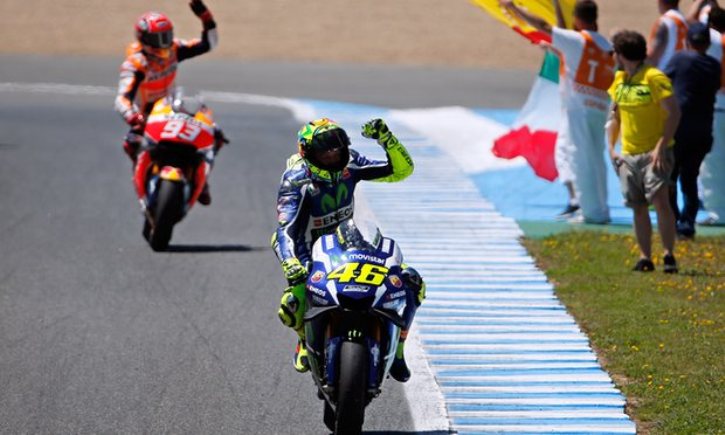 Valentino Rossi led from start to finish with a masterly ride to win the Spanish Grand Prix in Jerez on Sunday ahead of world championship rivals Jorge Lorenzo and Marc Marquez.

Rossi remains third in the MotoGP standings despite his first win in 10 races, but the Italian moves to within 24 points of championship leader Marquez and seven points of Yamaha teammate Lorenzo.

“I had good pace, I had a good start and a win like this is a special taste,” said Rossi.

The seven-time world champion has now won nine races across all categories in Jerez, but this was his first success since 2009.

“I think this was the perfect weekend because we start to go faster from Friday morning,” added Rossi.

“We worked very well with the bike, during the race it was fantastic, so I have to thank all the team, especially my crew.”

Rossi’s fast start ensured there was no drama at the first corner before gradually pulling away to win by over two seconds.

However, Lorenzo was left frustrated at a tyre problem he believed cost him victory.

“Rossi was a bit faster than me in the beginning of the race, but in the middle I could keep the distance and when I was catching him suddenly the tyres on the straight when I went through the gears starting spinning like I had a wet tyre,” he said.

“It is a pity because at the end of the race I was very strong and I could probably won the race with a big margin, but because of the spinning I couldn’t do more and I had to slow down to finish the race.”

Marquez was momentarily pushed down to fourth at the start by his Honda teammate Dani Pedrosa, but quickly recovered to ensure his place on the podium for the fourth time in as many races this season.

And the two-time world champion was happy to settle for third on a weekend where he struggled to match the pace of the Yamahas.

“I pushed behind Lorenzo, but I tried one, two, three times then I thought, ok, 16 points is good for the championship and those two guys were faster today,” he said.

“The most important thing is that we are leading the championship, so for that reason I am happy.

“In front of all these fans I expected a better race, but today was impossible.” – Agence France-Presse